2011 Devils Offseason: UFA Goalies & Why Re-Signing Johan Hedberg Would Be A Good Idea

Share All sharing options for: 2011 Devils Offseason: UFA Goalies & Why Re-Signing Johan Hedberg Would Be A Good Idea

While the main UFA concern on the New Jersey Devils may be Andy Greene, the Devils will definitely have to do something about the goaltender position in this offseason.  Martin Brodeur is 38 and will enter the last season of his contract in 2011-12.  Johan Hedberg was signed last summer to be the team's back-up and did a fairly good job all things considered.

However, the man we call Moose signed a one-year deal and so he's an unrestricted free agent once again at the young age of 37. Moreover, as reported by Tom Gulitti earlier this month, Hedberg would like to remain close to his family but would also like to stay in the NHL. I'm not ruling him out, I'm just saying he's not the guy right away.. I don't think promoting someone in the organization is a viable option either. Josh Jeff Frazee and Mike McKenna - also a UFA this summer - seemed to struggle in Albany.  The rest of the goalies in the system (Keith Kinkaid, Maxime Clermont, Scott Wedgewood) have yet to play professional hockey.  One way or another, the Devils are signing someone to play behind Brodeur.

Interestingly, Lou has spoken on this issue.  As he told Tom Gulitti recently, he seems to want Moose to return for another season.

How about potential unrestricted free agents such as defenseman Andy Greene and Johan Hedberg?

"They’ve all done well. Andy is certainly someone who we want back and certainly Hedberg we want back. He did an exceptional job. All of these things have to be handled accordingly."

I don't know whether Lou researched the market closely before answering this question, but the numbers appear to back up his wish.  Johan Hedberg is definitely one of the better options available in this upcoming class of UFA goalies.  Find out where he stacks up along with other goaltending thoughts after the jump.  Please set your viewing to "wide" before continuing. 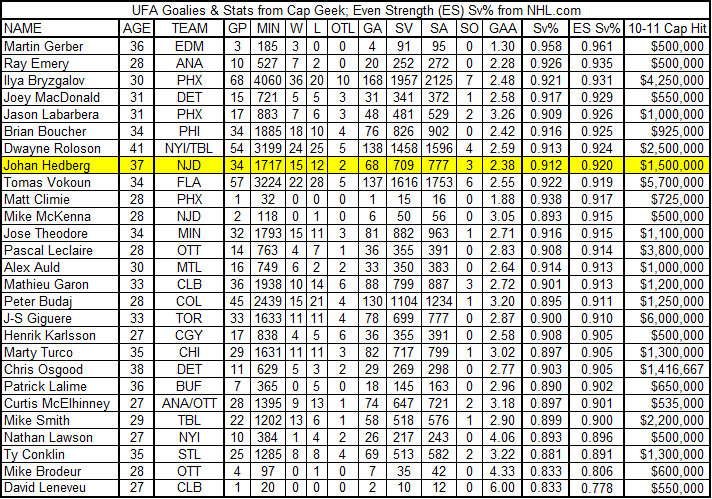 My main conclusion is that there's a lot of question marks for the UFA goaltender pool for this summer.  I sure would hate to be supporting a team that's looking for a starting goaltender, as the best options are Ilya Bryzgalov and Tomas Vokoun.  After those two, there will be some considerable risk as the only other UFA goalies to have played more than 40 games last season were Dwayne Roloson, who's 41, and Peter Budaj, who apparently was bad.   After those four, it's back-ups and guys who just got a cup of coffee.  In fact, there's more guys who played less than 10 games than those who played more than 40.

Anyway, let's focus on the Devils' situation. What do they need in a back-up goaltender? I think they need someone who can handle about 35 games at the most, should Brodeur sustain some injuries like he did last season.  At the same time, the potential signing must be prepared to sit out for long stretches because Marty is playing like he normally does and so he deserves to keep playing.  There's a lot of gray area but it would be wise if the Devils get a solid "Plan B" as Hedberg eventually turned out to be last season.  A big benefit of re-signing Hedberg is that he understands this situation and isn't put off by it.  If they go with someone else, then they'll have to be prepared for that.  That belies an experienced goaltender as opposed to a goaltender who has plied most of their career in the AHL and looking for a shot to break through (e.g. Matt Climie, David Leneveu, the many UFAs who didn't even get a NHL game last season and so aren't in this chart).

The Devils also need to make sure that this back-up goaltender doesn't cost a lot on the team's cap.  Hedberg's $1.5 million last season was the seventh highest among UFA goaltenders.  While plenty of goalies will have to settle for much less - especially J-S Giguere, Pascal Leclaire, and Mike Smith - the Devils should look to get someone for not much more than a million.  Most of the UFAs on this chart cost about that or less to their team's cap last season; the Devils shouldn't have too much trouble getting a relatively cheap goalie from this pool.   Let's hope they don't hand $1.5 million to a guy who would take $1.1 or $1.2 million.

The Devils to have a long-term issue to consider: the team's plans at goaltender after Brodeur's contract ends after next season.   Does Brodeur keep playing?  Whether he does or not, do the Devils plan to make this guy a stop-gap solution until the next starting goaltender emerges? Do the Devils just want to get a back-up now and plan to answer that issue next summer when the situation is clearer?

Regardless of what the team's mindset for the bigger picture, I think it would be a dumb move to make a play for a starting goaltender. There aren't that many and the only two good ones are going to come at a significant cap hit.  Even if it is a buyer's market, I don't see how Vokoun and Bryzgalov take massive pay cuts like, say, Pascal Leclaire will probably have to do.

By the giant chart, Johan Hedberg was arguably one of the better impending UFA goalies last season.  Only 8 goalies had superior save percentages at even strength, and even that can be broken down to favor Hedberg more in this UFA class.  Martin Gerber just got called up to Edmonton for a few games and that was it - the last place team in hockey didn't think to keep him around. Ray Emery joined the Ducks late in their season and did well in his short time; though it begs the question of how he would do with more minutes.  Bryzgalov, as noted earlier, was a starting goaltender so his numbers are the more impressive by keeping up that save percentage against more minutes.  Ditto for Roloson, especially since he started his season with the Islanders.  Starters are going to be expensive even in a buyer's market for goalies; so I don't think the Devils should go after either.  Joey MacDonald and Jason Labarbera were both back-ups but didn't play a lot behind better goaltenders.  Like with Emery, it's a big question as to whether they would take more

The only guy who had a similar amount of minutes played that did better than Hedberg in this past season was Brian Boucher.   Boucher's a little younger, he could be had for a little less than Hedberg based on his cap hit last season, and he has plenty of experience in the Atlantic Division.  I would go as far as to say that if Moose isn't re-signed, then the Devils should try to sign Boucher.    Whether or not Boucher wants to leave Philly for New Jersey is another question entirely, as is his potential cap hit.  Still, his 09-10 performance speaks for itself as evidence to target Boucher as a potential #2 option in New Jersey.

There are three guys below Hedberg on this chart who I also would not mind having as Devils next season.  While they didn't perform as well as Moose at even strength save percentage, Jose Theodore, Alex Auld, and Mathieu Garon did decently enough last season and actually commanded lower cap hits than Hedberg.  Theodore also has the added appeal of once being a starting goaltender in this league. Should the situation arise, there wouldn't be any need to panic if he has to step in between the pipes.  Auld has the benefit of being even younger and possibly available for a little cheaper than Theodore.  He's bounced around the league and has gotten significant minutes as a starter for a couple seasons. He didn't stick as a starter in Vancouver (understandable after his 2005-06 season) or Ottawa (not so understandable in 2007-08?).   Garon's numbers are similar to Theodore's except for overall save percentage; and he would be a good option if Hedberg, Boucher, Theodore, and Auld all say no.

Beyond them are several goalies I would not be all that interested to see in New Jersey next season.  The Devils would either have to rely on someone who is way past their prime (Jean-Sebastian Giguere, Marty Turco, Patrick Lalime, Chris Osgood); guys who have been backups and little more (Henrik Karlsson, Nathan Lawson, Curtis McElhinney, Mike Brodeur); and goalies who don't seem to be all that good (Mike Smith, Pascal Leclaire, Peter Budaj); or goalies who played more in the AHL than the NHL (Matt Climie was the best out of all of them and as I said earlier, this would be a bad idea).

Truthfully, evaluating goaltenders is quite difficult.  Inexperienced goaltenders are so variable and those with experience have the looming question of whether they will still "have it."  Plus, there's the nature of the position.  Do well for a bit, and people will love you.  Don't do as well or get let down by the guys in front of you, and you're suddenly a guy in pads who sucks. More recently, Greg Wyshynski of Puck Daddy claimed Bryzgalov didn't show up for the playoffs by way of his bad numbers and what he saw. That's not a criticism of Wysh; maybe Bryzgalov did suck, I didn't see much of the Detroit-Phoenix series.  But this is the same Bryzgalov who is arguably the best UFA goalie on the market. He's 30, he put up a 93.1% save percentage at evens, and he can play a lot of minutes.  If a team needs a starter, then he's the first choice unless he's totally committed to Phoenix.  Even if Bryzgalov truly turned into Nikolai Khabibulin against Detroit (you know, Detroit), it's only 4 games out of 72 he appeared in since October 2010.  He'll be fine.   It's this mindset that helped led me  to review every goal against Brodeur in 2009-10 last summer.    Given that the Devils' backup could play as much as Hedberg did last season, this not an easy signing to make.  It will certainly have some impact on how the team does next season.

Which is why retaining Hedberg is a good idea.  He knows the role, he showed that he still "had it" at age 37, and, most importantly, he did better than most of the other UFA goaltenders in this past season.   Moose also has the take-it-as-you-will bonus of Lou's public support.  If he's willing to re-sign with New Jersey for another season and hopefully for a better cap hit (around $1 million), then that would be a good move.   This isn't a very good UFA market for goaltenders and the Devils are likely to do worse than Hedberg from this standpoint, even if they do get younger in the process.  Perhaps after reviewing all 68 goals against by Moose will change my mind; and I'm aware that his good numbers are driven by an awesome February performance.  He's still my main choice at this moment.

What do you think of the impending UFA goaltender class? Would you want to keep Johan Hedberg for another season?  If not, who among the UFAs do you want the Devils to sign as the back-up for next season? Please leave your answers as well as other thoughts about UFA goalies in the comments. Thanks for reading.