After the jump you will find statistical updates on Devils prospects from the Canadian Junior Leagues and stats for some of the top 2011 Draft Prospects. I will also provide the updated listing of college free agents who have signed NHL contracts.

Well, the spectactular run for Scott Wedgewood ended last week as the Owen Sound Attack swept the Plymouth Whalers 4-0. Wedgewood was unable to steal this series but still had a strong finish to the end of the year and a great playoff run. Facing over 45 shots a game finally caught up to him and the Whalers. He will likely be at the Devils development camp in June or July and should resume his career in Plymouth in the fall.

Maxime Clermont helped the Gatineau Olympiques push past Sean Couturier led Drummondville and has now re-established himself as the #1 goalie for the Olympiques. Perhaps there was an undisclosed injury during the season or fatigue that caused his poor play. Maybe losing his job late in the year flipped a motivational switch. Whatever has changed has shown up in the boxscores. With a save percentage almost .023 percent higher in the playoffs he has saved his best hockey for April. Gatineau will next play either the Quebec Remparts or Shawinigan Cataractes in the semi-final round of the QMJHL playoffs.

Eric Gelinas and Saint John beat Victoriaville in their series and move on to play the Lewiston MAINEiacs in their semi-final showdown. 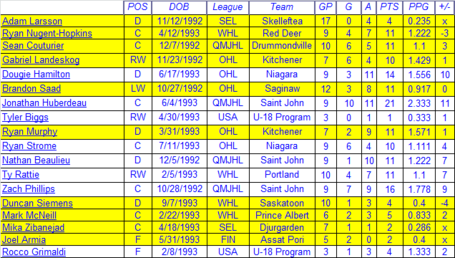 With Skelleftea (Adam Larsson), Drummondville(Couturier), and Red Deer(Ryan Nugent-Hopkins) eliminated from their respective playoffs three of the top prospects for the 2011 NHL Draft complete their season and now get ready for the NHL combine, and then the draft. Larsson's team went to the finals of the SEL playoffs but fell 4 games to 1. Larsson played 17-18 minutes in each of the 5 games.

Since Tyler Biggs and Rocco Grimaldi are playing in the under-18 World Championships in Germany I added them back into the active category in the table above. I will do this with other prospects as they enter tournaments or extend their season in some way.

Also, the ISS released/updated their latest draft rankings on 04/15. TSN.ca has it here.

I added the FA tracker I have kept for the NCAA free agents to this update. New names to look at are Minnesota-Duluth's Mike Connolly signing with San Jose Sharks and North Dakota defenseman Chay Genoway (I have just about completed the grieving process) signing with the Minnesota Wild. The only contract information I am missing is that of the Devils newest signee, Keith Kinkaid. Apparently the Devils are still wildly secretive on contracts even though there is a fixed amount/term they can offer to a player on an ELC.

That's it for this week. If you have time tomorrow, get ready from my first 2011 NHL Mock Draft. Note, that there are only four picks to this mock, as picks five through thirty don't really concern the Devils! That said despite there being only four picks I still manage to write about 2800 words. It should be a great lavoratory read.