How the New Jersey Devils were Better Under Lemaire than MacLean: Possession

Share All sharing options for: How the New Jersey Devils were Better Under Lemaire than MacLean: Possession

I don't think there is much debate over who was a better coach of the New Jersey Devils in this past season. The team went 9-22-2 under John MacLean and 29-17-3 under Jacques Lemaire.  For many, the conversation ends there - possibly with some profanity uttered about MacLean.

However, I believe leaving at that doesn't tell us a whole lot; especially when it comes to what to hope for next season.  How bad did it really get on the ice under MacLean?  How good were the Devils under Lemaire?  Most of all, how were the Devils different under each coach?  The best way to answer that is by looking at the team's stats at even strength, the most common situation played in a game.  While the two coaches were in charge for an unequal amount of games (33 for MacLean, 49 for Lemaire), the difference between the two is even more striking than their records.

The Devils didn't just get better results under Lemaire, but they were better shooters, better shot-stoppers, and better in possession in the 49 games he coached. They were simply better.   It is through these stats that bring more understanding as to why they were so successful under Lemaire and so terrible under MacLean.  The numbers and additional commentary both come after the jump.

The methodology I used is similar to when I recently showed that the Devils were (and still are) far better than Our Hated Rivals when it came to possession.  Time on Ice allows for the various 5-on-5 scripts that pull data from the NHL to be split up within the season. This makes it possible to split up games under MacLean (Games 1-33, or 20007 - 20496) and Lemaire (Games 34-82, or 20508 - 21226).  I ran the following scripts to get the data used in the rest of this post.

All Even Strength Situations: Under MacLean - Under Lemaire

Even Strength Close Score Situations: Under MacLean - Under Lemaire

Even Strength Tied Score Situations: Under MacLean - Under Lemaire

Note: These scripts do take some time to run, so if you choose to click on it, be prepared to wait a little bit for the information to appear.

Just goals alone show how big the difference was between both coaches.  Under MacLean, the team was offensively inept and bled goals at 5-on-5.  It was so horrible that I honestly winced when I first ran the script.  Surprisingly, they didn't allow a lot of shots per game; but unsurprisingly didn't take a lot of them per game.  The Devils actually got worse under Lemaire when it came to generating shots, but they were even better in shots against while improvements were made to goals in both directions.

Like the records, I could just say that the Devils were out-scored by more than 2 to 1 ratio under MacLean and leave it at that. However, possession is a far more interesting metric. How did the skaters do regardless of whether pucks went in at each direction?   The Devils were an excellent possession team by the end of the season; as Gabe Desjardens noted here at Behind the Net.   How did that break down between coaches?

Even Strength Possession in All Situations

The first two differences that I noticed were the shooting and save percentages at even strength.  The save percentage was atrocious under MacLean, and the shooting percentage was incredibly awful.  Yet, largely with the same major personnel the two percentages rebounded at least 3% under Lemaire.  The shooting percentage can be explained away by stating the team got some breaks. Since I don't think Martin Brodeur and Johan Hedberg suddenly remembered how to play goal under Lemaire, I think the improvement in save percentage may come from other sources. Some explanations could include fewer defensive breakdowns, better luck (e.g. Moose getting hot in February), and better backchecking by the forwards.

However, this is for all even strength situations.  When looking at close score situations to lessen score effects, the gap between the two coaches gets wider.

As a reminder, close score situations were defined by JLikens of Objective NHL as:

...using Corsi with the "score close" - defined as whenever the score is within one goal in the first or second period, or tied in the third period or overtime - is to be preferred.

Let's take things one step further in minimizing score effects by looking at even strength possession when the score was tied.

The MacLean Devils aren't much better than they were in close score situations.  There was some improvement, slightly better percentages across the board - even enough to get Corsi% over 50%.  Yet, the Lemaire Devils really shined when the game was tied.  All three percentages were above 55%, which is simply fantastic.

In his Vancouver-Chicago playoff preview, Gabe Desjardens found that the Devils finished with a score-tied Fenwick percentage of 53.3%, the sixth best percentage in the whole league and the second best in the East (Pittsburgh was a possession monster).  This was largely driven by the Devils under Lemaire.  Above all other percentages looked at so far; the Devils' 55.38% Fenwick percentage in score tied situations impresses me the most.

I did, however, account for the difference in games played by the two coaches.  I calculated Corsi per Game and Fenwick per Game to determine whether the percentages change (they don't) and to see what changed between the two in both stats for and against the Devils. 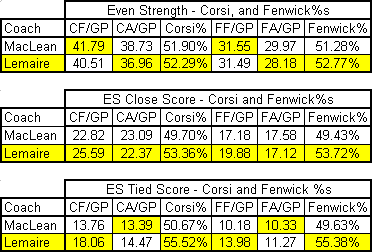 Since the percentages don't change between MacLean and Lemaire, it's more interesting to point out the differences in Corsi and Fenwick per game.  This gives some insight into what really changed from MacLean to Lemaire, which led to the big improvements in puck possession.

For all even strength situations, the Devils generated more Corsi and Fenwick for themselves per game under MacLean than Lemaire.  It was really close in FF/GP, though.  The main driver for the better percentages for Lemaire at even strength was defense. The Devils held their opposition to fewer events per game, so much so that it made up for the decrease in positive events.  That's how they came out ahead.

For close score situations at even strength, it's no contest as to what happened. Positive events went up, negative events went down, and so that's how it got better under Lemaire. I will note that the Corsi and Fenwick events per game against didn't go down that much between the coaches. The real driver here are positive events - the Devils attacked more when the score was close under in Lemaire.

Between the last two per game charts and the fact that the Devils enjoyed better shot%, Corsi%, and Fenwick% in all even strength situations under Lemaire, it's pretty impressive that improved offense occurred with the defensive-minded Lemaire behind the bench.

Likewise, while MacLean suffered from a miserable shooting percentage and a surprisingly low save percentage, the Devils didn't have the better of possession when the game was close or tied.  They weren't awful, no. However, if the shots are going in at such a low percentage and the team's bleeding goals, then it should be a priority to control the puck when the game is still even or close.  It helps out the defense and the goalie by forcing the opposition to play in their own end more often.  Not to mention that increasing volume with a low percentage tends to lead to more of those goals that were so elusive in the first 33 games of the season.

This all said, I believe the Devils are somewhere in the middle between MacLean and Lemaire.  I'd be pleasantly surprised if they get anywhere near 55% for tied score even strength situations next season. At the same time, I do expect them to do better than 50%.

I'm harping on this because possession and attempting shots are more controllable than hoping shooting percentages increase - which they also did under Lemaire.  It's evidence that Lemaire did more than just benefit from better shooting and save percentages; that he was markedly better for the team than MacLean.  It's what other fans and Devils management should recognize when hoping to get someone "like" Lemaire as the next head coach.  It's certainly something the next head coach should hope to emulate next season (and Zach Parise would really help here. Guy's a Corsi machine.)