Share All sharing options for: Whoever Coaches the New Jersey Devils Next Season Should Get Them To Shoot More at Evens

After sorting through all four seasons by shots for per 60 minutes, shots against per 60 minutes, shooting percentage, save percentage, and simple goals for and goals against, I came to the conclusion that whoever coaches the team next season should make increasing shots taken a priority.  The numbers and an explanation follows after the jump.

First, here are the league's average for all of the even strength stats I looked at from Behind the Net.

You'll notice that goals for (GF) and goals against (GA) are the same; shots for per 60 minutes (SF/60) are the same as shots against per 60 minutes (SA/60); and shooting percentage (S%) is just 100 percent minus save percentage (Sv%). This all makes sense.  Any goals scored or shots taken mean someone gave up a goal or allowed a shot.   For the most part, a team will average just under 30 shots per game at evens; shoot a little above 8%; stop below 92% of shots; and score somewhere between 150-160 goals.  T

As you may guess, the Devils have been superior in defensive stats, and inferior on offensive stats.   If you did guess that way, then the numbers agree with you. 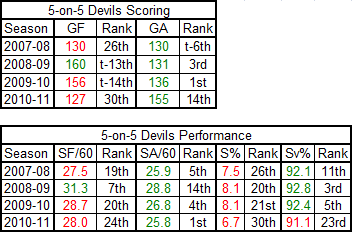 Aside: The Devils and many other teams would have been above average in goal scoring at evens in 2009-10 if Washington's 225 goals didn't skew things upward.   They followed the equation of: Lots of Shots + 11% shooting = Mad Lamplighters.  Needless to say, they couldn't keep that up.

Back to the Devils, you notice that the Devils have been excellent at preventing shots against.   They have been in the top 10 for 3 of the last 4 seasons, and even in 08-09 they beat the league average.   Getting shots against NJ has been difficult.  Getting them into the net has been tough, since the Devils had solid-to-superb goaltending in the first three seasons.  This past season is the only one with a sub-average save percentage.  However, I wouldn't immediately conclude that the goaltending went south this season.  After all, the Devils still managed to beat the league average in goals against at even strength.

I'd be more concerned with how consistently they have been relatively bad on offense.  The Devils have consistently been in the lower third of the league in shooting percentage in the last four seasons, all below average.  This past season was particularly bad since the Devils were as low as 5% early in the season.   Yet, it's jarring that the abysmal production of 2010-11 is only 3 goals less than 2007-08.  The Devils only cracked 30 SF/60 once in the last four seasons and it's the only time they beat the average.  Shooting percentage is still a main driver in that the Devils scored only 4 fewer goals at evens in 2009-10 compared to their local high of 2008-09, where the Devils put up a lower SF/60 yet remained at a percentage similar (if not exact) to the 2008-09 season.

What makes this so impressive, both positively and negatively, is that this has been consistent across three different head coaches and several changes on the roster.   Recall that Brent Sutter was the coach for 07-08 and 08-09; Jacques Lemaire was the boss in 09-10 and the last 49 games of 10-11; and John MacLean was heading the bench for the first 33 games of 10-11.  Despite tactical and philosophical differences, the organization's philosophy of putting defense first is justified by looking at these four seasons.

It's also worth noting that the Devils were successful in three of these last four seasons.  They were not only a winning team in 07-08, 08-09, and 09-10; but they won the Atlantic Division in 08-09 and 09-10 and missed out on the division in 07-08 by 3 points.  They won games mainly because of an effective defense and goaltending.   When that struggled in this past season, particularly under MacLean's tenure, the Devils cratered.  I will explain this in more detail tomorrow.

While I think the Devils will likely return to being one of the better defensive teams, it appears to me that the Devils really need to strive to score more goals at even strength.  While the Devils were a winning team in 2007-08, it's more advantageous to the team to shoot closer to 160 goals at evens than 130.  More goals means fewer close games, games with larger leads, and more wins.

To do that, the Devils really should stand to take more shots at even strength.  I do believe the Devils will shoot better than 6.7%. However, I wouldn't expect the Devils to start shooting at league average or better based on the other three seasons.  Besides, luck is a significant component of shooting percentage and it really can't be controlled as much as we'd like to think we could.   It's more practical, if not plausible, to have the team increase their SF/60 to get more goals next season.  This way, even if the shooting percentage remains below average like it has been, the Devils can make up for it in volume.

A healthy Zach Parise might help with that. After all, he's been a shot machine in his last three healthy seasons.  However, he was healthy (and excellent) in 2007-08 and that team was even worse than the 2010-11 team at generating shots while not scoring that many more goals than last year's team at even strength.    Just getting Parise back won't make that SF/60 shoot up beyond 30.  It'll take a team effort.

Therefore, I look to the eventual head coaching hire this summer to make this a priority.  I'm not asking for the new hire to change the team's foundation or to blow everything up and start from scratch.  Not at all.  Just tweaks and adjustments to get the players to put more rubber on net as opposed to coming up with totally new systems.

It's not like he'll be devoid of talent in New Jersey. The Devils certainly have some solid offensive forwards: Parise, Ilya Kovalchuk, Travis Zajac, Patrik Elias (who hopefully has some more gas in the tank), and several young players with offensive skills like Mattias Tedenby, Jacob Josefson, and Nick Palmieri.  I don't think the problem is with personnel, just utilization - and a head coach can control that.

The coach will not only have to set the lines up for both attacking and defending; but instruct the team on how they should attack.   While I liked how the Devils shortened their breakouts and carried the puck in more under Lemaire, it didn't necessarily lead to more shots.  The new head coach would be wise to take that and modify it.  Perhaps it would take simple encouragement. Perhaps it would require more cycling.  Perhaps it would require a mindset of "If you're open, just fire it."   Looking at what Brent Sutter did in 08-09 and using that as a guideline might help as well.

Line-matching is another way the Devils can increase their offense.  Lemaire utilized a line of Elias, Dainius Zubrus, and Brian Rolston against tough competition in the second half of the season and kept at it as that line usually out-performed their match-up.  This also had the effect of leaving other forwards (Kovalchuk, Zajac, Palmieri) to face weaker competition.  With a returning Parise, the new coach should strive to see what match-up possibilities could still work.  Could the Elias line still handle toughs for another season? Could Parise and his linemates carry the weight? Most of all, how does the coach get it through the players' heads that those with the better match-ups need to fire away more regularly?

Ultimately, I don't just want a disciplinarian head coach the players will respect and who buys into the Devils' philosophy.  As great as such a coach would be and as much as I appreciate Jacques Lemaire, I would like the new head coach to take things a step further offensively.   Offense has been a needling point for this franchise for what seems like the past decade, with a few exceptions.  While I am not expecting a top-10 offense for 2011-12, I do think it's in the team's best interest to strive for more scoring at even strength.  In order to that, the next head coach should pushing for more shots on net.  It is a far more pro-active and more plausible goal to attain than to just hope the shooting percentage will be better or rely solely on defense and goaltending to make up for another not-so-productive offensive season.

What do you think of the team's even strength stats over the last four seasons?  Do you come to the same conclusions as I do by looking at these numbers? Do you agree with the main conclusion that the next head coach needs to raise SF/60?  If so, how do you think he should do it? Please leave your answers and other thoughts on this subject in the comments? Thanks for reading.