After the jump you will find statistical updates on Devils prospects from the NCAA, Albany, Trenton and stats for some of the top 2011 Draft Prospects.  I will also provide links to the new Central Scouting Service rankings which were released yesterday and my personal top 9 list of players I think the Devils should select. 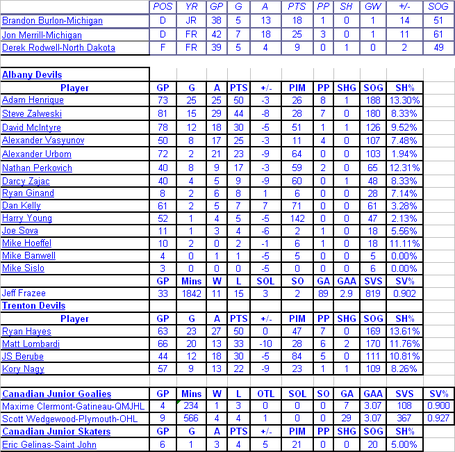 Despite being outshot and outplayed by North Dakota in the Frozen Four semi-final game last Thursday Michigan was able to survive via a Wedgewoodian effort by senior goalie Shawn Hunwick that took them to the Frozen Four Finals. After outlasting the onslaught of the Fighting Sioux it looked as if Michigan was on it's way to their 10th NCAA National Championship.  They promptly jumped out to an early lead on Minnesota-Duluth, but couldn't hold on against the fiesty alma-mater of Devils broadcaster Chico Resch.  Ultimately Michigan couldn't pull out another low scoring win and I have to think that the injuries to David Wohlberg (second on the team with 15 goals in 37 games) and Brandon Burlon really hurt them in the final.  Michigan was a team that didn't get outshot that often and taking away your #2 defenseman had a noticable effect on the puck possession in the final game. One thing I noticed watching the final (SportsNation site Maize and Blue noticed it as well) was how much time Jon Merrill played in that game.  Considering his ice-time I thought Merrill played a solid game.

The season has concluded for the Albany Devils.  A three game losing streak in the final week of the year placed Albany as the worst team in the entire AHL with only 70 points.  Their final record of 32-42-1-5 was a disappointment after they reached the playoffs last year.  Alexander Urbom and Adam Henrique were absent from the teams last two games as they both played in the parent club's home finale this past Sunday.  They also played well.  Urbom added his first career NHL goal and Henrique was a +1 in his NHL debut.  Not a bad job by the new guys.

In the coming weeks I will provide some additional posts on the players at Albany in the form of a season review, a review of about 3-4 games that will mostly focus on Mike Hoeffel, Joe Sova, Mike Sislo, Mike Banwell and Ryan Ginand and thoughts on Albany's depth chart for next season.

In the Q the Saint John Sea Dogs made big news in the past week by losing a game.  That's right, they have been so good this year it's news when they lose.  Despite the bump in the road, I fully expect them to bounce back and move forward and continue their run towards a Memorial Cup.   Maxime Clermont has regained the confidence of his coaches and has been in goal for the first two games of the Gatineau/Drummondville series.  That's the good news.  The bad news is that they have dropped the first two games to the Sean Couturier led Drummonville team.  That said, Clermont isn't the issue for the Olympiques as they have only supported him with one goal so far in the first two games of the series.

After last night's loss which left them down 0-3 in their playoff series to the Owen Sound, Scott Wedgewood and the Plymouth Whalers might have finally run out of good luck and will need a miracle run to extend their season. 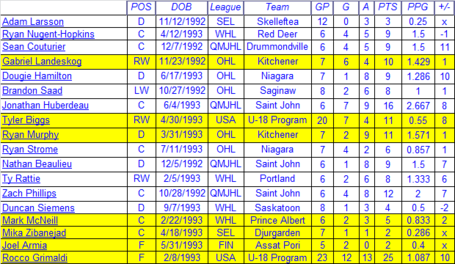 The players shaded in yellow above are those that are no longer active in their league's playoffs.  If you noticed I also added a few players that I thought would be on the Devils radar.  Players added were Nathan Beulieu a defenseman and Zach Philips a center (with a right handed shot) from the Saint John Sea Dogs of the QMJHL and Ty Rattie a right winger from Portland of the WHL.

The Central Scounting Service released their final rankings for the 2011 NHL Draft yesterday.  You can route to the page on NHL.com here.  Here are links directly to the listing of players for the North American Skaters, North American Goalies, European Skaters and European Goalies.

The Devils, by virtue of being the 8th worst team in the league will select either 8th, 9th or 4th in the 2011 NHL Draft.  The draft lottery will be held tomorrow night with the winner being able to jump up four slots from their current position.  Teams can only drop one slot and only the top 5 teams can win the top overall pick.  The odds of the Devils winning the lottery to jump to the 4th slot is 3.6%.  The total odds of dropping to the 9th slot is 7.4% which is the aggregate odds of teams slotted 9-12.   There is an 87.7% chance that the Devils will end up picking in their current slot, so it is likely the status quo is kept.

In anticipation of the lottery tonight here are the rankings of the draft eligible players I believe the Devils should focus on in the draft.  Since the Devils can pick no lower than 9th, I only ranked 9 players.

(All the links above take you to the player's draft profile on NHL.com)

While I always believe you draft the best player available, I also believe that you have to be cognizant of your organizational depth.  The Devils have solid-if not spectacular-depth in the system at the defensive position with Jon Merrill, Alexander Urbom, Eric Gelinas and Brandon Burlon all ready to contribute in the next few years.  Combined with Matt Taormina, Mark Fayne and other veterans at the NHL level I would not head into this draft saying that the Devils needed a defenseman. That said, it seems to me that there are a lot of talented defenseman that should be available (even after Adam Larsson is selected) at the 8th pick and it would be hard for me to pass up on some of them if I was a GM.

My personal list will likely change in the coming weeks/months.  I also suspect that there will be some players who are not talked about much right now that end up going in the top 15 or even top 10 selections of the draft.  The CSS Rankings are far from infallible.  Looking at last year's rankings Jeff Skinner was ranked 37th by CSS. Last I checked he was having a pretty good rookie season.

So do you like my list?   Hate it?  Have one of your own?  Have any other thoughts on the prospects that the Devils currently do have in their system?  Any draft related/prospect topics you want to see written about in the off-season? Thanks for reading and sound off below!