In news released yesterday, Jon Merrill was named to the CCHA All Rookie team.  Ohio State defenseman Curtis Gedig was named as an honorable mention.

The NCAA hockey conference tournaments stared over the weekend.  Corbin McPherson's Colgate team advances to the ECAC quarterfinals to play Union after they beat RPI in a double overtime elimination game on Sunday.  (As an aside, besides the Frozen Four tournament each early playoff series in conference tournaments are typically 3 games from a Friday to a Sunday, with the first team to win 2 games advancing to the next round.  The higher seed has the advantage of having all three games at home)

In the CCHA, Curtis Gedig's Ohio State team fell to Lake Superior State University and there season now has ended.  Michigan, the #1 seed in the CCHA, had a bye this past weekend and will resume their schedule when they play Bowling Green this weekend.

In the WCHA the first round of the playoffs are set.  Wisconsin will play at Colorado College, the Golden Gophers will play host to Alaska-Anchorage and the Fighting Sioux as the #1 seed will most Michigan Tech University.

In a new wrinkle this year the WCHA will have a ‘Final Five' following the first round of the playoffs.

Following the completion of the first round, the six winning teams will advance to the WCHA Final Five at Xcel Energy Center in Saint Paul. The brackets for the Final Five will be pre-set and the top two seeded teams will receive a bye.

It should be interesting to see if Mike Hoeffel can help lead a resurgent Minnesota team on a run to get themselves an invitation -or even better an automatic bid- to the Frozen Four. 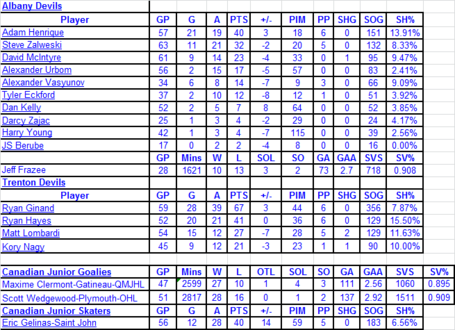 The Trenton Devils currently are still all alone in last place in the Eastern Conference with a 21-33-1-4 record.   is ‘leading’ in the race for last place by 10 points.

It was an 2-2 week for the Albany Devils.  Jeff Frazee return (and his .908 save percentage) has helped keep competitive in their recent games. Adam Henrique scored his 21st goal the other night which puts him in a tie with Nick Palmieri for the most goals by a rookie for a Devils AHL affiliate.  Impressive?  Yes, I say so.  Considering what he has accomplished in a short a period of time I can’t wait to see Henrique at the next level.   Projected over a full 82 game schedule Henrique would produce about 30 goals.

Former Worcester Shark  Steve Zalewski continues to enjoy his return to upstate as he has tallied 7 goals and 4 assists in the 13 games he has played for .

Their current record of 24-34-1-3 places them 12th in the Eastern Conference.  Tyler Eckford (personal) is still out for an indefinite period of time.

Eric Gelinas has sat out the last two Saint John Sea Dogs games due to a charley horse although I would guess that this time off is more precautionary than anything else as the Sea Dogs have a comfortable place in the standings.   On the QMJHL website there is a player profile on Gelinas you can link to here.

Top ranked defenseman Ryan Murphy suffered a concussion the other night and as details present itself I will update you on the severity of it.  As of now, I don't think there is major concern, but this is certainly something that might affect his draft position.

Despite their surge in the points column the Devils are currently in the '6th' spot as far as draft ranking is concerned. So if there is a silver lining to not completing a nearly impossible run to the playoffs is that the Devils still will receive a premium draft pick.