Share All sharing options for: Zach Parise Skates - His Injury, Timetable, and More

The time has finally come. The news has finally come. And it's the best news the Devils organization and Devils Army could have heard. Yesterday, Zach Parise has been cleared to begin light skating. He's been out since October 30th, when he left the game after colliding with another player against the Los Angeles Kings. He's missed 51 games and counting. This injury and story is slowly coming to an end, and we may even see Zach in the Devils uniform a few times this season.

This post will be a more detailed time line of his injury this season, what's to come for Parise, and what exactly his injury was. That and more after the jump.

Parise left the game in Los Angeles and headed back to New Jersey with GM Lou Lamoriello. All were concerned as he fell very awkwardly, and the contact was in the knee area. He was evaluated, and scans shows he had no ligament or  major cartilage damage. A couple days later, Parise was schedule to have arthroscopic surgery in his right knee. During the surgery, it was determined then that he has a torn meniscus; doctors would repair the area during the same surgery. His timetable off the ice - three to four months.

The biggest problem at this time was that Parise told reporters that this injury was not a sudden thing. It was something aggravating him since training camp. John had much more to say on this matter back when the reports came out and had some rough comments for Parise and and the Devils medical staff. I can't say I blame him. If he took the time off during the useless preseason and even some time off to begin the regular season, maybe he doesn't need surgery and maybe he is out for as long as he has been. They didn't, it happened, so no point in going nuts about it.

Parise was placed on Long Term Injured Reserve on November 12th. With Parise and Salvador out long term, the Devils were finally out of the cap space gutter. It was low reward at such a high price. I'm sure most would rather have a healthy Parise with cap problems then a team without Parise with no cap problems.

For some time, he was scheduled to be in a brace. He was spotted a few times at The Rock in the team suite thanks to the MSG TV crew. This was the point where Parise just needed rest. Not a lot to no activity for over a month. Finally, in mid-December, he was free from his leg brace and begin "light mobility" or light rehabilitation.

Around the turn of the new year, some sour news was revealed. The three to four months recovery was a much more optimistic time frame for Parise's return (end of January to end of February). It was recommended that he wait until March until seeing a doctor and getting the nod to begin skating. There were reports all over hockey and sports sites that Parise may miss the rest of the season.

Shortly after that, Tom Gulitti reported Parise wanted to remain a New Jersey "ideally" which debunked some silly reports coming out of the NY Post, Boston Globe, or Canadian presses.

So the organization waited, the fans waited, Parise waited and rehabbed. Finally March 2nd came, and he was given the green light to start light skating. Lou had this to say on his timetable to start practicing with the team:

"How long will that take? I say two to three weeks minimum so I don’t have to answer questions for three weeks because it could be more and I don’t know. It’s not going to be less. That I can assure you. It can’t be less just simply because of how long it takes to get certain measurements in your legs where they should be."

Gulitti added this in the same link:

Parise actually has to build up strength in both of his legs because he hasn’t used either to skate for four months. Lamoriello said Parise will continue to do physical therapy on his knee as well to help build strength.

Teammates were told about Parise return, and obviously they were excited to see a player like Parise on the cusp of returning.

Today, Parise skated at Prudential Center for about an hour and spoke to the media. Parise had this to say on returning this season:

"I think it’s definitely too early to tell," he said. "But, at the same time, the goal is the same. We’re just trying to safely and comfortably get back, get back to getting used to skating and if after how ever many weeks I feel I can do that and I can play, then I’ll play. If I don’t think I can, then I’m not going to. It’s as simple as that.

"Regardless of the situation, as far as the team and where we are, if I’m comfortable and I think I can play, then I’m going to try to play. If not, then I’m not going to risk it."

The only restrictions he has is just on the ice. His physical rehab has no limits, which is a great thing to hear.

So if you are asking, "what the hell is a torn meniscus in the knee?" Well, you're in luck. No I'm not a doctor or a med student. But I did find a informative page on the matter:

Here's a photo of the knee provided by the site: 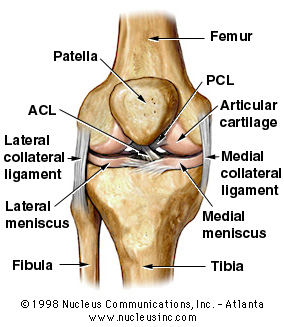 Here's the treatment that Parise most likely went through during surgery:

The arthrotomy method of doing surgery has been gradually replaced by a procedure known as arthroscopy. This is still a surgical procedure, but with several differences. Arthroscopy involves inserting a fiberoptic telescope that is about the size of a pencil into the joint through an incision that is approximately 1/8 inch long. Fluid is then inserted into the joint to distend the joint and to allow for the visualization of the structures within that joint. Then, using miniature instruments which may be as small as 1/10 of an inch, the structures are examined and the surgery is performed.

Now, obviously we don't know every bit of detail Parise had or went under, but this is a quite fascinating technique he went under. I bet these doctors are awesome at Operation.

Parise's rehab was tough and intense as times. He explained to Gulliti some of the things he was doing and doing now.

So his time line now is two to three weeks at a minimum for the next step, which is practicing with the team. It could be longer depending on how he feels physically, condition wise, and mentally. He's probably has to get over that hump of "Oh man, I hope I don't do anything to my knee if I do this." He's not a physical player, but he does get into the physical areas (boards and around the net) that make him so good. That may take some time.

If and when he does return to practice. Who knows until he is in "Lemaire shape." It will most likely be another two to three weeks. He may even get a conditional stint in Albany just to get some game time under him. He's been off the ice and hasn't played in a game in over four months. Honestly, his chances returning for the regular season are slim. Six weeks from today is April 14th, four days after the last game of the season.

So let's be glad Parise is back and getting healthy. We would all want him to return this season and help the Devils continue this magical run. But his health and mind are more important for him (and the Devils) long term. There's need to rush him for a run that may fall short. If the Devils do do the unthinkable, and somehow make the top 8, then we may see a healthy, rested Parise for the playoffs....and wow, everyone better watch out.