In a season review one Wisconsin Badger reporter thinks Faust will have more of an impact next year than he had this year.

Coach Red Berensen had some nice things to say and an even better player comparison to offer when asked about Jon Merrill recently:

Merrill "just does the right thing with the puck, he's in good position, he's really a smart, smart player," Berenson said. "He knows how to play the game, and that's so special. It's hard to teach him a lot. He's just going to get better every year."

Highlights of the Michigan-Nebraska Omaha game from Friday are here.  Highlights from Saturday's win can be viewed here.  (Merrill is #24)  Michigan advances to the Frozen Four next week in St. Paul vs. the University of North Dakota.

With Brandon Burlon out again due to a illness Merrill was forced to step his game up for the Wolverines and did so in surprising ways.  While I can't find a link to the video anywhere here is a description of the game saving play Merrill made in overtime vs University of Nebraska-Omaha:

After a scoreless third period, the teams headed to overtime. Michigan took an early penalty, during which Merrill saved a potential game-winning goal by UNO after Hunwick was out of position from making an initial save. Merrill slid in front of the net and swatted away a shot, and then he made a kick save on a second attempt to hold the stalemate. 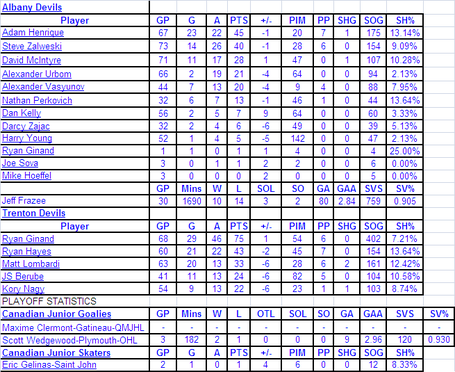 Albany's current record is 30-37-1-4 and places them 13th in the AHL Eastern Conference.

Tyler Eckford (personal) is still out for an indefinite period of time.

The Trenton Devils currently are still all alone in last place in the Eastern Conference with a 25-36-2-6 record.   is ‘leading’ in the race for last place by 9 points.  Shot machine Ryan Ginand was called up to Albany over the past weekend and tallied a goal and 4 shots in his AHL debut.

In the 'Q' Maxime Clermont has not played in Gatineau's first two playoff games and I would suspect unless there is an injury he won't see action again this year.  Eric Gelinas and Saint John are rolling in the first round of their playoffs series jumping out to a 2-0 series lead over the Cape Breton Eagles.

Scott Wedgewood has the Plymouth Whalers leading the high scoring Kitchener Rangers 2 games to 1 in the opening round of the OHL playoffs.  Wedgewood is trying to steal this series for Plymouth as Kitchener is averaging 43 shots per game.

A new addition to the list above is Mika Zibanejad, a 17 year old center out of Sweden.  Currently playing in the Swedish Elite League there are good profiles of him by Mike Morreale of NHL.com here and a interview with SBN site Copper & Blue here.  With two more years of commitment to Djurgarden, picking Zibanejad might be right up Lou Lamoriello's alley.   Djurgarden is currently in the playoffs and Zibanejad has a goal and assist in 7 games played.

Next week, I will update the prospect stats only with playoff information as all of the teams above are currently playing in their respective league's playoffs.

Thanks for reading and sound off below.