The Devils' NCAA prospects should have the nickname ‘Skating Wounded' right now.  With David Wohlberg (collarbone) already done for the season Brandon Burlon and Derek Rodwell both sat out their conference tournament games last week due to injuries.  Burlon because of illness and Rodwell because of an undisclosed injury suffered in the first game of the WCHA tournament on March 11th.

Corbin McPherson and Colgate lost in the semifinals of the ECAC Tournament on Friday to Yale, 5-0.  After a disappointing regular season Colgate put together back to back series wins against Union and RPI (two teams who made it to the NCAA tournament) to head into next season on somewhat of a positive note.

Assuming Burlon comes back for this weekends start of the Frozen Four tournament he and Jon Merrill will be the only active Devils prospects still playing for their college teams. 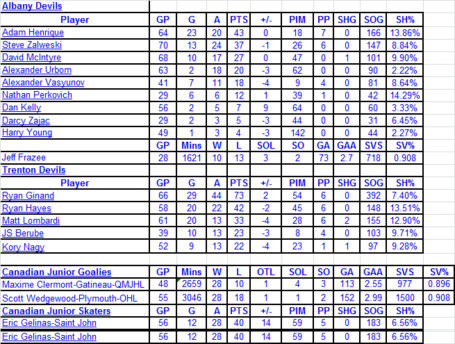 The big news out of Albany has been the addition (via amateur try out) of 2007 2nd round pick Mike Hoeffel and unrestricted free agent Joe Sova (more thoughts and comments about that here). Both players will have their entry level contracts begin in the 2011-2012 season and attend training camp next September.  Contract details for Hoeffel can be found via Capgeek.com here.  Sova's can be found here.

Jeff Frazee has been injured, again. This time he has been out due to a hand injury sustained during warmups on 3//11.  Dave Caruso and Mike McKenna have split the goaltending duties in Frazee's absence.  Their current record of 30-35-1-3 places them 12th in the Eastern Conference. It will take some doing for Albany to hit .500, but with some new blood in Sova/Hoeffel maybe they can hit that target.

Tyler Eckford (personal) is still out for an indefinite period of time.

The Trenton Devils currently are still all alone in last place in the Eastern Conference with a 24-35-2-6 record.   is ‘leading’ in the race for last place by 9 points.

In the Q, Maxime Clermont finally returned to the net after sitting out since March 5th and his first start since March 4th.   The start in net could have been a result of the fact that it was likely Clermont's last regular season home game in the Q as Francois Lacerte will start the Olympiques playoff series on Friday.

Scott Wedgewood will open the OHL playoffs on Friday for his Plymouth Whalers (6th seed) against the high scoring Kitchener Rangers (3rd seed) who have top 2011 draft prospects Gabriel Landeskog and Ryan Murphy.  They also have top prospect Jerry D'Amigo. If the Whalers are to win this series, they will likely need some epic Wedgewood performances (like Game 4 of the Windsor series from last year) to advance

Most prospects season are heading towards the playoffs.  After this week I will continue updating the numbers above with playoff statistics as they happen.  Based upon the strength of their teams I would expect Huberdeau (Saint Johns) Murphy, and Landeskog (Kitchener) to play deep into their respective playoff seasons.

Thanks for reading and sound off below with any questions or comments.