Share All sharing options for: The Continued Struggle of the New Jersey Devils Drawing Penalty Calls

The New Jersey Devils have struggled to score goals and their power play has been poor all season long. Their conversion rate is currently at 15.2%, the fifth worst success rate in the NHL.  They have only scored 25 goals at 5-on-4 situations, the second worst total in the NHL according to Behind the Net.   5-on-3 situations haven't fared much better, with only 7 goals scored as per Behind the Net.   Incidentally, 4-on-3 play has yielded the most relative success as only one team has scored more than New Jersey's 4 goals scored in those situations: Tampa Bay.  Still, the Devils do not convert on a vast majority of their power plays, undercutting an offense that has suffered a miserable shooting percentage this season.

What makes the problem worse for the power play is that the Devils just don't get so many of them, relative to the rest of the league.   The Devils are dead last in the league in power play opportunities with 210. Their position is not even close; they are currently 20 opportunities behind the second-to-last team, Ottawa.  This is as much of a problem as the lack of goals. Without so many opportunities, this means the Devils do not enjoy the general benefit of attempting to attack for most of the two minutes available.

This is not a new issue.  The Devils have struggled to draw calls throughout the last three seasons.  Last season was the only one where the Devils had a higher drawn-to-taken ratio, but even then it's not by much. With the season winding down and the power play performance a seemingly perpetual point of peeving people who are passionate about the Devils, I figured now is a good time to see how the Devils are doing at drawing calls player by player. Who is getting most of the calls at even strength? Who's taking the most calls at evens?

Those questions will be answered after the jump.  One thing is clear: the Devils really miss Zach Parise in terms of drawing penalties.

A Quick Word About Drawing Calls

Usually, "drawing a call" or some variation thereof is used player who may sell an infraction (e.g. a hook, a trip, a slash, a high-stick etc.).  Officially, it just means the player was subject to an infraction.  So in last night's 3-0 loss to the Capitals, Brian Rolston was tripped by Karl Alzner and Rod Pelley got hit in the face by Matt Hendrick's face.  According to the game's official play by play, Kovalchuk and Pelley were credited for drawing the call.  Neither sold what happened to them, it just happened.  For this post (and in the future), saying a player drew a call doesn't mean embellishment.

I took the following numbers from Behind the Net and calculated the drawn/taken ratio and percent of calls drawn for this season.

There are two caveats here.  The first is that the total number of games played: Behind the Net, as of this writing, has the Devils at 70 and not 71.  Since this is during the season, that's not going to mean a whole lot. Just add 1 to Rolston's and Pelley's drawn count.  The second is based on how Behind the Net is organized.  The players listed under New Jersey are those who are currently with the Devils.  Jamie Langenbrunner and Jason Arnott aren't on the team so their numbers aren't included. David Steckel is, even though most of his numbers came when he was a Capital.  I couldn't figure out a way to parse their numbers here, so the total team numbers may be off by a little bit (they may be better without Arnott and Langenbrunner). If anyone has a way to figure that out, I'd be happy to remake the charts and revise my own conclusions if necessary.

For this season, my criteria was simple: a minimum TOI/60 of 1.  This resulted in nearly every Devil who played in this season outside of Arnott and Langenbrunner.   Here's the source of the numbers, and now the chart in all of it's flawed glory: 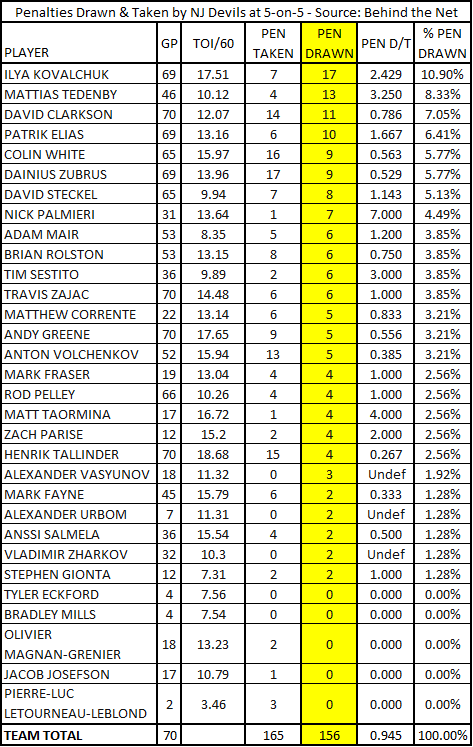 A few points from the chart:

At the end of last season, I wanted to see the Devils improve in this regard.  While there's 10 games left to play this season, they really didn't.  Among the many what-ifs surrounding Parise's health, this is one of them.  Maybe they would have improved on last season with him (and get more goals, more wins, etc.).  Still, even with a healthy Parise, the Devils really could stand to improve in drawing calls in future seasons.  Tedenby may turn into a player who can do that, but they might need more than just him in the future.

How does a team draw calls? In my opinion, it comes from offensive pressure.  Forcing the opposition to put a hook in or get a stick in between legs is usually going to happen if they're caught out of position, if they're about to be beaten, or if they're just lazy.   By forcing the issue offensively, the opposition will be in that spot.

Then again, the Devils have done very well at evens in making the most of their possession this season. They have been forcing the issue offensively and they are still so low in getting PP opportunities.  Perhaps something else is needed. Maybe they really need a pest of sorts?  Maybe the Devils need to force more physical situations?  What do you think the Devils need to do to draw more calls?  Please leave your answers and other thoughts about this issue in the comments.   As far as the power play itself goes, well, that's a discussion for another day.  For now, let's talk about how the Devils can get the calls that lead to those power plays. Thanks for reading.