Also, it is being rumored by a bunch of folks with ties to Minnesota University that Mike Hoeffel has signed with the Devils and is on his way to Albany.  I will update this post as more information becomes available.

Michigan advances in the CCHA tournament with two wins over Bowling Green.  Jon Merrill and David Wohlberg were on the scoresheet on Friday. Unfortunately  Wohlberg has likely played his last game this season.  Accoring to the MGOBlog he was hit by two players which caused an injury. Other online resources have mentioned he has a broker collarbone.  In other Michigan news, Jon Merril was nominated for three awards this past week. CCHA Rookie of the Year, Top Offensive-Defenseman and Top Defensive-Defenseman.  (Thanks to CJRichey for putting up this fanshot the other day when it happened)

Derek Rodwell's North Dakota team advances to the WCHA Final Five this weekend.   After playing Friday, Rodwell was a scratch on Saturday.  I will provide more information as it becomes available.

Minnesota's season came to an end on Saturday.  Swept by the Anchorage-Alaska Seawolves, Minnesota is unlikely to play in the Frozen Four tournament this year.  This ends the season for Seth Hegleson and the career of Mike Hoeffel  (more about Hoeffel was written by me here yesterday)

Joe Faust added his first goal of the season on Friday night, but unfortunately that will be his only season after Wisconsin was eliminated from the WCHA playoffs.

Corbin McPherson and Colgate went to play top seeded Union in the ECAC tournament.  After upsetting RPI last week, Colgate did the unthinkable and went to Union and won.  That is two series wins and a trip to Atlantic City for ECAC semifinals where they will play Yale on Friday. 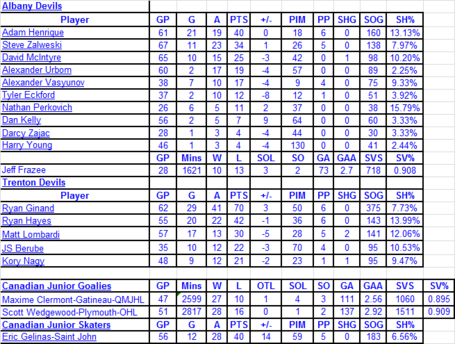 The Trenton Devils currently are still all alone in last place in the Eastern Conference with a 23-33-2-5 record.   is ‘leading’ in the race for last place by 10 points.

A four game winning streak for Albany?  Yes, that's correct.  Albany won 4 contests in 5 nights over the past week.  The most impressive win was the first.  Down 4-1 against Bridgeport with 9:35 left, Chad Wiseman scored 4 goals to single handedly lead the team to victory by a score of 5-4.  Their current record of 28-34-1-3 places them 12th in the Eastern Conference.  Tyler Eckford (personal) is still out for an indefinite period of time.

After sitting out last weekend, Eric Gelinas played in all the recent Sea Dog games and added 2 assists and 7 shots to his season total.  He was a plus 1 in the three games.

Besides a relief stint on the 11th Maxime Clermont has played sparingly for the Gatineau Olympiques.  I am not sure if he is simply being rested after a heavy early season workload or if he has lost the confidence of coaches after some recent struggles.

In two losses this week Scott Wedgewood faced 70 shots (saving 63) as Plymouth stumbles into the OHL playoffs.  Wedgewood only took one of the losses as he replaced starter Matt Mahalak early in the first period of a loss against Erie.

Despite the wins, they Devils aren't improving their place in the overall league standings much.  If they were to stay in their current position the Devils would pick as low as 7th overall (if a team behind them won the lottery) and as high as 2nd if they won the lottery.  So if they don't make the playoffs I hope they stick around this spot.  (But I am part of the #webelieve movement)

Jonathan Huberdeau hit the 100 point mark for Saint Johns, while Sean Couturier continues to search towards that mark despite missing time to play for Canada in the World Junior Championships.  Ryan Murphy still has not played since suffering a concussion last week.