Zdeno Chara's hit on Pacioretty vs Anton Volchenkov's hit on Boychuk: which one was worse?

Share All sharing options for: Zdeno Chara's hit on Pacioretty vs Anton Volchenkov's hit on Boychuk: which one was worse?

On Tuesday night, most of us were drinking sulking over the loss against the Senators because of the implications of the Devils playoff run, and missing out on an easy two points which would've brought the Devils 6 points back of the Sabres for 8th place instead of 8 points back. While that was happening, a brutal play occured in the Bruins-Habs game, where Canadien's forward Max Pacioretty suffered a concussion and a pair of fractured vertebrae thanks to a completely reckless play by Zdeno Chara. The NHL, with a chance to show that they actually have a spine, instead decided not to punish Chara in any way, shape or form. Some were fine with the ruling, like Puck Daddy's Greg Wyshynski. SBNation's Canadiens' Blog Habs Eyes on the Prize wasn't all too pleased with the decision (in less than 140 characters too!). So what exactly does this have to do with the Devils? Remember Anton Volchenkov's 3 game suspension for his hit on Zach Boychuk? That hit wasn't half as bad as the hit on Pacioretty, yet Volchenkov was punished, and punished heavily with a 3 game suspension. Which makes me wonder... how exactly was Volchenkov's hit worse?

First off, here's video of the hit on Pacioretty by Chara.

And Here's the video of Volchenkov's hit, for those who didn't remember.

I did a video review of Volchenkov's hit when it happened, and I concluded that the hit was suspension worthy because of where Volchenkov hit Zach Boychuk- the head. Luckily, Boychuk didn't seem to miss any time as he played in the game after the hit, and was assigned to Charlotte a few days later.

In Chara's case, Pacioretty knew Chara was there. Pacioretty just lost control of the puck before Chara got there. He wasn't expecting Chara to shove him into the stantion while he was trying to get past him. The refs gave Chara a 5 minute major for Interference and a game misconduct for the hit. Both plays were reckless- Volchenkov elbowed an unsuspecting player, while Chara rammed a player skating at full speed into a metal bar at least two seconds after he lost the puck. However, like I said in my video review of the play, Boychuk was also to blame there. If he kept his head up he might have been able to get out of the way of Volchenkov. Chara had to know that the stanchion was there, and he was probably expecting to dump Pacioretty into the Habs' bench. Unfortunately, Chara miscalculated and his force going forward ended up pushing Pacioretty into the stantion and BOOM. Broken neck.

The timing of each play was also a factor. Volchenkov's hit happened in the second period of a scoreless period. Only motive Volchenkov would've had is well... just hitting someone. The Habs were up 4-0 against the Bruins. The Bruins would've been frustrated with the way they've played. Who remembers LeBlond jumping Marcus Johansson in the 3rd period of the Caps 7-2 victory against the Devils in October? Same logic applies here. Chara's actions could've been out of frustration as well.

However, there are other factors that had to be considered as well. Intent happens to be one. From Volchenkov's hit, there was some intent on the hit. Volchenkov did raise his elbow to hit Boychuk. However, there wasn't anything else to the hit. Volchenkov and Boychuk never had any problem with each other prior to that hit. Pacioretty and Chara on the other hand, have previously had some run ins. James O'Brien at pro hockey talk mentioned that Pacioretty bumped Chara after an overtime goal, and Chara took exception to it. Maybe Chara wanted to get back at Pacioretty for that? The Habs and Bruins also aren't two teams that get along- evidenced by their previous fight filled game.

In each case, both players were first time offenders and have not recieved supplemental discipline. Volchenkov doesn't have a reputation as a goon or a dirty player. He's also not known for puglisim, he's had two fights in his NHL career, and his last fight in the NHL was 2006-07 against the Sabres Adam Mair. Chara on the other hand has been suspended by the NHL (for an instigator penalty), but is considered a first time offender because the suspension was an automatic one given to him because of the instigator penalty. The 'Eh' factor did some research on Chara, and he's found out that Chara isn't exactly the cleanest of players, as he's been able to get away with going after Paul Gaustad in a scrum, as well as a pair of hits from behind on Mikhail Grabovski.

However, here's where the comparison gets really messy (and stupid).

Here's what the NHL had to say about each incident. Here's Colin Campbell on Volchenkov's suspension.

While he has not been involved in a supplemental discipline incident previously and it is fortunate that his opponent returned to play in the game, Volchenkov delivered an illegal blow to the head

And here's Mike Murphy on the Chara incident:

After a thorough review of the video I can find no basis to impose supplemental discipline. This hit resulted from a play that evolved and then happened very quickly -- with both players skating in the same direction and with Chara attempting to angle his opponent into the boards. I could not find any evidence to suggest that, beyond this being a correct call for interference, that Chara targeted the head of his opponent, left his feet or delivered the check in any other manner that could be deemed to be dangerous.

"This was a hockey play that resulted in an injury because of the player colliding with the stanchion and then the ice surface. In reviewing this play, I also took into consideration that Chara has not been involved in a supplemental discipline incident during his 13-year NHL career

Comparing these two statements, the NHL looks stupid. One guy gets suspended three games for a hit where the victim was able to play afterwards, while another guy gets zero games for breaking another man's neck. What the NHL is implying is that it's not okay to deliver a shot to the head, while it's completely legal to cripple someone as long as you don't hit them in the head. So according to NHL rules, I could essentially get away with crippling someone, just as long as I don't hit him in the head. Chara's hit was acceptable according to the rules because he didn't target Pacioretty's head or he didn't leave his feet. The latter argument is hilarious, because Chara's the tallest player in the league, and he wouldn't have any reason to leave his feet to hit someone. Also, the NHL seems unaware that you can injure people without hitting them in the head. As for their label of dangerous... that hit was dangerous. I don't see how it wasn't dangerous.

The NHL mentioned in their statements that the play was considered a "hockey play". In a sense, it's true because interference is a "hockey play". However, that's the only part of the whole incident that's a hockey play. Bruce Arthur at the National Post felt that as someone who's played over 900 games in the NHL, Chara should've at least known where the stantion was. The hockey play excuse could be used in the case of David Steckel's hit on Sidney Crosby, as Steckel didn't know Crosby was there, and was more focused on the puck than Crosby, who was slowly coasting when he got hit, and didn't notice Steckel until it was too late. Chara knew Pacioretty was there, yet he rammed him into the boards anyways. Pacioretty knew Chara was there, he just wasn't expecting Chara to run him into the boards trying to cripple him As for Chara's claims that he had no idea he was hitting Pacioretty, that's laughable because clearly Chara had to know he was hitting Pacioretty.

What annoys me about this whole mess is that the NHL seems more interested in stopping headshots than dangerous plays. Boychuk was able to skate again and hasn't suffered any ill effects from a hit deemed illegal by the league. Pacioretty's not going to be playing any hockey soon, or in at least a year. Not only does he have two fractured vertebrae, he's got a grade 3 concussion to go with it. Yet the hit was "clean" according to the league, because Chara didn't leave his feet or hit him in his head. I'm not saying that Volchenkov didn't deserve to be suspended because Boychuk wasn't hurt. I just fail to see exactly how Volchenkov's actions were that much worse than Chara's.

The worst part is the fallout. If the NHL had suspended Chara, this discussion wouldn't exist. Joe Thornton got two games for a blindside hit on David Perron. Perron hasn't played since the injury, yet the backlash wasn't nearly as bad as it was for Chara's hit because Thornton got suspended. People in Montreal are filing charges against Chara because the NHL failed to acknowledge his actions. If he got his suspension, this madness wouldn't be occuring. Maybe not at these levels, but at least people would've felt justice was served, instead of trying to perform their own vigilante justice due to incompetence in the front office. Now they've got a PR crisis on their hands, and this isn't just going to blow away.

The NHL had a chance to set a precedent here, that reckless play does not belong in this league. Instead, they proved that they're more interested in punishing stuff they don't approve of and not caring for the well being of their players. Chara severely injured someone by being reckless and got no punishment whatsoever for his actions because he didn't break any rules. Good job NHL. 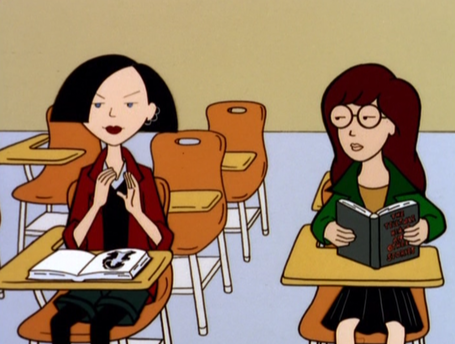 (I knew this picture would come in handy).

What do you guys think about all the stupidity over this? You might not feel the same way I do about this, but Was Anton Volchenkov's hit on Zach Boychuk really that much worse than Chara's hit on Pacioretty?