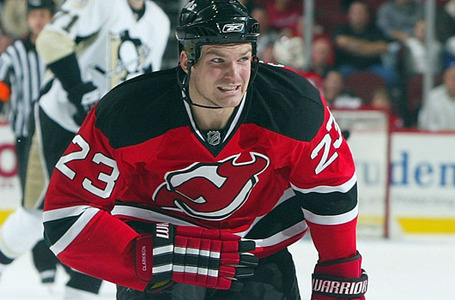 Not sure about some you, but after the trade I thought to myself: "There's no way Steckel can keep up or help out with Tedenby's development and Tedenby's defesinve shortcoming are just going to create a line with no identity or benefit if the two are put playing with one another. They probably should just move Clarkson up with Steckel if the plan is for him to truly center the 3rd line alongside Zharkov. At least that way at least you have two defensively responsible players and a hulking bruiser with some scoring ability.

That to me describes a classic NJ Devils checking line. Defensively sound. Punishing and will pinch in when you need them too if the opportunity arises.

The 3rd line of Arnott and whoever was on his wings since January hasn't really done much of anything of note. It's been a mess when they've stepped on the ice. And the best I usually hoped for was that they wouldn't give up a goal, and they weren't really generating too many scoring opportunities unless Kovalchuk was being double-shifted which I don't think is smart to do game after game after game.

Needless to say I was pretty pleased to read over on Gulitti's site that Steckel was indeed centering Zharkov and Clarkson at the first practice. Will it stick? Who knows.. but of the bottom six forwards that pairing makes the most sense and I hope they get a few in-game shifts to gel and do their thing. I don't see them scoring much, but then again the 3rd line wasn't scoring much to begin with... But at least they have the skills to wear down the opposition which will make it easier for the top 6 to do what they should be doing (scoring) and spell some relief for Rolston/Elias/Zubrus who have basically been playing the dual role of the team's second scoring line and best checking forwards.

Move Tedenby to the 4th as a shot of energy when the needs it and keep giving him some time on the Power Play. But he wasn't really doing much of anything or getting anything out of his limited time on what was a patchwork 3rd line.