Jon Merril is second among CCHA defenseman in both goals scored and total points.  Joe Faust got into the lineup on Saturday night for Wisconsin and finally delivered his first point (assist) on the season.  Faust joined the lineup due to an injury suffered by junior Eric Springer.  Even more impressive was Faust being a +2 in a 7-3 Wisconsin loss to St. Cloud State.  Freshman Curtis Gedig was injured in the first period of Ohio State's loss to Ferris State and did not return to the game.

It's tournament time for college hockey!  Ohio State will next play in the first round of the CCHA tournament against Lake Superior State this weekend.  The series is best out of three.   Michigan as a #1 seed in the CCHA will receive a first round bye.

The WCHA is still playing out the remainder of it's schedule but Derek Rodwell and North Dakota have already clinced home ice as the likely #1 seed for the first round of their playoffs.   12th seeded Colgate will play at 5th ranked RPI this weekend in the ECAC playoffs. 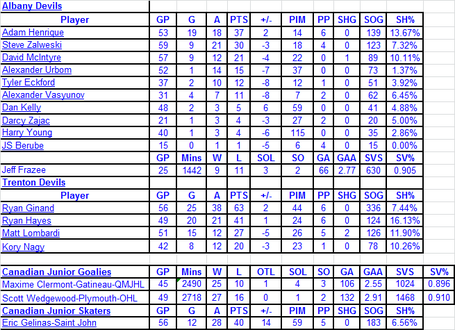 The Trenton Devils currently are still all alone in last place in the Eastern Conference with a 21-31-1-4 record.   The goaltending issues at the AHL and NHL level haven't helped Trenton as they have had to sign a few journeymen goaltenders as Jeff Lerg and Dave Caruso have spent time at Albany.

It was an 0-3 week for the Albany Devils.  Jeff Frazee has returned from his knee injury and played two periods the other night as he works himself back into game shape.  The only bright spot for Albany continues to be Adam Henrique who  now leads the team with 19 goals.   Their current record of 22-32-1-3 still places them 14th in the Eastern Conference.  Tyler Eckford (personal) is still out for indefinite periods of time.

Maxime Clermont came up small this past weekend being pulled after allowing 2 goals on 8 shots in the first period vs. the Saint John Sea Dogs.  Scott Wedgewood has led Plymouth to it's 20th straight postseason.  The OHL playoffs begin 3/24.

Both Gabriel Landeskog and Adam Larsson are back playing after battling ankle and groin injuries respectively.  Sean Couturier continues to pule on the points, but Ryan Strome hasn"t been a slouch either.

Despite their recent surge the Devils are still the 4th worst team in the league.  They are likely to pass the AHL Panthers and the Avalanche shortly and considering Atlanta's struggles I would at least expect the Devils to pass them as well. I would guess the Devils are to end up in the 7-9 range for the 2011 draft.  This is a good thing.  In a draft where people think there are a number of players who could end up being the best overall player picking a little bit lower is not necessarily a bad thing.