With the recent news that Anton Volchenkov might face discipline for his elbow on Zach Boychuk last night, I thought it might be a good idea to take a look at this hit with video. This isn't the first time I've done this, as I took a look at Jason Arnott's power play goal using video review in November. Except this time I'm going to use frame by frame analysis to determine whether or not Anton Volchenkov is guilty or innocent (and, to see if I can do a better job than Colin Campbell).

Update: Volchenkov gets a 3 game suspension for the hit. Feel free to use the comment section of this post to discuss the suspension.

First off: the video of the hit (via Puck Daddy's Three Stars Post)

The most important part about the video is the angle of it. In the comment section of his recap, John mentioned that a lot of the fans were surprised at the call on the ice. From their angle maybe they weren't able to get a good look at the hit. But the replay does give us an excellent angle on the hit.

Now, for the frame-by-frame analysis starting from 0:25 in the video 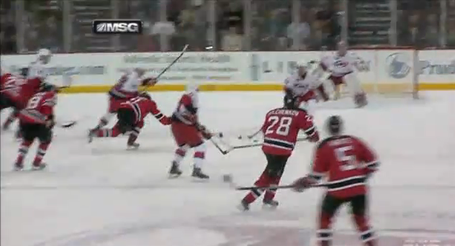 This angle provides an excellent view of the hit and how it develops. Boychuk (#11 in white) is the Hurricane closest to Volchenkov, and the puck is basically where the tip of Colin White's stick is (not exactly there, but you can see it). Also, note that Boychuk's got his head up here.

The next two frames of the puck and Boychuk are not going to be shown, as White obstructs the view of Boychuk, the puck and partially, Volchenkov, who are the subjects of this play. 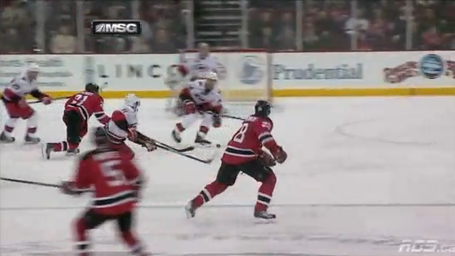 Onto the Second Frame- The hit is starting to develop. The puck might look far away right now, closer to the Hurricanes' defenseman (Jay Harrison) and Mattias Tedenby than to Boychuk, but Boychuk is actually the one closest to the puck. Volchenkov is coming up the ice to try and keep the puck in the Canes' zone. Colin White decides to stay back on this play, which is good move on his part. Also, remember how I mentioned Boychuk keeping his head up? He's too busy going after the puck. Next frame: 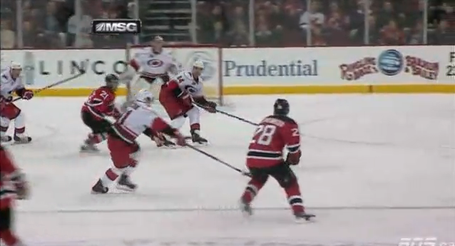 This is where the hit starts to materialize. Remember how I mentioned that the puck looked closer to Harrison (#44 in White) and Tedenby? The puck's right on Boychuk's stick. Volchenkov is skating up the ice to hit Boychuk and try and create a turnover in the Hurricanes' zone and keep the puck in their zone. 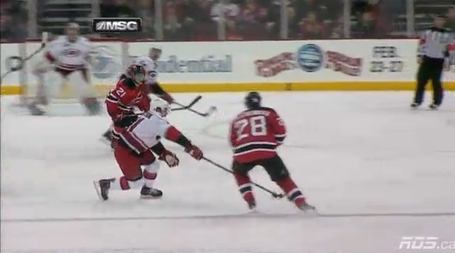 As you can see, the elbow is coming up. Boychuk doesn't really have control of the puck yet, but if he can get both hands on the stick he could get it past Android. As for Volchenkov, he's past the blue line and closing in on Boychuk. Can Boychuk control the puck and get around the hulking defenseman? 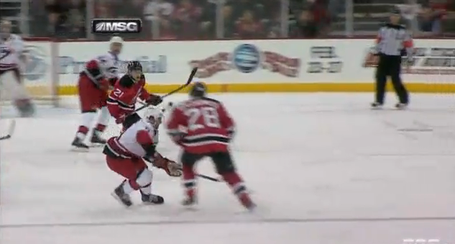 Now, finally, here comes the hit. Boychuk's got both hands on his stick and is ready to play the puck. However, there's one problem with Boychuk at the moment. Remember my comment on the first frame about how Boychuk's got his head up? Yeah, he's got his head down looking at the puck, and he's not paying attention to the fact that he's about to get run over by a speeding Russian. Also, note the position of Volchenkov's elbow; it looks like he extended it. 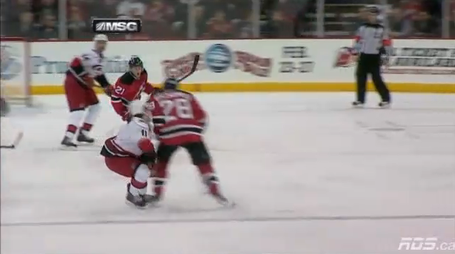 As you can see, Boychuk's basically half way down like he was in the previous frame, and you can see Volchenkov's elbow. Also note that Boychuk wasn't in control of the puck, meaning Volchenkov couldn't have been tagged for interference on that play (if he didn't hit Boychuk with his elbow). As we all know, Volchenkov was given a 2 minute minor for elbowing after the play was called dead. Now, to look at both sides of the coin, for both Volchenkov and for Boychuk.

Why Volchenkov won't get suspended: Boychuk's head was down. Looking at the screenshots, Boychuk's focus was on the puck and not his surroundings. If he had his head up he might have been able to see Volchenkov coming earlier and tried to avoid the hit. Boychuk put himself in a bad position, and he ended up being the victim of a bad hit. Also, Volchenkov's a first time offender meaning they might be more lenient towards him.

Why Volchenkov will get suspended: It's a hit to the head. The NHL's trying to crack down on those, remember? From the replay, you can see some extension of the elbow from Volchenkov. Additionally, the hit was performed when Boychuk was in a "vulnerable" position with his head down, and Campbell and co. could use that against Volchenkov and say that his actions were reckless. A headshot's a head shot, and they're trying to get rid of those to prevent concussions. Even if it means punishing first-time offenders instead of repeat offenders and gutless pukes (coughMATTCOOKEcough).

Conclusions: First off, this isn't a blindside hit, and the main cause of this hit is Boychuk not keeping his head up. If he did he might have avoided Volchenkov's elbow and Volchenkov himself. However, it is pretty clear that Volchenkov did extend his elbow. The deciding factor will be the placement of the hit (the head). Because of that, Volchenkov will probably get suspended for his actions. I also hope Zach Boychuk has a speedy recovery as well.