Once again it is time to see how things are going with the Devils prospects. After the jump you will find statistical updates on Devils prospects from the NCAA, Albany, Trenton and some of the top 2011 Draft Prospects.

It was a slow week in the NCAA for the Devils prospects.  Aside from Mike Hoeffel's goal and assist and Seth Helgeson's assist no other Devils prospect tallied any points.  Corbin McPherson slipped to -11 as Colgate continued to struggle this season as they are 4-22-2.   Michigan was swept this past weekend by Miami of Ohio and has dropped three in a row with all three Devils prospects failing to register a point.   Derek Rodwell (no games scheduled) and Joe Faust (scratched, possible shoulder issue) did not play this weekend. 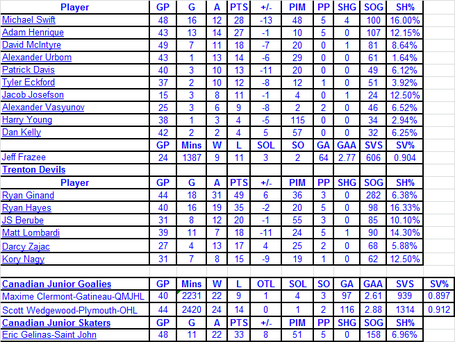 The losses continue to pile up for Albany.  After a 5-3 loss to Hershey the Devils were shut out by identical 4-0 scores against Manchester and Wilkes-Barre respectively.  Their current record of 18-28-0-3 places them 14th in the Eastern Conference.  Both Jeff Frazee (knee surgery) and Tyler Eckford (personal) are still out for indefinite periods of time.  I think any playoff hopes have quickly faded away.   With Frazee's injury and Mike McKenna's impending call up to New Jersey, the Albany Devils signed Trenton goalie Jeff Lerg (a standout for Michigan State a few years ago) to a contract.

The Trenton Devils of the ECHL currently are still all alone in last place in the Eastern Conference with a 16-25-1-3 record.  One of the few bright spots continues to be Ryan Hayes, an undrafted free agent out of the OHL.  After going undrafted in 2007 (even though he was slated to be a 5th/6th round pick via the CSS Rankings of that year) Hayes left Boston College in 2008 after playing only 6 games for the Eagles. While never posting eye popping numbers in Juniors, he was able to put the puck in the net on a regular basis.  From what I have read about him, he seems to have less than average speed which is a problem considering he doesn't offer much size.  He is only 5'8/180.   Hayes, however is someone to root for as he won last year's OHL Humanitarian Award and reading about his efforts in the community gives you a sense about the character the young man has.

In the OHL Scott Wedgewood has stuggled a bit recently but his porous defense (36.7 shots against in January) certainly hasn't helped.  His workload may also be part of the problem.   He has already played 2.5 times as much as he did last year, so I would expect backup Matt Mahalak (draft eligible this year) to get some starts down the stretch.

In the Q, Eric Gelinas is certainly enjoying his time with the Saint John's SeaDogs.  A strong contender for the Memorial Cup, St. John's potent offense has allowed Gelinas to concentrate on offense a bit more and he has posted 2g-7a in 13 games.  He is a plus 18 since joining the SeaDogs.

Maxime Clermont is another goaltender who has hit a rough patch.  Pulled in 2 of his last 3 starts, Clermont is quickly forcing the Gatineau coaching staff to look at a goalie rotation going forward.

Finally, the top 10 prospects for the 2011 draft are listed above.  As the Devils climb the standing I will expand the list to 15 (and of course if there is anyone that you think I should add, feel free to mention it in the comments).  Adam Larsson is still out with a groin injury in the SEL.  Gabriel Landeskog playing for Kitchener in the OHL has just returned from an ankle injury that kept him out of the World Junior Championships.  My favorite stat from the table above is Jonathan Huberdeau's +47.  Almost a 'plus' per game.  Kevin Sellathamby favorite Ryan Strome continues to impress and pile up the points for Niagara of the OHL with 82 points so far on the season.