After a few weeks out of the points column the Michigan trio of Devils prospects all contributed to Michigan's wins over the weekend.  David Wohlberg scored his 12th goal, which is good for second on the Wolverines.  Mike Hoeffel added a goal and assist over the weekend as the now resurgant Golden Gophers swept Wisconsin.  Jon Merrill's two points raised him to 4th overall in CCHA defenseman scoring, and tops among freshman defenseman. 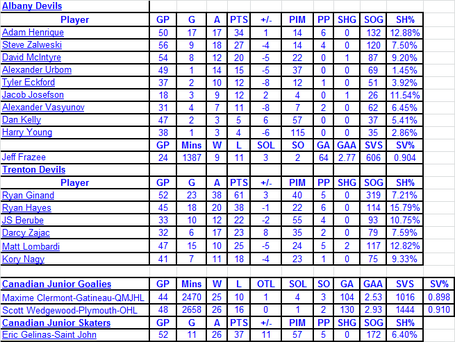 The Trenton Devils of the ECHL currently are still all alone in last place in the Eastern Conference with a 21-28-1-3 record.  The recent trade of Swift and Davis has also allowed Trenton to promote JS Berube and Darcy Zajac back up to Albany.

It was a 3-0-1 week for Albany. Wins over Charlotte, Worcester and Adirondack sandwiched a OT loss vs Binghamton.  The win over Worcester was in impressive fashion as Albany was down 4-1 with roughly 10 minutes to go in the content and came back with 4 unanswered goals.   Besides Adam Henrique (now up to 17 goals) the Devils have been led recently by new addition Steve Zalweski.  He has 5 goals in 6 games since joining the Devils two weeks ago.  Their current record of 22-29-1-3 still places them 13th in the Eastern Conference.  Jeff Frazee is back practicing (knee) and Tyler Eckford (personal) is still out for indefinite periods of time.

Per dr(d)evil's request I have added prospects Duncan Siemens, Mark McNeill and Joel Armia.  I also added a personal favorite of mine, Rocco Grimaldi.  Grimaldi, while lacking ideal size has gotten raves from all that have seen him play.  He is committed to go to the University of North Dakota next year.  Sean Couturier continues to pile up the points for Drummondville in the Q.   Finally, here are the updated International Scouting Services rankings from February.