2011 Trade Deadline: Who Have The New Jersey Devils Been Dealing With?

Share All sharing options for: 2011 Trade Deadline: Who Have The New Jersey Devils Been Dealing With?

With trades going down left and right, it's fun to try and speculate on what team might want an asset that your team has or what team has an asset that you want for your team.  While we can speculate about a trade between any team the reality is that there are certain teams that just don't make trades between each other that often.  The Devils and Rangers have never made a trade.  The Devils and the Flyers last trade was in 1986 and it involved Chico Resch.   After the jump I use information gathered from the Devils Media Guide to show the last time the Devils have made trades with other NHL franchises.

What's the above tell us?  Not much really, besides that the Devils seem to shy away from dealing within the Eastern Conference but might be willing to work a deal with a team in the offseason.  What I found interesting was there were so many teams (9) that the Devils had not made a trade with in over a decade.

What about the frequency of trades between the Devils and other organizations?  Below I list out all of the trades post-lockout that the Devils have made: 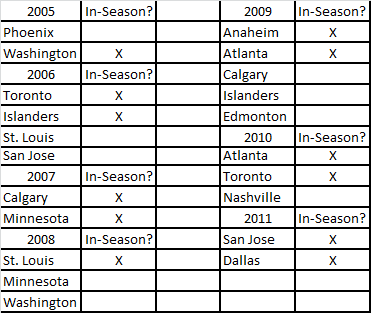 Only Atlanta and Toronto have entered into more than one in-season trade with the Devils post the lockout.   The Devils have also only made one trade in the division (with the Islanders in 2006).

That brings me to a question.  Would you care if the Devils made a trade with the Rangers or Flyers?  Why should it matter?  Shouldn't it be a case of trying to get the best return for your asset rather than cutting off potential buyers/sellers because they play in the same division or conference?