Since he was the only Devils NCAA prospect to score over the weekend, take a look at Mike Hoeffel's goal against Denver here.  Joe Faust continues to be a healthy scratch for Wisconsin, but should play big minutes next year with Jake Gardiner and Justin Schultz likely leaving for the NHL after the season.  Freshman defenseman Curtis Gedig sat both games this past weekend versus Michigan apparently due to illness. 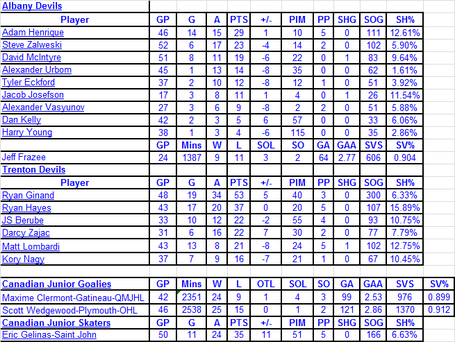 The big news for Albany last week was the trade that sent Patrick Davis and Michael Swift to the Worcester Sharks in exchange for former Devils defenseman Jay Leach and center Steven Zalewski.   Zalewski has responded with goals in both games he has played for the Devils.  Zalewski, ranked as high as 7th by Hockey's Future on the Sharks prospect list earlier in this season, could need a change of scenery as he has regressed from his 22 goal season last year in the AHL.

The Trenton Devils of the ECHL currently are still all alone in last place in the Eastern Conference with a 18-27-1-3 record.  The recent trade of Swift and Davis has also allowed Trenton to promote JS Berube back up to Albany.

Albany didn't have a losing week, splitting their games with a 4-3 win and a 3-2 loss agains the Charlotte Checkers.  Their current record of 19-29-0-3 still places them 14th in the Eastern Conference.  Both Jeff Frazee (knee surgery) and Tyler Eckford (personal) are still out for indefinite periods of time.

Maxime Clermont bounced back with 2 wins over the past weekend, one of those wins being a shutout.  Eric Gelinas continues to impress with his new club as he is now +21 in his 11 games for the Sea Dogs.  He has also averaged 3.4 shots per game and contributes about 3 hits per game.

It's status quo as far as prospects go.  Larsson is still injured, Strome is putting up tons of points and Couturier continues to be a two way force for Drummondville in the Q.   I will be adding 5 players for next week's update, let me know if you have any requests.