2011 Trade Deadline Question: What will the New Jersey Devils do with Andy Greene?

Share All sharing options for: 2011 Trade Deadline Question: What will the New Jersey Devils do with Andy Greene?

When speaking about the New Jersey Devils' offseason priorities, the first thing that comes to mind is Zach Parise. But Parise's future -in my mind- is likely settled by one factor: whether he wants to play the remainder of his career in New Jersey. The money is there, and he has proven himself a great player over the years. Decisions like 're-signing Zach Parise' aren't prefaced by questions like: Is he for real? Is he worth a long-term deal? Those questions are for players like Andy Greene.

Greene, a fourth year defenseman signed as a undrafted free agent from Miami of Ohio, is an unrestricted free agent at year's end. His first real shot at being a UFA (I don't count his two year deal signed in 2008) at age 27 will be Greene's best shot at securing a long-term deal and the boatload of money that would come with it. So what should the Devils do? Sign him to a market rate contract or attempt to move him before the trade deadline? Wait until the offseason and when he and his agent likely know that some clown of a GM will overpay him?

I honestly don't have a clear opinion yet. Maybe I am jaded by too many $3MM-$4MM a year contracts Lou Lamoriello has given out to defensemen recently (that would be you Johnathan Oduya)?

What I wanted to look at is the past free agent market for defensemen, pull out some comparable players to see what they were paid in unrestricted free agency, and then look at the defensive UFAs available on July 1st and try to figure out how long and how much it would take to keep Andy Greene a Devil. I will also try to gauge his trade value at the upcoming trade deadline to see what type of return he could generate.

Below I have put together a listing of the 2009/2010 defensive free agent signings that best represent what the free market value of Andy Greene could be.  I have pared the list by looking for players signing 2-4 year contracts for a yearly average of less than $4MM per year. I also only looked at unrestriced free agents.

Now, there are mitigating factors that influence the price of each player.  Would Rob Scuderi have received a 4 year deal if he had not had a great playoff run for the Penguins in 2009?  Would Jordan Leopold have received a better deal if he had not been injured for the Penguins in 2010?  The players above also have different levels of accomplishment/reputation that influenced their free agent contracts.  Considering the deals above I would think that if the Andy Greene that has played for the Devils the past two years was available as a free agent for the past two seasons he would have likely received compensation of:

But those hypothetical contracts exist in a perfect world.   Bad general managers can shift the market for a player very quickly, so it is quite possible that if Andy Greene becomes a UFA on July 1st he would get "Sathered" and overpaid in free agency.  Now let's look at the actual market for the 2011 defensive free agent class.  Once again I have scrubbed the list for players who I feel are young enough and productive enough to receive long term contracts (For example I didn't list players over 32 years old).

Further, I have ranked each player by a tier.  The top tier represents players that teams would likely target as a top defenseman.   The second tier is for quality players who would be cheaper options than the top tier, but players who won't be looked at to be a top pairing defenseman.  The third tier would be players viewed as a bottom pairing player who wouldn't be a liability playing on the second pairing.  The fourth tier represents stop-gap options for teams who may want more of a veteran presence for a lower pairing defenseman to fill out the roster.  Once again the below list is only UFAs.  RFAs were not considered. 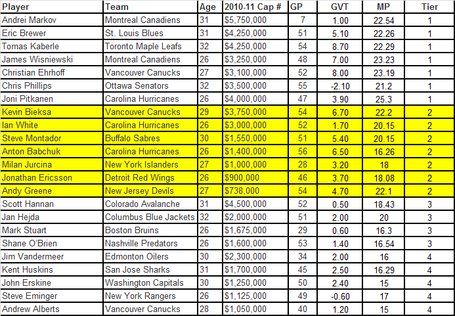 So you have a sense of the player's effectiveness this season I have also listed Goals Versus Threshold (GVT) ratings and minutes per game.  Only seven players have been more effective than Greene this year.  Considering the Devils recent resurgance I could see Greene's GVT rating passing Brewer and possible Montador. Along with Jonathan Ericsson of the Red Wings, Greene could be an under the radar signing for a team that doesn't have the money to spend on a Kaberle or Ehrhoff.   The deal that scares me is a contract extensionrecently given to the Stars Trevor Daley who received a $3.3MM per year deal.  A comparable player to Greene, Daley received a six year deal from the Stars.

The problem now is can the Devils sign him to a market friendly deal during their exclusive negotiating period after the season. (This would all be much easier if Lou Lamoriello tried to negotiate an extension early with Greene, but unless you are Marty Brodeur that doesn't happen.)

Even if they can re-sign him, how can they be sure they just bought the same level of production?  I am assuming that he continues to play at the level he has for the last year and a half.  Is it safe to do this. Even though he could be a great value signing he could just as easily be another Johnny Oduya.   He could be signed to a 2-4 year deal and not meet the expectations of a long term, big money contract. Without a long track record to go on it is tough to commit long term to him.   With the Devils in a tough cap situation next year and plently of money needed to sign Parise can the Devils even afford to re-sign him?

More importantly, if he is to leave who replaces his offensive production and minutes on the blueline? Matt Taormina? Anssi Salmela?  Matt Corrente?  Mark Fayne? It would be hard to count on any of those players to jump into a 20 minute a night, offensive defenseman role.

The other aspect to Andy Greene's current situation is of course the trade deadline.   Greene, with a very managable cap hit, would be highly sought after should he be available.  What type of value would he get back?  Judging on past trade deadlines the normal return would be a 2nd round pick.

That said, this season has seen more prospects and 1st round picks involved in trades than previous years.  Ty Wishart going to the Islanders for Dwayne Roloson and Jake Gardiner traded to the Maple Leafs in the Francois Beauchemin deal could mean that Greene might be worth a bit more this year.  It would preferable to receive a player who is closer to NHL than one who is just starting out on that career path.  It is important to note that both Wishart and Gardiner were good, not great prospects on their respective clubs.  A good comparison to prospects in the Devils system would be Eric Gelinas or Brandon Burlon.  Not the top prospects, but in the top 5/top 7 variety.

But don't forget draft picks.  If Carrie Underwood's husband is worth a 1st round pick and a conditional pick and Kris Versteeg is worth a 1st and 3rd, the market might be ripe for seller's this year.

If Greene was to be traded who would be a potential trade partner?  Looking at the teams competing for the playoffs and with defensive needs I think you could say that the following teams would have interest in Greene:  San Jose, Boston, Nashville, Vancouver and Tampa Bay.

The team with the best assets to target would be Boston.  With extra picks in the 1st round (Toronto) and 2nd round (Minnesota) and a pretty good prospect pool (Zach Hamill-C or Jared Knight-C/RW would be quality pick-ups)Boston would have the most expendable assets to work with.   But will Lamoriello deal with an eastern conference team?  I would hope so, as Boston bidding on Andy Greene (or any Devils player) would be a very good thing.

Nashville, who just traded their 1st round pick in the 2011 draft for Carrie Underwood's husband still has two 2nd round picks (one being the Devils via the Jason Arnott trade) and had a few promising prospects that the Devils could use.  I would hope and pray for Ryan Ellis-D, but that won't happen.  Prospects they would possibly give up in a deal for Greene would be Austin Watson-RW or Roman Josi-D.  Nashville is not in desperate need of another offensive defenseman so it might be tougher to get more out of them, than say Boston.

Tampa Bay (according to Tom Gulitti) had interest in Greene earlier in the season but has since signed Marc-Andre Bergeron to help with offense from the blueline.  The only problem is that MAB doesn't play defense.  While they might have need for a player like Greene, Lightning GM Steve Yzerman doesn't seem likely to give up any draft picks.  If they do entertain trading prospects like Richard Panik-RW or Brock Beukeboom-D that should be something the Devils look into.

Vancouver has been ravaged by injuries to their defensive corps.  With cap troubles in addition to the injury concerns Greene would be an attractive option to the Canucks who are looking like a Stanley Cup contender.  They have all of their top picks (1st three rounds) for the 2011 draft and a nice offensive defenseman in Kevin Connauton in their system.

San Jose could also use Greene's offensive abilities, have their top 2011 draft picks available but their organizational system doesn't have great depth at offense or defense.  They do however have good depth at goaltending.  Alex Stalock, playing in Worcester, might be a nice fit for the Devils as a starter at Albany or a backup in the NHL next year.

With his impending free agency and the Devils likely to not be in playoff position, Greene poses some tough questions to Devils management.  Go against organizational philosophy and discuss a contract with him before the trade deadline?  Wait until the off-season to re-sign him, worrying that the closer he gets to unrestricted free agency he might get blown away by an offer?  Trade him for a premium draft pick or a prospect that is close to the NHL?

What would I do?  I would attempt to strike a deal in the 3 year/$2.5MM range before the trade deadline.  If that wasn't going to work I would have to look into trading him.  While you always want to sign your own free agents-especially those you found via undrafted free agency-there has to be a ceiling on what you will pay that player.  I like Andy Greene and hope he stays, but I would not be willing to let him Oduya the roster.

(My favorite personal unicorn trade: Jason Arnott and Andy Greene to Boston for Toronto's 1st round pick in 2011.)

What will the Devils do?  I doubt the Devils will trade him by the trade deadline unless they are blown away by an offer.  It's also unlikely they would negotiate with him before the trade deadline.   They will likely use the exclusive negotiating window to try and lock Greene up, but I fear they will likely overpay him and sign him to a $3.25MM-$3.5MM average salary per year.

So now it's your turn?  What is Andy Greene worth?  Should he be moved before the trade deadline?  If he is moved what is a fair return?  Do you think I am missing any potential trade partners?  Sound off below and thanks for reading.