It's that time again so after the jump, find statistical updates on Devils prospects from the NCAA, Canadian Juniors, Albany and Trenton.

It was an uneventful weekend for the Devils NCAA prospects.  The only player to register a point was Seth Helgeson of Minnesota who is not exactly a point scoring machine.  Joe Faust of Wisconsin has been out of action recently  due to a shoulder injury and because of the return of John Ramage from the World Juniors Tournament.  It's been a rough year for Faust who the Devils picked in the 4th round in the 2010 draft as he hasn't received the playing time he had hoped he would.  However, let's remember that he is a true freshman and he is playing for a strong program in the WCHA.  We should see him get a chance to make an impact for the Badgers next year. 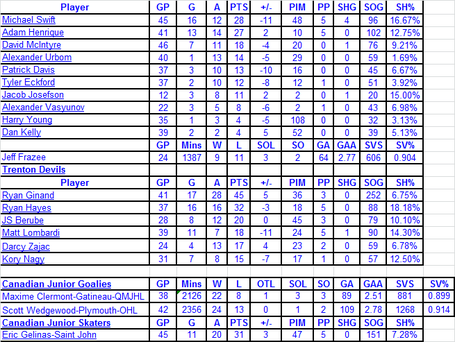 After a 6-4 win over Bridgeport (where Jacob Josefson scored two goals) they dropped their next two games. Albany lost to Wilkes-Barre 4-1 on Friday night and were embarassed 6-1 by Rochester right before the AHL All Star Break on Saturday night.  Their current record of 18-25-0-3 places them 13th in the Eastern Conference.  Both Jeff Frazee (knee surgery) and Tyler Eckford (personal) are still out for indefinite periods of time.

Ryan Hayes, a undrafted free agent from the Plymouth Whalers of the OHL has been one of the few bright spots on the Trenton Devils roster.  With 32 points in 37 games he is currently tied for 7th in scoring among ECHL rookies.  Darcy Zajac continues to play well as he has 17 points in 24 games on the season with 9 of those points coming in the past 10 games.  The Trenton Devils of the ECHL currently are all alone in last place in the Eastern Conference with a 15-23-1-3 record.

Since his trade to the Saint John Sea Dogs, Eric Gelinas has been putting up some great stats.  Finally playing for a good team in the QMJHL Gelinas has 2 goals and 5 assists with a plus 13 in 10 games.  Even more impressive is the 36 shots he has put on net.

As a top 10 pick is still likely, I will continue to update the top prospects that will be available in June's draft.  If there is someone you think that I should also track please let me know and I can easily add them.   Both Adam Larsson (groin) and Gabriel Landeskog (ankle) have been out with injuries the past few weeks.   One player that I have seen when watching the Saint Johns Sea Dogs that has been impressive is Jonathan Huberdeau.  Scoring at will for Saint John and his June birthdate gives you the hopes that more development is on the way.

If you are looking for more information on defenseman Ryan Murphy you should read this article on NHL.com.  Murphy has a strong commitment to playing defense that he wants everyone to recognize.