Share All sharing options for: The New Jersey Devils Aren't Awful in the First Two Periods This Season

Last season, the New Jersey Devils struggled mightily under John MacLean during the second period on a regular basis. It was awful and, in retrospect, a reason why fans didn't miss him when he was fired. This season, the period of doom appears to be the third period, where the Devils have been out-shot and out-scored on a regular basis.

However, there are two other periods in regulation. It may be worth seeing how the Devils are doing there. Are the Devils at least starting the game well? Are the Devils doing better in second periods this season? How are the Devils looking when they carry a lead into the second? Please continue on after the jump to see a chart of game-by-game results in both periods as well as some conclusions. 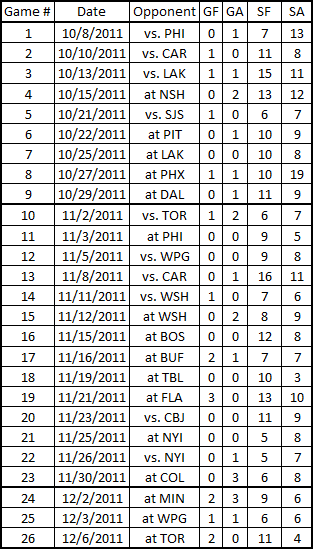 It's not great that they have finished 10 of these first periods losing in the game. Neither is the fact they only have had 5 first periods where they go into the second period with a lead. I take solace in the fact that they're not getting heavily out-scored like they have been in the third period. Still, it's something to work on. Should the Devils continue to regularly out-shoot their competition in the first period, I'm confident the goals will come and leads will become more common.

The second period, believe it or not, has been the best period in regulation for the Devils this season. It's a big turnaround over last season. However, it comes with one important qualification. Here's the chart of results: 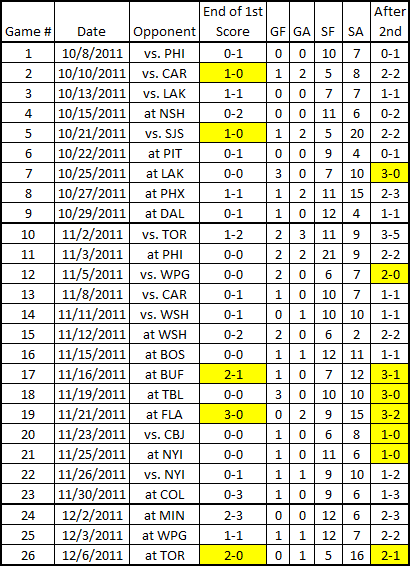 That last part is rather important. In each of those 5 games where the Devils entered the second period with a lead, they were out-shot. The fewest was 3 in Game #2 and the most was 15 in Game #5. Moreover, the Devils have allowed at least one goal in four out of those five games. The sole exception was Game #17, where the Devils added to their 2-1 lead in Buffalo in the second period. While five games is a small population size, it's definitely not something the Devils can afford to continue. Especially with their mostly poor third period performances.

There's the qualification: the Devils' best period is the second period except when they have a lead. In fact, it's arguable that the Devils aren't good with leads. They haven't gotten too many of them, and in the games when they do, they tend to get out-shot along with allowing a goal in the second and/or third periods. With respect to winning percentage in the league, their record when they're ahead after one or two periods is in the bottom third of the league.

This raises a bigger question: why are the Devils particularly bad with leads? Well, that's something worth digging deeper in another post. For now, I'll leave it at this: the Devils aren't awful in the first periods and they've been pretty good in the second periods. Could they be better? Of course. In my opinion, the Devils should always strive to keep firing pucks on net in the hopes of getting more goals, getting more leads to carry into periods, and to have a bigger buffer on the scoreboard when the third period comes around and something eventually goes awry on the ice. While they've been out-shooting their opponents across each of the first two periods, they're still in the bottom third in shots on net overall. A more competent power play (stop laughing) would also help in the scoring department; while fewer turnovers in general can help cut down on the goals and shots against. It may even help preserve some leads and create some more.