The holidays have put a screeching halt to the games played by the AHL, NCAA, CHL and European leagues. After the jump I update statistics for some CHL/AHL players and look at some potential NCAA free agents that might be on the Devils radar in a few months. 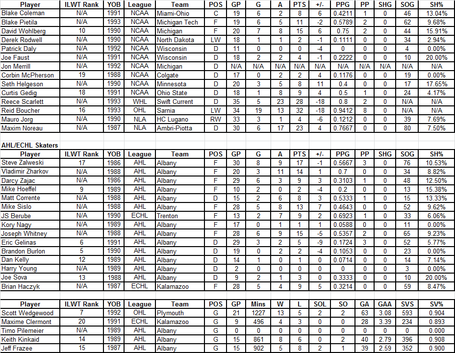 The NCAA free agent class is something I followed intently last spring. It's all the players undrafted by NHL teams that have ended up being a bit better than scouts projected and now get a second (or maybe first?) chance. The Devils inked three college FAs in defenseman Joe Sova, goalie Keith Kinkaid and right-wing Mike Sislo. Sova has bounced from the ECHL to the AHL this year but has shown good offensive abilities while Sislo has been sporadically productive for Albany. I believe Sova to have the higher upside and a good comparison for him might be Kurtis Foster. Kinkaid was dynamite in the beginning of the year for Albany, cooled down for a stretch but has started to heat up once again. Kinkaid and system veteran Jeff Frazee have helped provide Albany with an effective 1-2 punch in goal.

(Since Joe Whitney only has an AHL contract, I've not included him as a officially signed by the Devils)

(note that the stat columns with 'C' in front of it (CGAA, CSV%, etc) are the college career stats the player has accumulated)

I will add names to this list as the NCAA season progresses but I am not seeing the 'prize' of this free agent class. Two years ago it was Bobby Butler of New Hampshire (signed by Ottawa), last year it was Andy Miele of Miami-Ohio (Phoenix), Matt Read of Bemidji State (Philadelphia) and Stephane DaCosta of Merrimack (Ottawa). Perhaps this year's prize might be Jack Connolly of Minnesota-Duluth or Rylan Schwartz of Colorado. I will focus on this more intently as we get to April, but thought I would get everyone a bit familiar with some of the names out there.

Maybe not this spring, but keep an eye out for Andy Iles. While a bit on the small side, Iles was the US WJC backup goaltender to Jack Campbell last year, and is the emergency goaltender behind Campbell and John Gibson. (Campbell was a 1st round pick of the Dallas Stars in 2010 and Gibson a 2nd round pick in 2011 by the Anaheim Ducks.) Iles has put up good numbers early in his Cornell career and as the Devils search for that netminder of the future, perhaps a goalie like Iles can give them additional depth.

The World Junior Championships are upon us and the Devils have two representatives. Scott Wedgewood will be the backup goaltender for Team Canada, and Jon Merrill will return to the blueline of Team USA.

Wedgewood is in an interesting spot. Starter Mark Visentin (you might remember him letting in goals every 37 seconds in the gold medal game last year vs. Russia) returns to the team and his 'experience' has helped annoint him the #1 goalie. If Canada drops an early game, can Team Canada coach Don Hay not give Wedgewood a shot?

I will be candid now when I say that Merrill's inclusion on the US team makes it a bit hard for me to root for them. Apparently talent trumps character. With injuries on the blueline Team USA brings back Merrill despite the fact that he has been unable to get back onto the ice to play for his college team. After reading Bob McKenzie's article on Merrill a few weeks ago, I am pretty sure I am done 'rooting' for him. Already with concerns surrounding him after his troubles in the US NTDP, his 12 game suspension in the fall should have set him straight. Instead he repeats the same violation before his suspension is up.

I hope he sets himself straight and has a great future in professional hockey. I just hope he doesn't do it in a Devils uniform.

Maybe after the Scott Niedermayer retirement ceremony, where I heard Scott and his teammates reflect on what makes teams champions, it seems more obvious that Merrill doesn't have what it takes to be a good teammate.

That's it for this week, leave any questions or comments below. Thanks for reading.