There are two basic facts about the performance of New Jersey Devils 2011-12 season. Their penalty kill has been fantastic; and their power play has been atrocious. The two sides of special teams basically act as Jekyll & Hyde. The Devils have been monsters on the PK when it comes to preventing and stopping shots. On the flip side, the team has been as threatening as a lithe, mild-mannered man on the PP.

Today, I want to highlight who is causing these situations to happen. After all, unless the player mouths off to a ref or clears a puck clean over the glass in their own end, there cannot be a power play without a Devil drawing a penalty. Likewise, there cannot be a penalty to kill without a Devil taking one, exceptions aside. By knowing who is drawing and taking calls, we can focus on who needs to avoid fouling opposing players. We can identify who needs to keep drawing calls, or - given how bad the power play is - try to draw fewer calls.

Interestingly, the Devils are not in last in either category. According to the stats at NHL.com prior to Thursday's game, the Devils are 23rd in the league with 82 power play opportunities; and 15th in the league with 89 shorthanded situations. While it's a step in the right direction for the team to not be dead last in power play opportunities, it's a step in the wrong direction for the team to be in the middle when it comes to giving the other team power plays. Thankfully, the penalty killers have been superb. However, the Devils can help themselves by taking fewer calls. This will reduce pressure on the PK units and when the units hit a lull - a 94.4% success rate isn't going to last forever - it will reduce the overall effect of said lull.

Which Devils are taking the calls this season to give the PK work? Who's been drawing calls that have dragged the horrific power play on the ice? Thankfully, Behind the Net keeps track of that information on a regular basis. Here's the list of penalties drawn and taken at 5-on-5 for the Devils and an associated chart that pares it down to the main stats. 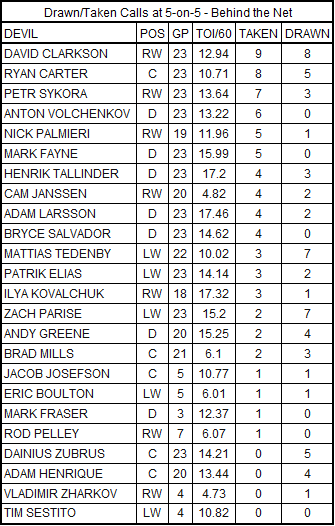 For the calls taken side, your infamous leaders are forwards: David Clarkson, Ryan Carter, and Petr Sykora. Clarkson has always been a banger and he's usually good for over 100 minutes in penalties in a full season. I'm not surprised he's leading the team in taking calls. Carter's also a banger, but he's not too bad on New Jersey. Three of his eight taken calls were while he was a Florida Panther for seven games. Still, he's going to rack them up given his physical style of hockey. The real surprise here is Sykora. The most PIM he ever had in a season was 41, yet he's already got 18 in 23 games. The guy has had issues with his stick contacting opponents in the first month of the season when he racked up most of his 7 taken calls. He's cut down on that in November, but he remains up there.

As a quick aside, I want to show off how I know Sykora's stick has been causing most of his calls. The split stats on each player's page at NHL.com actually lists what kind of penalties they have been called for. While it doesn't split up what was taken at evens and what was taken during a power play; it's good detailed information. Here it is for Sykora. He has been tagged for three hi-sticking calls (one for a double-minor), two hooking calls, two goaltender interference calls, an interference penalty, and a holding call. The majority of his penalties have involved his stick, so therefore, we can conclude that's been an issue at some point this season. Now if he can be careful on when he hits opponents, then he'll be better off.

Moving onward, defensemen mostly comprise the taken calls list beyond the three forwards (shake your heads, Nick Palmieri and Cam Janssen). In a way, this shouldn't be a surprise. When a defender gets beat, usually they'll try to penalize an opponent just to prevent them. In most cases it's not good when that happens; but it does happen. It also tends to happen when physical defensemen (e.g. Bryce Salvador) get a bit too rough or mis-time their checks. Anyway, I find it a little bit distressing that Anton Volchenkov, one of the Devils' top penalty killers, leads the blueline in taken calls with 6 and most of the blueline is right around there. They could stand to be a bit smarter in their own end with respect to how they physically handle opposing players. At least Andy Greene's been good about staying out of the box.

Who's been drawing the calls? Well, Clarkson actually leads the team with 8 drawn calls. I guess his physical style has led opponents to respond in kind? I'm not sure. There's no helpful chart of penalties drawn like penalties taken at NHL.com. Still, it's some evidence that Clarkson isn't totally hurting the team. He just needs to cut down on taking calls so he's not just giving and taking in equal amounts. Following Clarkson are two skilled wingers who like use their speed to get by (or through) defenders: Mattias Tedenby and Zach Parise. Each have 7 and I leave it to you to decide which more impressive. Tedenby drawing 7 calls despite limited minutes and having been shuffled around the lineup; or Parise drawing 7 calls as evidence that opponents still respect him enough to foul him despite the struggles he's had this season?

Personally, I'm impressed with three guys not named Ryan Carter behind those two. Dainius Zubrus and Adam Henrique have drawn five and four calls, respectively, without taking a single one yet this season. That's great to see that they haven't hurt the team at evens in that regard. You'd think that with Zubrus' tendency to go into battles along the boards that he'd take a call here and there. You'd think that a rookie like Henrique would make a mistake here or there that would lead to a trip to the box. Yet, both have kept clean records in that regard. The third is Andy Greene, who's somehow drawn more calls than he takes. It's fairly difficult for a defenseman to get a positive differential given that teams make a point of it to avoid taking penalties while they're on offense. Somehow, Greene's done it so far this season with 4 drawn and only 2 called. I hope all three are able to keep it up throughout the season.

Knowing who's been causing PK and PP situations to happen at this juncture allows us to identify who to be concerned with taking a call when it's not needed, or who to believe will try and draw something when the Devils could use a man advantage. Of course, the cynic would suggest that the Devils should strive to draw as few calls as possible to avoid seeing the power play. Strawman cynicism aside, there's still a lot of season left to play and this information certainly could change. It'll be worth updating this near the end of the season if only to answer some further questions like the following: Will the third line end up collectively drawing more calls than they take? Can Clarkson get on the positive side between drawing and taking calls? Will Patrik Elias or Ilya Kovalchuk, to use a popular phrase, get going when it comes drawing calls? Will the Devils defense limit the calls they do take? Where will the Devils end up in the league when it comes to shorthanded and power play situations?

In the meantime, let me know what you think the answers could be as well as your thoughts on the Devils drawing and taking calls in the comments. Thanks for reading.