One of the challenges in evaluating prospects in the different feeder leagues is the differences each league has and accounting for that when looking at prospect statistics. Whether it's the AHL, CHL, NCAA, USHL or European Leagues the feeder leagues all have varying levels of talent, physical play, age and even rink size. Gabe Desjardins' Behind The Net site does a great job in helping to predict success of a prospect based upon scoring outputs the player would have in his draft year.

The main challege is the statistics available in these leagues. Some leagues (QMJHL, AHL, SEL) keep a good record and availability of stats that are helpful in evaluating the progress of prospects. Others (OHL, WHL) have very limited data available. While you can find the basic stats (points, penalty minutes, rating and sometimes shots) fairly easily on any player, statistics based on game situation (even-strength, power play, penalty kill) are very tough to find. This makes goalie evaluation (by statistics) particulary difficult because we don't have a breakdown of shots in every different game situation.

I was specifically interested in situational goalie statistics because as I checked through AHL box-scores I noticed that Jeff Frazee had let up a large amount of power-play goals. That's why I have tried to figure out even-strength save percentages for the goalies in the Devils system. In the NHL it's easy to figure this out as it's readily available here on the NHL.com statistics page. The AHL, CHL, etc offer no such breakdown. (To be fair, the AHL Stat Report (updated daily) has a lot of good information available here.)

After the jump, I make some assumptions (based upon NHL data) to help try and figure out even-strength save percentages for the Devils goalies. And as always, I updated the statistics for all of the team's prospects. Note that activity of the NCAA prospects was limited this week due to the holiday vacation. 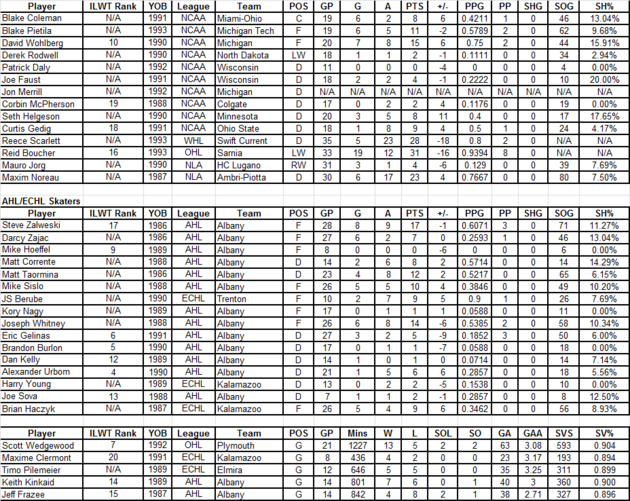 To try and figure out a general even strength save percentage I looked to the NHL statistics as a guide and looked through the NHL.com stats page that breaks down goaltender shots against by each particular situation. I then found the average porportion of power play shots (PP Shots) against the number of total shots a goaltender has faced. I used the statistics for the top 30 goaltenders in the league to find the proporation/rate of shots faced on the power play. Rates varied here from 14% to 21% for each individual goaltender, with 17% roughly being the average. Applying two sets of power-play shot percentages (17% as the average and 21% as the high point) to the totals of goalies Jeff Frazee, Keith Kinkaid, Maxime Clermont and Scott Wedgewood, would result in the below ADJ ES Shot % or the estimate of even-strength save percentage each goalie 'could' have.

Why 'could'? Notice the PPG% (PPG%=Percentage of power play goals vs. total goals) column. All of the numbers there are a bit higher than the typical NHL averages. NHL PPG% averages were scattered by individual goalie but came to an average of roughly 23%, much lower than the percentages the Devils goalie currently have. There could be a couple of reasons for this, the first being that a higher percentage of shots in the AHL, ECHL & CHL are on the power play. The second is that each of the respective teams (Albany, Kalamazoo, Plymouth) that the goalies play for are just really bad on the penalty kill.

I think you can make cases for either reasons, or others, so if one thinks that perhaps you should use a higher number for percentage of power play shots against, the ADJ ES Shot% typically drops down one notch for each increase in the assumed percentage of power play shots against. So if you wanted to say that 25% of the shots each of these goalies have faced while on the penalty kill than you would look at ADJ ES Shot %'s of .921 for Frazee, .904 for Kinkaid, .914 for Clermont and .909 for Wedgewood.

What's good in the NHL? You can look here for that answer.

This isn't a perfect assumption/estimate and I think the percentage of shots varies by feeder league. I would imagine the percentage of power play shots to increase as go from the the AHL to ECHL/CHL. That assumption is just based upon the zone possession I have seen in those games, but again without data it is hard to accurately state what those variations are.

Frazee and Clermont are playing better than their basic stats indicate.

Well, what about other goalies in the ECHL, AHL, etc? I am starting to keep a log of the top goalies in each of these leagues to draw a comparison. The challenge is going through all the box scores and pulling out the data (special teams goals against) from individual box scores. The AHL does it on a team level and if one goalie gets the majority of starts for his team, than it's easy to figure out. The reality though is that most teams in the feeder leagues split starts and have multiple goaltenders of record, making it a time-consuming process.

This was linked to by user AlphaSigDevil48 in the fanpost section of the site, but I hope you have taken the time to read TSN's Bob McKenzie's piece on Jon Merrill. The part that stuck out to me the most was (emphasis mine):

While no one is prepared to publicly specify the nature of the "violations," it is common knowledge within the NHL community that Merrill has been dealing with some off-ice issues. And, in fact, one of the violations occurred while he was already under suspension (during the first 12 games) for a prior violation. The secondary violation is apparently the reason he's still not being permitted, for now, to play any games for Michigan.

Well, at least now we know why Merrill hasn't been given a firm timetable yet on when he will return to game action.

You will notice the addition of Timo Pielmeier in the statistic table above. He was the additional body thrown in by Anaheim in last week's Kurtis Foster trade. He is on the last year of an ELC and I don't expect him to be re-signed. Since Anaheim was close to the maximum contract limit before the trade last week, it makes sense they wanted to even out the trade so they have some flexibility as they had 49 active contracts before the deal.

Albany has been in a free-fall since Alexander Urbom and Matt Taormina were called up to the NHL club. With Matt Corrente already injured, Dan Kelly in and out of the lineup and Jay Leach just getting back from injury the depth of the Albany defense was quickly depleted. I was hopeful that some of the younger prospects would step up to fill the voids left by the callups, but that certainly hasn't happened yet.