It's prospect update time! After the jump we'll look at the first NHL seasons of Adam Larsson and Victor Hedman, and of course get all the updated stats for Devils prospects. Click the link for more. 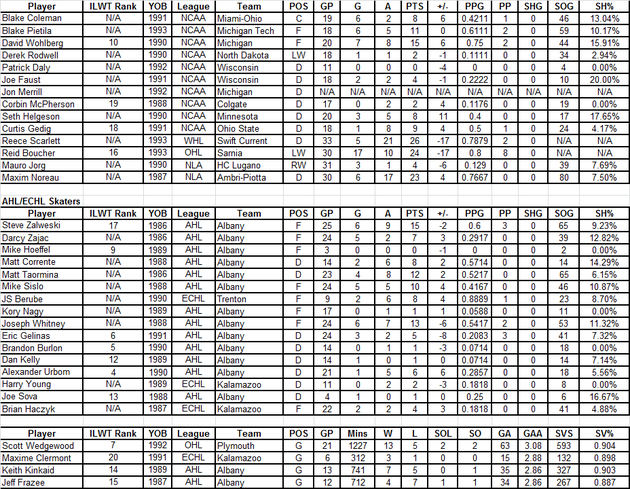 Before the 2011 draft one of the players Adam Larsson was constantly compared with was Victor Hedman. Player comparisons are always challenging and I try not to make them if I can. Hedman and Larsson however shared a very similar development path. Both played big minutes in the Swedish Elite League as 17 and 18 year olds (you can view the SEL time-on-ice comparison I wrote on them back in the spring here), were top 5 picks in the NHL draft and were thrown right to the wolves and started in the NHL immediately even though both could have played at the AHL level. Oh yeah, and they are both Swedish.

Taking a look at Larsson's season to date, Hedman's first NHL season and Larsson's 82 game projected statistics I tried to see if there were any glaring similarities and differences in their first seasons. To do this I utilized statistics from www.behindthenet.ca and www.NHL.com

First a disclaimer. Some of the NHL's 'Real-Time Stats' (Hits, Blocks, Takeaway, Giveaway) are bound to be subject to some scorekeeper bias, even moreso than other stats like assists and shot totals (like how the Rangers pump up Henrik Lundqvist's stats by claiming a shot that hits the glass was a shot on goal). Also if you have never seen the extremes of scorer bias, I suggest you read this article from Deadspin.com in 2009. 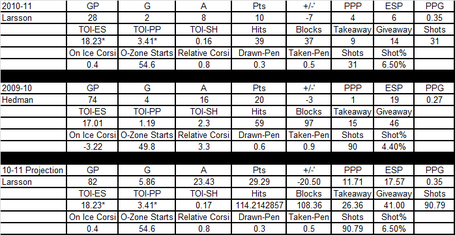 A few things jumped out at me:

1. While Larsson is projected to score about 29 points, he still would not have more even-strength points then Hedman had in his first season. Larsson is on pace for 17 even-strength points, good for a rookie defenseman but his power-play points help inflate his overall stats. That said, if Larsson finds himself on the second power play unit now more than he was earlier in the year, his point totals might suffer a bit.

2. I was very surprised to see Larsson's hits, takeaways and block totals higher than Hedman's (again, remember scorer bias) with Larsson on pace to almost double both the hit and takeaway statistics that Hedman had in his rookie season. Larsson is playing a much more physical game than what I thought he was capable of. Wait, Larsson only has 14 giveaways so far this year? Maybe it's because of the chances they have led to, but I thought Larsson had a few more giveaways than that.

3. Hedman might have played more tough minutes than Larsson. Taking zone starts and even-strength CORSI stats into account Larsson seems to be given more favorable matchups and opportunties in the offensive zone. We can certainly see that Tampa Bay trusted Hedman on the penalty killing unit (or they had no one else to use) more than Larsson, while Larsson has averaged almost 4 minutes per game on the power play unit.

4. Teammates. Behindthenet.ca has the great feature of looking at a player's primary defensive partners/linemates during a given season. At even-strength Larsson is most likely to play with (in order) Andy Greene or Bryce Salvador as a defensive partner and Zach Parise, Ilya Kovalchuk and Danius Zubrus are most likely to be out on the ice with Larsson during a shift. Hedman was primarily defensive partners with either Kurtis Foster or Mattias Ohlund. He also ended up on the ice with the top Tampa Bay offensive players like Vincent Lecavlier, Martin St. Louis and Steven Stamkos.

For better or worse, Larsson is a Devils top defenseman playing in excess of 20 minutes a game at the age of 19. He will have his ups and downs this year, but if he is on the same type of career trajectory as Hedman (who was a top player on the Tampa team that went to the Conference Finals in his second year) the growing pains will eventually be worth it.

Jon Merrill, still on indefinite suspension from Michigan, is one of the 29 invitees to the United States World Junior Championship team's training camp. He has the support of Michigan in going to the US WJ camp and is said to be in good shape as he is practicing with Michigan, just not playing. Unless he is incredibly rusty or out of shape I would expect him to make the team and have a big impact for the future gold medal winning US team.

Scott Wedgewood is currently one of four goaltenders at Canada's WJC team's training camp. With Mark Visentin entering camp as the likely #1 goalie, Wedgewood's chances to make the Canadian team at 1 out of 3. To make the team he must beat out Edmonton's Tyler Bunz and Phoenix's Louis Domingue.

The wealth of defenseman of the Albany Devils has taken quite a hit lately. With Matthew Corrente and Jay Leach battling injuries and Matt Taormina and Alexander Urbom recalled by the NHL club, the short-handed Albany team lost both games over the weekend. With some more time to prepare before their next contest I would hope players like Joe Sova, Dan Kelly and Eric Gelinas can step up and stablize the blue line.