It's prospect update time! After the jump I'll talk about Joe Sova's time in the ECHL, goaltending depth and ask if we should we get a campaign going for Brandon Burlon to see some playing time in Albany? 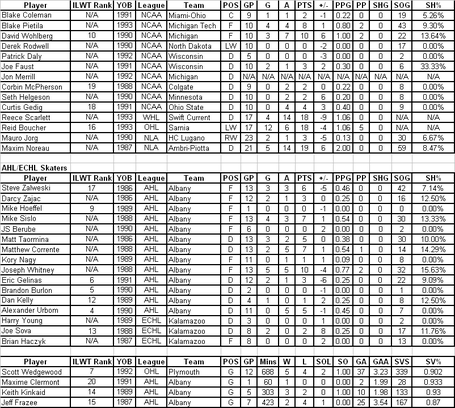 The Week That Was:

They are out of the cellar!  Albany's 3 point weekend (a win, and a shootout loss) pushed them to a 6-6-0-1 record good for 13 points and fourth place in the Eastern Conference's Northeast Division.  They are 3-0-0-1 in their last four games and have bounced back very nicely from their initial struggles.

Forwards Joe Whitney and Steve Zalewski have paced the Albany offence with a combined 8 goals and 74 shot on goal.  Whitney, the rookie camp standout, was a unsigned free agent from Boston College had a solid college career (stats are here) and has performed well at the AHL level despite his smaller stature.  He checks in at 5'6 and 170 pounds.  Whitney is currently ranked 7th in total points for all AHL rookies.

Michigan sophomore Jon Merrill's 12 game suspension is officially over after Friday's game.  Whether he plays or not is still an open question.  He recently received clearance to practice withthe team again.  With Michigan struggling a bit in CCHA conference play, I would expect he returns sooner rather than later.

Last week, Sova (I wrote a profile on Sova back in March) was awarded the ECHL Plus Performer Award for Octoberafter having a plus 8 rating in his time with the Kalamazoo Wings.  I realize plus/minus ratings aren't that efficient in judging a player's value, but it is still a commendable award, especially in the high-scoring ECHL.

Sova was recently profiled by a local paper in Kalamazoo and I suggest you read the article when you have a moment, as Sova comes off as very positive and motivated.  The quote that will be most interesting is this brief assessment of his play from his defensive partner, Sam Ftorek:

"He's easy to talk to. For me, it's nice because if we're struggling or not getting out of our zone, we can talk about what's going on and he's really open to listening."


I am still a bit surprised that Sova was sent down to the ECHLafter his 11 game stint with Albany last year.  From the games I watched he certainly had some learning to do on the defensive side, but was a nice boost to the offensive attack when he was on the ice.  At this point, the positives you can look at are that he is getting tons of ice-time, is becoming accustomed to the rigors of a full season schedule of professional hockey, and has played well.

Rookie defenseman Brandon Burlonwas a healthy scratch for both games over this past weekend.  Perhaps he is injured. (he is listed as a healthy scratch) Maybe he has looked terrible in practice.   If he is injured, then fine.  If he is not, he needs to get in some game action.  Send him to the ECHL with Sova.  Play him over Jay Leach or Peter Harrold.  But please Coach Kowalsky, #FreeBurlon!  #FreeBurlon will be a hashtag I will sport each time Albany plays.  I expect it to have no impact whatsover, but hey at least I am making my thoughts heard.

(Note: Bob McKenzie just reported that Rod Pelley and Mark Fraser are on waivers.  Witha few teams in need of defensive help, I think Fraser might be a candidate to be claimed.  This will certainly help with #FreeBurlon and possibly bringing Sova back to the AHL.)

Another week, another expert predicts the Devils 'might' be interested in goalie named X. This time it was Darren Dreger of TSN offering up possible landing spots for Vancouver Canucks backup goaltender Cory Schneider.  With the 'Devils need a goaltender for the future'is an easy statement to make (especially with the older duo the Devils have at the NHL level) but it never takes into account the Devils recent investment into goaltending: Keith Kinkaid, Scott Wedgewood and Maxime Clermont.

Kinkaid, (I profiled him back in April) sporting a nifty .930 save percentage (helped by his first shutout on Friday night) in his first professional season, was signed as a unrestricted free agent over the summer. The Union college product was an All-American last year and judging by his starts in Albany and the fact that he was the goaltender recalled when Martin Brodeur was inactive with a shoulder injury, I think you can start to conclude he seems to be on the fast-track to the NHL roster next year. (While it's not that important I thought it was interesting that a team on a financial budget like the Devils would have made Jeff Frazee the call-up. Why? Frazee's salary of $525,000 compared to Kinkaid's salary of $900,000.$615,000. EDIT. It was brought up in the comments by Triumph44 that Kinkaid's base salary was lower than I had initially thought. So basically the salary difference was insignificant. Bad job by me, for not realizing there were bonuses in that $900K reported on Capgeek.com )

Scott Wedgewood (3rd round pick, 2010) has been inconsistent so far this year, but bounced back nicely over the weekend with a shutout win and a 32 save effort in a shootout loss.  Wedgewood has a very good backup in Matt Mahalak who will help ease the burden on Wedgewood during the year.  I felt that Wedgewood struggled a bit during the end of last season with all the game action he had faced.  Wedgewood's team, Plymouth, has rotated Mahalakin frequently so far this year and with Wedgewoodlikely signing a professional contract next year and his probable participation with Canadian World Junior team, it's not that surprising that Mahalak has been playing as much as he has. Expected to make a deep OHL playoff run,  Plymouth having two  capable goalies is a necessity.

Maxime Clermont, (6th round pick, 2010) had a superb run in last year's QMHJL playoffs after losing his job late in the regular season.  Clermont, who was a former 1st round QMJHL pick, has had the 'potential' tag next to his name for a few years now.  He likely expected to go earlier in the 2010 draft (I saw some early mocks that year that had him as a late 1st round pick and a 3rd round pick) then he did and I am not sure if that disappointment or an earlyinjury caused his struggles last year. His playoff run redeemed his season and he signed an entry-level-contract with the Devils over the summer.  He is currently on loan from the ECHL Wings to the Albany club right now.  I am not sure why he is still on the AHLroster with both Kinkaid and Jeff Frazee healthy, but I hope he gets some game action in soon.  His first start for Albany was solid with a win in a 28 save effort.

Jeff Frazee, has taken a back seat to the 'youngsters' (Frazee is only 2 years older than Kinkaid) in the organization.  Heis signed with the organization through next year and time is running out for him to justify that second pick the Devils spent on him back in 2007.

The New Jersey Devils have goaltending depth.  They may have to look at a short-term free agent next year if Brodeur decides to retire but I don't believe they have to spend a lot of money (Pekka Rinne) or make a huge trade (Jaroslav Halak) to get their next goalie.  The Cory Schenieder's of the world are nice to look at, but I don't want to pay for them.

So what do you think Devils fans?  Do the Devils need to trade for a goalie of the future or are you happy with the current options in-house?  Think Sova gets the bump back to the AHL soon?  Leave any questions or comments you have that are prospect related below.  Thanks for reading.