Devils Scoring Chance Summary for Game 11 vs the Philadelphia Flyers

Share All sharing options for: Devils Scoring Chance Summary for Game 11 vs the Philadelphia Flyers

The Devils had a very strong game against the Flyers, out-chancing them in all three periods.  They more than doubled the Flyers at even strength with 15 chances to their 7 and led them 16 to 10 total.  The Devils were also very successful in not allowing PP chances, in the over 8 minutes on the PK they only allowed one scoring chance. Unfortunately the Devils PP wasn't able to generate chances either.

The Devils 3rd line was probably the best against the Flyers, each player was atleast a +5 and none of them were on the ice for a chance against.  David Clarkson led the team with a +6 and also had 3 chances on goal. The 1st line also played well.  Zach Parise tied Clarkson with 3 scoring chances and Adam Henrique led the team, along with Sykora, with 3 chance assists. The only forwards to finish negative were Mills and Janssen, each going -1. 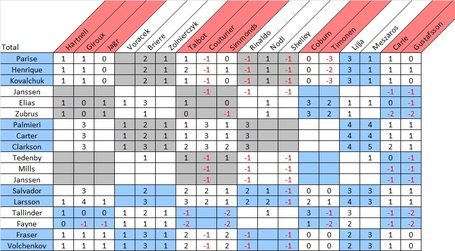