Share All sharing options for: Devils Scoring Chance Summary for Game 10 vs the Toronto Maple Leafs

First off I didn't forget about the Stars game.  I still haven't had a chance to watch the game due a lengthy power outage. I am hoping to get that out in the next few days. Until then check out the Dallas side of that game at Defending Big D.  Once I get that game done I will also be putting out an October review, so look for that in the next week or so.

Before I get to the Leafs game I would like to recommend anyone that is new to scoring chances check out this post first.

The Maple Leafs had a very successful night in not only creating scoring chances but converting them too. They scored on 5 of their 16 total chances, all of which came at even strength.  The Devils did their best to keep up with them, scoring on 3 of their first 9 chances, but it wasn't enough.  In the end the Devils had a total 14 chances, only converting 1 of 11 at even strength.

The most successful forward for the Devils was probably Petr Sykora. He led the team with 3 chances on net and also finished at +2.  Elias was also another Devils that finished positive at +1. Both forwards were on the ice for 6 chances for, which led the team. Tedenby and Clarkson were worst among the forwards at -4, though Clarkson did have 2 chances on goal.

Bryce Salvador was the only defensemen who didn't finish in the red, going +1 on the night. Henrik Tallinder was on the ice for 10 chances against and finished at an awful -6. 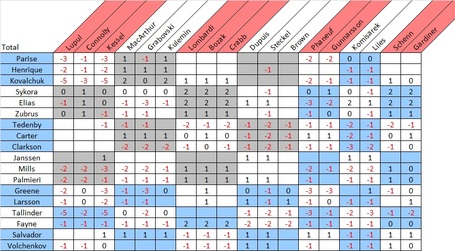