It's prospect update time! After the jump we'll have a Q&A with Ohio State Hockey radio play-by-play announcer Sam Obermyer to get an update on the progress of Devils defensive prospect Curtis Gedig and of course get the updated stats for Devils prospects.  Click the link for more... 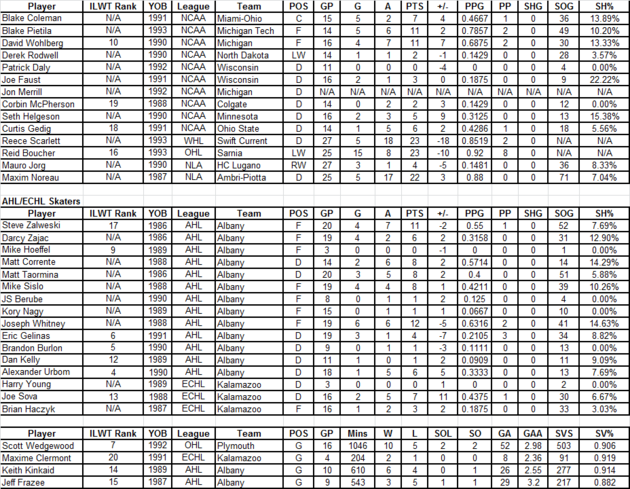 Last year Sam Obermyer, the Ohio State Hockey radio play-by-play announcer, was gracious enough to take some time to answer some questions about defensive prospect Curtis Gedig.  You can take a look at that interview here.  With Ohio State's hockey program on the rise (especially after a two game sweep over Michigan in Yost Arena) I wanted to catch up with Sam, to see how Gedig has been doing.

Sam is also the Assistant Sports Director at www.ohiostatesports.net for The Ohio State University Buckeyes. You can listen to live game feeds on that site, so if you have a few minutes on a Friday or Saturday night you can catch all the live game action.   You can also follow him on Twitter here for any OSU hockey news.

Tom: We last spoke about a year ago about Gedig.  At that time he was well on his way to becoming a top pairing defender on for the Buckeyes, about 10 into his freshman season. To quote you from last year: "It will be interesting to see in what direction new Ohio State head coach Mark Osiecki has Gedig develop" He has played about 40 games since then.  At this point how has his development progressed?

Sam: He has taken a big step forward.  You could tell he was improved by the end of last year, but the jump he made this summer was quite impressive.  For that matter the jump the team made over the summer has been quite impressive.  Gedig has been a fixture on the top defensive pairing with 6 points (1G 5A) in 14 games.  At this point Gedig is not being relied upon as a scoring weapon for the Buckeyes, but he has shown he has the capabilities to contribute to scoring plays and that is an aspect of his game that still may be developing.

Tom: Gedig had a slow start to the season but has seemed to pick up the pace (at least scoring wise) in conference play.  How is he being utilized by Osiecki?  Is he expected to generate offense or is he shutting down the opposition....or both?

Sam: He is being utilized more as a shutdown defenseman, but as I talked about in the first question he is showing signs that he is capable of generating some offense.  Right now the Buckeyes do not need him to be generating to much offense and I think they would rather have him focusing on shutting down the top line of the opposition and in a league with as much talent as the CCHA has this year that is not going to be an easy task.

Tom: Looking through the statistics on the OSU website I noticed an interesting stat about Gedig.  31 blocked shots. He averages about 2.5 blocked shots per game which would put him in the top 10 in the NHL if we carried those stats over. While I am always a bit skeptical about those types of stats because of different rink bias, can you shed some light on this facet of his game?

Sam: While I can't say I ever counted, I would believe the 2.5 blocked shots per game. Playing on the top line he gets a lot of ice time and blocking shots is a significant part of the Buckeyes game.  Personally, I like a player who is always willing to get down and block the shots and the fact that Gedig is willing to put himself into any situation to benefit the team.

Tom: One of the areas Gedig needed to develop was his physical game.  You noted he was probably the tallest defenseman the Buckeyes had, but also the lightest (190 pounds).  He is currently listed on the OSU website at 200 pounds. Have you seen more physical play from Gedig as he matures?

Sam: Gedig has gotten more physical in is play, but he is a smart physical player.  By that I mean he knows how to go about attacking the opposition in a way that is not going hurt his own team.  He does not take unnecessary penalties that hurt the team, and he knows when he needs to be physical and when to let up.  I think this increased physical style of play is partly because he added some weight and partly it just being his second year in the league.

Tom: Final question.........The surprising OSU team is ranked 13th by Inside College Hockey. The team gets a big test this weekend playing the Michigan Wolverines (albeit without Jon Merrill).  Is OSU looking at this game as a measuring stick for the team?  (Note: This question was asked before games were played.  The question was answered after the games were played.)

The two wins this weekend over Michigan were HUGE for this team. Any Buckeye win over Michigan is a reason to celebrate, but these wins showed that this Ohio State team is for real. The Buckeyes are now ranked 9th in the USCHO.com poll and 10th in the USA Today poll. The real test will be to see how they handle being a top ranked team with opponents taking them more seriously.

Also for your viewing pleasure, here is a video of Gedig answering questions from the media after a game. If you are interested in seeing Gedig's first goal for Ohio State you can view it here.  His goal starts at the 1:01 mark of the video.

Other News and Notes:

Jon Merrill continues to serve his suspension and is out indefinetely.  After Michigan's past weekend, I have to think Red Berenson is champing at the bit to get Merrill back into the lineup.  But the wait continues....

Albany took 3 out of a possible 6 points in 3 games over the past weekend. With 23 points they are in the middle of the pack in the Eastern Conference and will likely be fighting for a playoff spot in the spring. Keith Kinkaid got credit for a win and an overtime loss.  Brandon Burlon, due to injuries to both Jay Leach and Matthew Corrente, hasn't lit up the score sheet yet, but is putting a little over a shot per game on net.  If he continues to get consistent playing time, the scoring will follow.

Mike Hoeffel returned this past weekend after dealing with an injury that has kept him out for most of the season.  Watch his progress over the next few months.  If he plays with the right linemates he can help the low scoring Albany team generate some goals.

That's it for this week. I hope you enjoyed hearing a little more information about Gedig.  Thanks for reading.  Now it's your turn...sound off below.  Again, any prospect questions or comments...fire away.