The Last 20 Third Periods of the New Jersey Devils

Share All sharing options for: The Last 20 Third Periods of the New Jersey Devils

We can be thankful of many things on Thanksgiving.   General health, family, friends, possessions, and so forth.  We can also be thankful that we're able to read (or, in my case, write) detailed posts on a blog about our favorite hockey team, the New Jersey Devils.   Additionally, we can be thankful that the Devils are 11-8-1 in spite of their third period performances.

The Devils' third period woes really stuck out during their recent five game road trip.  In four out of the five games, it was clear that the home team was controlling play in the third period. Boston blew the Devils away despite a tight-looking score, it only made the score closer in Buffalo, it gave the Devils a scare in Tampa Bay, and it resulted in a Devils loss in Florida.   Just last night, the Devils took another lead into the third period but the play ended up at one end of the rink so much, Columbus equalized, and the game required overtime and a shootout to get a decision.  Sure, the Devils have a good record with a lead going into the third period. They are 5-1-0 when leading after two periods.  Yet, it's been mostly in spite of their third period performance instead of because of it. 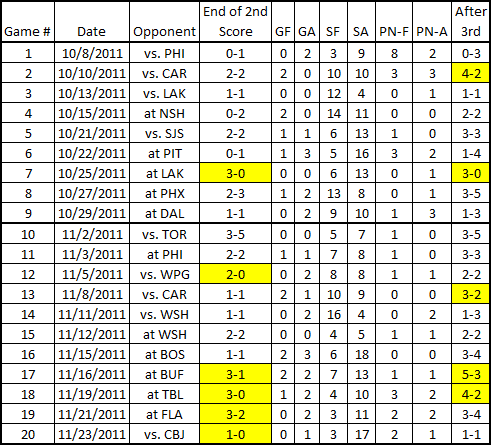 The sum of New Jersey's third periods this season has been 15 goals for and 26 against.  They have put up 151 shots on net while allowing 204.  They've taken 28 penalties while their opponents have only taken 23.   Third periods have been a problem.

There are two mitigating factors to these totals in my view.  First, 8 of those 28 penalties came in that opening night game against Philly where the Devils got dumb while losing 3-0.  Throw that first game out and it's a nicer 20-21 for-against total.  Second, the big disparity in shots is driven by the last 5 games. In those 5 games, the shot differential for New Jersey was -46, a vast majority of their third period shot differential of -53  this season. That tells me that the team's woes are more recent; not necessarily systemic throughout the season.  Moreover, the opposition had been bombing a load shots on net partially because they were losing and needed to get back into the game.   This was certainly the case in the last four games.  Boston did so because, well, they could with their impressive offensive depth.

Nevertheless, the numbers do provide reason to believe that this is a larger problem than just the last two weeks in games.  A big chunk of that goal differential has come from this month.  The Devils have only scored 8 goals while allowing 16 in November.  In addition to the meltdown at Florida and handing Columbus a point, the Devils blew a 2 goal lead to Winnipeg that forced overtime and lost the game to Washington regardless that the Devils actually out-shot them in the third.  Carolina could have stolen a point if it wasn't for Adam Henrique jamming a puck really hard on a wraparound late in the game.   Sure, some of the goals against have been on some bad bounces; but the breakdowns just keep mounting and more and more teams know they can find success in the final 20 minutes of the game.

Also, the Devils have only out-shot opponents twice out of 11 games this month.  One of them was against Carolina where they out-scored them in the third for the only time this month; the other was in that Washington game where the Caps put up 2 in the third period to take the game, so the Devils were just desperate to get back in the game. So only one good third period really has been played this season.   In my opinion, that further justifies that the third period is a bigger problem than just six poor third periods in a row.

It begs the question: Why? Why have the Devils been so poor on offense and porous on defense in the third period?  We've seen it at home, where the Devils have the benefit of the last change.  We've seen it on the road, where opposing coaches exploited match-ups where they could find them.   In my opinion, it's a mixture of coaching and performance.   It falls on the coaches because this team doesn't seem to change their tactics too much when they have a lead.   The Devils like to forecheck hard and have their defensemen pinch in even when they're winning.  While that's fine on paper, it only works if the players are able to generate some offense out of it.  When they're turning the puck over or missing the puck entirely, it just gives the other team more openings to come in and attack.  Peter DeBoer has been pretty good at making adjustments; but he could stand to be less aggressive more often late in the game.

Of course, the coaches aren't the ones out on the ice.  Even if DeBoer's saying all of the right things, it doesn't benefit the team if they're not listening - as evidenced by this Tom Gulitti-reported quote by Ilya Kovalchuk after the Columbus game. That suggests a lack of mental conditioning - not physical.  That wouldn't be so bad as long as the players are aware enough adjust their own game plan.  But they aren't doing that.  Instead, they're making soft plays in their own end. They're reaching for stops on the forecheck and the neutral zone and tend to come up empty.  The backcheckers are not picking up opposing players in the slot at times, and the defensemen aren't always getting the clearances they need - both big problems when the other team is dominating possession. Call it confirmation bias but they have an annoying proclivity blind passes towards the center of the ice at either end of the rink.  They're needlessly fouling the opposition in recent games too.  To sum up, they're losing focus and the opposition are taking advantage.

So the players and coaches both need to make improvements.  In the bigger picture, the team can definitely help themselves by performing better in the first two periods.  The Devils have only led in the game 6 times out of 20 games going into the third period.  While that has improved in recent games, this needs to happen more often. A team that is tied or losing in the third period is in a difficult situation.  Only twice did the Devils enter the third period tied and go on to win it in regulation. Only once were they losing entering the third period and have been tied at regulation.  It's a positive in that regard that the Devils have actually held a lead at all going into the third period in their last four games.  Should the Devils continue to struggle in the third period, then they'll need more substantive leads to act as a more effective buffer. The ideal situation is what we saw in Buffalo, where the Devils were up 3-1, tacked another one on the scoreboard, and so while the Sabres' response was strong but not nearly enough to get themselves out of a metaphorically deep hole.

Likewise, when the Devils are being rolled over on the shot count and in terms of possession, New Jersey needs to make the most out of whatever opportunities they do get.  This means when they get a power play in the third period, they actually have to get some offensive pressure during those two minutes.   The Devils' power play hasn't been effective at scoring goals and even less at setting up and generating shots.    It's improved a little bit in recent games; but more work needs to be done.   A man advantage usually forces the other team focus on defense and this Devils team needs to recognize that.  After all, the Devils haven't been able to do much of that at even strength in recent third periods - so when they get an opportunity, they need to get something out of it.  Two minutes may not be much, but a competent power play can give the defensive players and the goaltender a break.  It goes without saying that goals would be better, though we are talking about the Devils power play here. I'm not that hopeful.

Similarly, if the Devils are able to get an attack up ice, then they need make sure the puck gets on net.  Forcing shots through traffic or pulling them wide can cost the attack as the puck goes loose and can end up on the other team's sticks.  The Devils would be better served in the third period by being more selective with their shots and focus more on actual puck control - especially if they're leading or the opposition is giving them problems.  A missed shot or losing a puck in the offensive zone isn't always a bad thing, but given that the Devils have struggled so mightily in keeping the puck in the third period an adjustment in this regard could be beneficial.

Ultimately, the silver lining is that New Jersey Devils' third period problems are fixable. They're not getting pounded all over the ice in every period in every game and are just fortunate to have 11 wins.  However, if they want to win more often, then they need to address these issues sooner rather than later.   I think adjustments are needed as opposed to wholesale changes to the lineup or the team's tactical philosophy.  Improved backchecking efforts along with less aggressive game plans by themselves can help out a lot. So would an improved power play as well as stronger leads going into the third period.  While you know my opinion and some suggestions, I want to hear yours. What do you think the Devils need to do to improve their third period performances? Please leave your answers in the comments.  Thanks for reading and have a happy Thanksgiving.