It's prospect update time! After the jump we'll look at the 50 man reserve list to see where the Devils stand against the rest of the league, look at one-way deals buried in the minors and of course get the updated stats for Devils prospects.  Click the link for more... 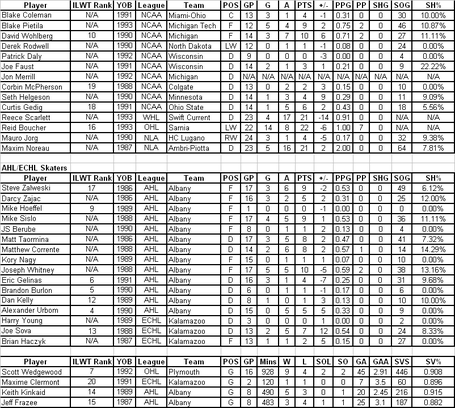 It was a short lived stay at the top of the Northeast Division for Albany as with only one game last week (a 6-5 win over Hershey) they fell back into a three way tie for second place with 20 points.  Our Hated Rivals AHL affiliate, the Connecticut Whale (future home of Brad Richards) currently leads the Northeast Division with 21 points.  Albany plays a three games in three nights set this upcoming Friday, Saturday and Sunday.  Prospect Mike Hoeffel (dreaded 'lower body' injury) has been skating and will likely see some action this weekend after missing 16 games.

A couple of weeks ago in this column, I was less than excited about the prospects of signing Steve Bernier to an NHL contract.  My issue was with the fact that he would take the last spot that the Devils had available on their reserve list.  We've touched upon the reserve list here a few different times over the past months, but I was curious as to how other teams managed their rosters.  How many were close to the max?  How many not even close? 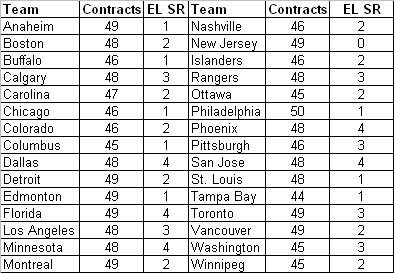 I went through Capgeek.com and looked at each team's reserve list and separated out contracts that would technically not count against the team this year.  The column EL SR represents players under contract with a team but that have contracts that slide.  Remember that entry level contracts that are allowed to slide are 18 or 19 year old players who haven't played 10 games in an NHL season.

Only Philadelphia is at their maximum limit for total contracts.  Thus, if the Flyers want to make a player acquisition they would need to move one of their current contracts off the books.  Tampa Bay has the most spots available with 6.  The NHL-owned Phoenix Coyotes have 48 players under contract with an additional 4 on deals that could slide.  With most deals that are sliding there is going to be some bonus money that is paid out.  While it is not a huge amount (in the case of Phoenix about $300K is being paid out to players who have deals that will slide) but I found it interesting.

This list will be important as the trade deadline approaches.  Contending teams that are looking to deal draft picks to non-contending teams to rent a player for a few months may only have one or two moves available to them without shedding a player off of their roster.  The Devils can currently add one player before hitting the maximum limit of contracts.

The 50 man reserve list does not count in players who teams have rights to.  For example the Devils have draft picks playing in college, (Jon Merrill, David Wohlberg, etc) the CHL (Scott Wedgewood, Reece Scarlett), or other players in foreign leagues (Maxim Noreau, Petr Vrana) that they still technically have rights for.  The limit on total players you can have under contract/rights to is 90.

Money Buried in the Minors

As I looked at the reserve lists of each team I also started to tally one-way contracts that were buried in the AHL or on a team's reserve list.  Results below:

After the demotion of Rostislav Olesz, the Chicago Blackhawks are paying almost $10MM in salary to players not on the active roster.  I suppose that it's ok though because it is in the 'spirit of the CBA'.  Whatever.

That's all for this week.  Please leave any questions or comments below.  Thanks for reading!