Share All sharing options for: How Peter DeBoer Has Used the New Jersey Devils Skaters After 17 Games

As the New Jersey Devils approach the quarter-mark of the 2011-12 regular season, common threads about how the team is coached are starting to form. Given that John MacLean was a contributing factor in the team's dismal 2010-11 season, there were some legitimate concerns about head coach Peter DeBoer. While he has coached in the NHL prior to the Devils, it's not like he had a huge resume of success. Plus, the franchise has a long standing history of going through coaches. With the team missing last season's playoffs, the pressure is on for this season to at least play into mid-April. Today, I'd like to focus on a big aspect of Peter DeBoer's coaching - his utilization of the Devils lineup in games.

Thanks to the invaluable Head to Head Ice Time charts at Time on Ice, it's easier than ever to notice who's been facing who during a game. Over the 17 games the team has played so far, the charts have helped me identify a few of DeBoer's coaching tendencies. He likes to match lines when he has the opportunity to do so. He has preferred to match "power-for-power" both with forwards and defensemen. DeBoer has also tried to protected younger players from the difficult match-ups, regardless of how much ice time they may rack up, with varying amounts of success from game to game. He also likes to have an "enforcer" in line up, which I personally don't like, but that's how it goes.

After viewing this post by Derek Zona at the Copper and Blue and this post by Erik T of Broad Street Hockey, I was inspired to do similar graphs for the Devils forwards and skaters. I feel they are helpful in getting a grasp on how DeBoer has used the Devils' players so far this season. Please continue on after the jump to check out the charts with some appropriate commentary.

The following graphs are "bubble graphs," and the base data came from even strength data at Behind the Net. The two axes are for quality of competition as defined by Corsi Rel QoC, and defensive zone start percentage. The size of the bubble is determined by on-ice Corsi adjusted for zone start. The larger the bubble, the higher the Corsi value is away from zero. Red bubbles indicate negative adjusted Corsi values, which are bad; blue bubbles indicate positive adjusted Corsi values, which are good. Lastly, I've only done these charts for skaters who have played at least 10 games to filter out spot duty or guys who just haven't been playing.

Let's start with the forwards. 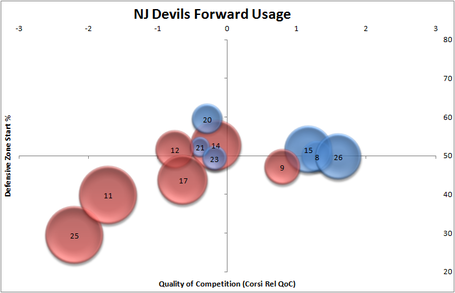 The numbers inside the bubbles are the player's jersey numbers. The first thing to notice is that the Devils are evenly split between positive adjusted Corsi players and negative adjusted Corsi players: six on each side. The second thing to notice is that the negative players stick out a lot more than the positive players. Third, there's only one player just barely in upper-right quadrant, which represents who's taking on the most difficult situations; yet there are four in the lower-left quadrant, which represents the easiest situations. Fourth, outside of Ryan Carter, there aren't too many Devils forwards with a noticeable defensive zone start percentage.

There are four forwards with a higher quality of competition than zero: Patrik Elias (26), Dainius Zubrus (8), Petr Sykora (15), and Zach Parise (9). The Elias line has been the designated "take on the toughs" line at home and on the road should DeBoer be able to get that match-up. DeBoer is correct to continue that usage since all three have been driving the play over this season so far.

Parise is the odd duck of the four because he's on a different line. His linemates have varied throughout the past 17 games, but deep teams and teams hosting the Devils have targeted that Parise line. I think that may be why his quality of competition is higher than other forwards like Nick Palmieri (12), Ilya Kovalchuk (17), and David Clarkson (23). Overall, Parise really hasn't done that well against them either. Parise has been an excellent possession player throughout his career, even in his injury shortened 2010-11 season. It's a real surprise to see him have such a low on-ice and adjusted Corsi values. Hopefully, he can turn it around as the season progresses.

Getting back to positive results, notice the trio of Ryan Carter (20), Clarkson, and Mattias Tedenby (21). All three have also been positive in Corsi. They're not facing difficult competition like the Elias line, so it should be expected as to whether they can win their match-ups. It's not by much, but it's still a plus. The three are all over the place when it comes to zone start. Carter's been utilized in his own end more often than the rest of the forwards; Clarkson is just below 50%, and Tedenby's just above it. This information suggests to me that these three should stay together in future games.

The rest of the forwards look ugly in this regard. As great as Adam Henrique's production has been, he's been beaten on at even strength. Nick Palmieri has been shuffled among the second and third lines, and across both, he hasn't made much of an impact. Ilya Kovalchuk suffers a bit from playing fewer games than most of the group; but I'm not really pleased to see he's been getting the benefit of more offensive zone starts, weaker competition, and he's still deep on the wrong side of Corsi. Kovalchuk's never been much of a possession player, but I really would like him to step up as well. He really shouldn't be down there with the likes of Brad Mills (11) and Cam Janssen (25). The two fourth-liners have been given the easiest in-game situations this season and they're not succeeding in the possession game. In a word: sigh.

The defensemen are more closely packed than the forwards in both quality of competition and defensive zone start percentage. Therefore, I've adjusted the axes ranges accordingly to make the six defensemen stand out on the graph. 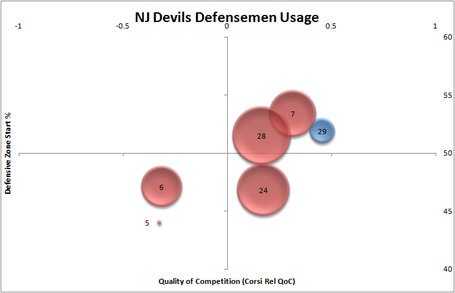 As with before, the numbers in the middle - except for Adam Larsson (5), which is left of his bubble - represent the player's numbers. The defensemen have been used more evenly than the forwards, but to not as much success. The pairing of Henrik Tallinder (7) and Mark Fayne (29) have taken on tougher competition than the rest of the blueline; and they've take more defensive zone starts than the baseline. However, it's not a huge quality of competition gap between them and the pairing of Anton Volchenkov (28) and Bryce Salvador (24). The pairing of Andy Greene (6) and Larsson (5) has definitely been protected, with a relatively lower quality of competition and defensive zone start percentage.

What was unfortunate to find is that only Fayne has come out ahead given his competition and zone starts. In fact, he only comes out ahead after adjusting for zone start as his current on-ice Corsi rate is zero. Larsson is just below zero in adjusted Corsi; hence, his tiny bubble. The rest of the blueline is significantly negative. In other words, the defense is forced to defend more than attack - and that's not good. It's arguable that you want your defensive defensemen to defend, but it just makes games harder for the Devils to win should it continue As much as I like how the pairings have been organized, maybe DeBoer needs to consider a change or two to get the blueline back positive in terms of Corsi.

One last caveat about both charts, since it's still early in the season, a game or two can definitely affect the results. I initially did the defensemen graph prior to the Buffalo game and Larsson and Fayne both had higher, positive adjusted Corsi values. After that game, both players took a hit even though the didn't end too much in the red for possession. It will be fruitful to update these graphs from time to time throughout the season to see what changes.

Still, they both illuminate how DeBoer has been using the Devils skaters. In my opinion, as much as the Henrique line could use the help in possession, I don't want to break up the one line that can take on tough competition and win possession to do it. Similarly, I'd like see to the Tedenby play with Clarkson and Carter for a few games to see if three positive players can maintain or get more positive with more time together. Should DeBoer want to tinker with the lineup, he may want to consider doing it on defense as nearly the entire group is getting beaten in the possession game.

What did you learn from these two graphs? Did this confirm what you thought about how DeBoer uses his players, or did they go against what you thought? Based on these results, what would you like DeBoer to do differently? Please leave your answers and other thoughts on how DeBoer has been utilizing his lineup in games in the comments. Thanks to Derek Zona and Erik T for the inspiration, and thank you for reading.