The New Jersey Devils power play is horrible. The stats tell you it is. The performance and execution of it is. The defense (yeah, the Devils have had to play defense on their power play) is. There's no questioning it. There's no denying it. It's just the simple true. With the players on this team and the coaches on the bench and in the organization - there's no excuse for this. What is wrong with the Devils power play?

Well, there is a lot wrong with it, and we'll get into them. Sixteen games into the season - the Devils stand at 8-7-1. The power play converting at a better rate may and even would have at points changed that. I'm content with their record - but again, knowing who is on this team and what this team can do - it's a major problem this team faces in it's next 16 games, 30 games, 50 games, etc..

The Devils are dead last in conversion rate; tied for second to last in short handed goals against; near the bottom in opportunities; and second to last in power play shots on goal. If you could decline a penalty - I'm sure the Devils would actually consider doing just that. It makes me and most of you sick.

After the jump I will go into detail on some of the problems I have seen at The Rock and on TV for road games. I do have some solutions too. I know I'm not an NHL coach - but these seem like quick fixes to me. Let's get into them.

They have also let up 3 shorthanded goals. Compared to just the six they put up - they are netting 3 goals on the man advantage. Unacceptable; disgusting; put whatever ill-minded word next or even words not even allowed on this site. They haven't drawn many calls either: 24th in the league in opportunities per game (3.44 per game).

The Entry - Remember that new rule when face-offs after a penalty would start in the defensive zone of the team that committed the penalty. Thank every entity for that. The Devils have done a good job of winning faceoffs at first. It's after that first clear and they have to skate back into the zone is the problem. Ilya Kovalchuk has been out the past few games with a hamstring injury - and he was the main puck holder to get into the zone. The problem the past few games is his injury. Getting him back will surely help.

But there's more to that. I hate the dump the chase during the power play. It seldom successful, it takes too much time, and it's an act of "we don't know what else to do." With passers like Adam Larsson, who has shown to throw some magnificent passes at times, and Patrik Elias. Why not make some quick, one-touch passes laterally to skate into the zone? Larsson could make a solid two line pass to the side boards where Elias could sit. As the pass is coming - a Clarkson or Parise could be skating right through the neutral zone to receive the one-touch pass from Elias. It's a simple triangle pass sort of speak. It's one idea - and there are tons more. Why not mix it up?

The Set-Up - Your leading players in terms of ice time are (in no order) Kovalchuk (17), Zach Parise (9), Larsson (5), David Clarkson (23), and Elias (26). This is your first unit. Kovy has been out the past few games with a hamstring injury - but is expected back either tonight are very soon. Here's a quick image of what the set usually consists of when they get set up: 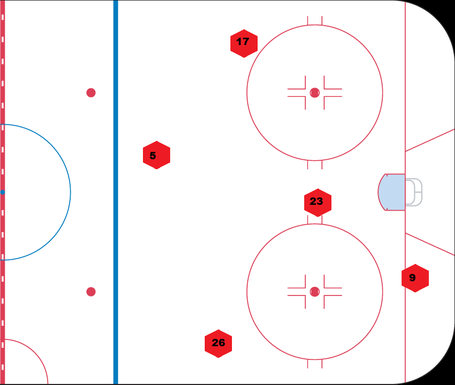 A hybrid umbrella format. I don't mind the set up. But since the power play isn't working - is it time for a personnel change? Does it take 16 games and over 50 opportunities for a 5-man unit to obtain chemistry? They have looked good at times - and it seems they are on the same page; but changing things up wouldn't hurt (you can't get any worse than what the Devils have been doing). What about switching Parise and Clarkson? Parise is known for his dominance around the net. Is it asking too much for Clarkson to fight for position, get the puck and get a shot off in the center of a 4-man box? I think Parise has a better shot at doing this than Clarkson.

The Strategy - What they are doing with the set-up is the main problem. They set up the long shot from the top three point men. Hardly does Parise or Clarkson even get the puck. When Parise does - his options are to stuff the puck from the side of the net, pass back to Elias, or wrap it around. Clarkson is expecting to tip the puck towards the goalie (which he did last night and Thomas made an unbelievable save). The good thing is they give the players options - but the problem is their options lead to nothing significant or lead back to the same set up/try. This means time wastes. How wonder they are averaging 1.23 shots per power play opportunity. 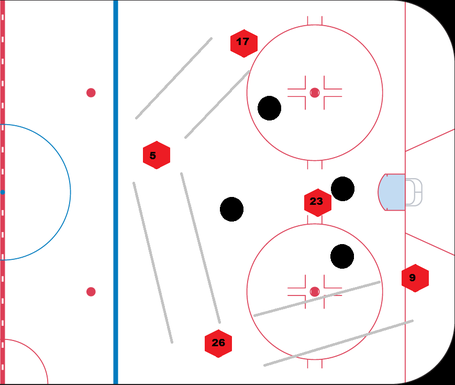 The gray lines are the clear passing lanes. They have been able to get the puck around the three point-men. Parise's position at that sharp angle leads to nothing where everyone else is in this image - which leads me to the main problem:  Move around!!! If you don't have the puck, why not get into a position to get a pass from the person that does. The PK unit are covering pylons. It's simple to cover pylons. Last night's PP where Elias waited, and waited, and waited was just stupid.

Why doesn't Kovalchuk skate closer to the net mouth for a sweet weak-side shot? Maybe Clarkson and Elias quickly switch positions to create some confusion for a one time shot in the slot that will surely create more space. Why not cycle the puck between Parise, Clarkson, and Elias where Parise gets the puck - skates up towards Elias' position, Elias goes to the net, and Clarkson to the boards on the side? It will concentrate the PK to collapse near them, change their assignments quickly and often - a perfect time for Kovy to come down the weak side.

The Sense of Urgency - This is also something that has bothered me. There is a big difference in being calm and poise and being urgent. I feel the Devils are way too calm during their power play. They aren't frazzled - which is surprising since one would think they would be. But they need to attack the PK unit. They aren't urgent with their passes. Their ill-advised shots only come after a sequence of passes where no shooting lanes were present. I think this has to do with everything I stated above. The goals won't just come...you have to create plays and create your own opportunities on the man advantage.

Hopefully - Adam Oates and Pete DeBoer have some tricks up their sleeves. I think the coaches are a big problem as well. They need to consider changing things up, whether it be personnel, strategy, or both. Practicing against the 2nd best PK in the NHL should help, no? I feel looking at film would be a big positive as well.

So Devils fans - what do you see as major problems during the power play? What solutions do you have? What did I mention that you agree or disagree with? Discuss it in the comments. Thanks.