It's prospect update time! After the jump I'll talk about the first place Albany Devils (Yeah!), Curtis Gedig and gloat about #FreeBrandon resulting in Brandon Burlon's insertion into the lineup!  Click the link for more... 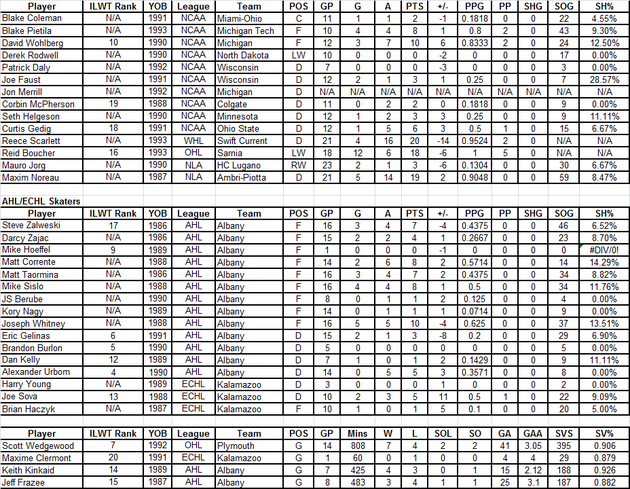 The first place Albany Devils. Let me try that again, with a little more emphasis. THE FIRST PLACE ALBANY DEVILS. After capturing five of the possible six points in the three games over the weekend, Albany currently is alone at the top of the AHL's Northeast Division.  Yes, they have a few games at hand over some of those teams right below them, but let's just revel in the fact that we can say that the Albany Devils are in first place.  Keith Kinkaid started Friday and Sunday and posted a win and a overtime loss. Jeff Frazee got the start on Saturday and pitched a shutout.  Again, it's apparent that Kinkaid is 1A to Frazee's 1B at this point.

Frazee's shutout on Saturday was encouraging. I'd hoped that the addition of Kinkaid and Maxime Clermont would light a fire under him this year. After a rough start to the season he has bounced back nicely and the A-Devs now have a nice goalie tandem to compete with.

The #FreeBrandon meme on Twitter, used by only me on Friday, clearly had it had the desired effect as rookie Brandon Burlon played in the three weekend games. (Of course, it was helpful that Jay Leach was out with an undisclosed injury.)
I am excited Burlon was in the lineup and will ensure that of the games I purchase and watch from AHL Live he will be involved.  I really liked what I saw of him when he played at Michigan last year, and think he was an underrated part of their success last year.

After a visit from special assignment coaches Jacques Lemaire and Jacques Caron (goaltending coach) it is no surprise that the Devils played a more defensive oriented game on Friday and Saturday before letting up 4 goals against the Toronto. (I also found it a nice coincidence that Vladimir Zharkov was the player called up to New Jersey to add some forward depth. I also felt Zharkov was a Lemaire favorite) The visit of goaltending coach Caron resulted in Clermont sticking around Albany for an extra week before he went back to Kalamazoo of the ECHL.  I was curious as to why it took so long for him to be sent down after Kinkaid was returned to Albany.  Caron was the reason.

It's a good news/bad news situation for Reid Boucher and Reece Scarlett in the CHL. Good news? They are both point per game players. Bad News? They are both minus rated players. As discussed on this site numerous times (and what most hockey fans understand) is the fact that plus/minus rating isn't a great statistical evaluator of hockey players. That said, in the junior ranks you both hope and expect NHL prospects to usually have a positive rating. Scarlett plays on a bad team so you can understand why he has been on the ice for so many goals against. Boucher? Yes, he does get a lot of power play points, but it's still a little discouraging that he is one of the few minus players on the Sarnia Sting.  Sarnia has four minus players.  Other than Boucher, the other minus players all have less than 5 points.

It was a weekend of firsts for some NCAA prospects. Defensemen Seth Helgeson and Curtis Gedig notched their first goals in college play over the weekend. Helgeson, a junior and the elder statesmen on a young Golden Gopher defense is a defensive defenseman and his first goal came in game #79. He's like the college version of Anton Volchenkov!

Gedig is probably one of the more interesting prospects in the system. A 7th round pick out of the BCHL (here is a profile I did on him last year) he has good size (6'3 and 220) and is one of the top, if not the top, defenseman on a surprising Buckeye team. I am hoping to catch up with Sam Obermyer, the Ohio State Men's Hockey play by play announcer, for an update on Gedig for an upcoming column.

With the idea of 'interesting prospects' in mind, let me ask you...Who is one of the lesser known prospects that you are excited about?

Thanks for reading and please ask any prospect related questions or leave any comments below.