Even with Albany and the NCAA still in pre-season mode, there is still plenty to talk about.  The big news this week was the suspension of Jon Merrill for 12 games by the University of Michigan for breaking 'team rules'.  I talk about Merrill, Scott Wedgewood and the pre-season juggernaut known as the Albany Devils. 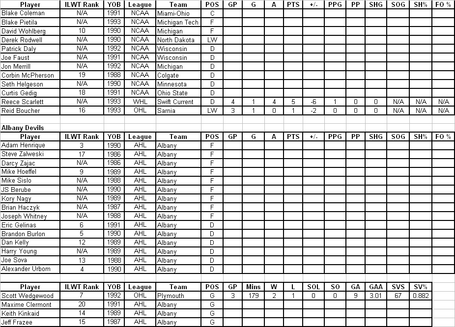 As you can see from the table above, only a few CHL players have accumulated any stats.  Once the Albany/NCAA season starts that table will hopefully be full of stats.  Also, I took Adam Larsson off of the group of Albany players.  He's made the NHL team.

The suspension of Jon Merrill was announced on Saturday.  As of this time, we are still unaware of what transpired that caused the suspension. All we have is this statement by Michigan coach Red Berensen:

"Jon has an obligation to the team and he did not live up to those responsibilities," said Berenson. "He needs to be accountable to his teammates and this program both on the ice, around campus and in the community."

Per Tom Gullitti of Fire & Ice and the Bergen Record we learned that Lou Lamoriello was aware of the situation and supports Michigan's decision:

"I support what the coach did and (Merrill) understands and he’s committed to Michigan and we support that 100 percent," Devils general manager Lou Lamoriello said.

Merrill, if you recall, dropped to the second round of the 2010 draft because of some off-ice issues. Merrill described an off-ice incident that resulted in a suspension from the NTDP program as a 'hazing' type of thing. In his own words:

Additionally, both Allan Muir of Sports Illustrated and Kyle Woodlief of Red Line Report commented last June on how Merrill didn't do well in the interview process and how that dropped him from mid-first round pick to a second round pick.

So there seemed to be some red flags surrounding Merrill that caused many teams to pass on him at the 2010 draft.  The Devils likely looked past these concerns because of where they were picking, his abilities, and the belief that he had learned from his mistakes.  Up until Saturday it looked like they lucked out as Merrill had a superb first season in Ann Arbor.

Now Merrill has a 12 game suspension staring at him. Why was he suspended? No word yet and personally I don't care about the 'why' of this situation. It could be a hundred different things, but whatever it was resulted in a team that lost two of their top defenseman last year (Brandon Burlon, Chad Langlais) to suspend their best defenseman for a good chunk of the season. So let's agree that whatever he did, it wasn't that smart.

The 12 games Merrill missed are a combination of pre-season games and favorable early season matchups. They won't make or break the Wolverine's season. He would be eligible to return to the ice on November 12th for a two game series vs. Miami of Ohio, one of Michigan's top rivals in the CCHA.

So what's next for Merrill? For a player that committed to the Michigan program when he was 14 years old, you would think that he would accept his penalty and play out the season with Michigan.

I wish it were that simple.  But this is the world of hockey, where at one time it seems like 47 different leagues can hold your rights at one time, giving players many options if they are unhappy with their current situation.  Merrill has the option, if he wishes, of going the Major Junior route.

There has been some speculation that Merrill might do this.  His rights are owned by the Plymouth Whalers of the OHL. Because of its proximity to Michigan, Plymouth already has a number of players who actually attend Michigan already, so he could stay in school AND play for Plymouth if he wished.

I think it would be very disappointing to see Merrill take the OHL path. By staying in school, showing his teammates that he is contrite for his actions and becoming a leader on and off the ice he will do more for his development than running off to the OHL. Everyone knows he is a great hockey player, now he just has to show he is mature enough for the NHL.  I don't believe that running away from the suspension is the most prudent choice here.

I can't imagine Lou Lamoriello being happy with that approach either. Having one of his prospects suspended for doing something dumb probably frustrates Lamoriello enough, but if that prospect decided to not face his suspension and leave his team? Hide all the jelly jars in the area.

If Merrill chose the OHL, (unless he had the blessing from Lamoriello) I would highly doubt he ever puts on a Devils uniform.

Don't forget either that while he can play in the AHL at age 18/19 (because of being drafted via the USHL/NTDP) the Devils have no obligation to sign him, per the CBA, until August 15th of 2014.

Also remember, at least for this year, the Devils are pushing the limits of total contracts that NHL teams are allowed to have.  They currently sit at 48 right now. Assuming one of the players currently in camp as a try-out gets a contract, you will want to keep that last slot open for a possible addition at the trade deadline and/or a college free agent signee.

This is a great opportunity for Jon Merrill to show that he understands the importance of off-ice activity and being a good teammate.  I hope he stays the course at Michigan.

Take a look at this fantastic save by Scott Wedgewood from a Plymouth game played on 09/24 here.

AnnArbor.com provides a profile into Michigan senior David Wohlberg.  The quote that stood out to me most in the article was provided by Michigan goaltender Shawn Hunwick:

"Getting him back in is huge," Hunwick said. "He's our leading man up front and he's someone everyone should be following.

"He plays with an edge. He's physical, he's mean, he's pretty much everything we need up front."

Don't look now but the Albany Devils are red-hot, turning the ice to steam!  They finish the pre-season 2-0-1.  The game vs. the Portland Pirates ended in a 2-2 tie after the second period due to ice issues. Albany has their first real game of the season Saturday.

Mike Sislo had a goal and three assists to lead the team in pre-season points.  Albany had also been giving up a lot of shots/power play opportunities to their pre-season opponents.  Let's hope that doesn't continue into the regular season.

So what do you think about Merrill suspension?  Should Devils fans be worried?