Devils Scoring Chance Summary for Game 8 vs the Phoenix Coyotes

Share All sharing options for: Devils Scoring Chance Summary for Game 8 vs the Phoenix Coyotes

The Coyotes were able to get into the scoring area early against the Devils. Getting off 6 scoring chances in the first 10 minutes of the game.  It never really got any better for the Devils as they got out-chanced 13-5 through 2 periods.  They were able to stay even in the 3rd matching the Coyotes 4 chances.  In the end Coyotes scored 3 goals off their 17 total chances and the Devils put home 2 of their 9 chances.

Overall no one really had a good game for the Devils.  The line of Sykora, Elias, and Zubrus did well in preventing chances, only allowing 1 but also were unable to generate a single chance of their own.  Elias did get a chance on goal while short handed though.  Adam Henrique was probably the best forward for the Devils. He finished +1, set up a chance and also had a chance of his own. David Clarkson also had a decent night getting 2 chances on goal.  Zach Parise managed 2 chances as well but ended up -3, which was worse on the team. 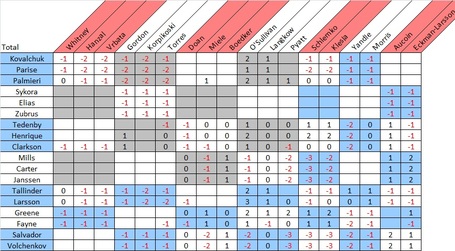