Share All sharing options for: Video Review: Patrik Elias' Goal Vs Kings on 10/25/11

The New Jersey Devils played their best game of the season so far in a game against the Kings last night in Los Angeles. Here is Kevin's recap of the game in which discipline, passing, and offensive pressure improved. C.J has the scoring chances up - where the Devils out-chanced the Kings two-fold at even strength. One of the benefits were the new lines created with Zach Parise playing center with Ilya Kovalchuk to his left. The 2nd and 3rd lines were really clicking - yet one line scored all three goals: The Petr Sykora - Patrik Elias - Dainius Zubrus line.

The one goal in particular that impressed me and most of Devils Army watching was the Patrik Elias goal. A beautiful tic-tac-toe play after a failed 3-on-2. The Devils didn't give up on the play, and a great check by Zubrus (who had the other two goals in the game) kept the play alive. Let's go to the tape!

Here is the video:

Let's go to the first image: 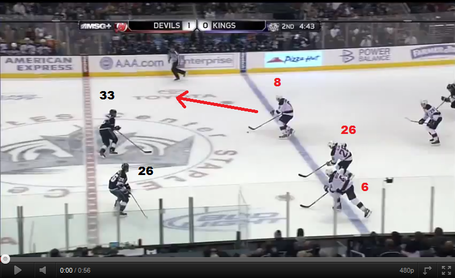 Andy Greene obtained possession in the defensive zone and quickly fed it to Zubrus for a 3-on-2. Elias and Greene are to his right. Zubrus heads to the side boards and so the Devils spread out evenly to make it harder for the two Kings defenders: Willie Mitchell (33) and Slava Voynov (26). 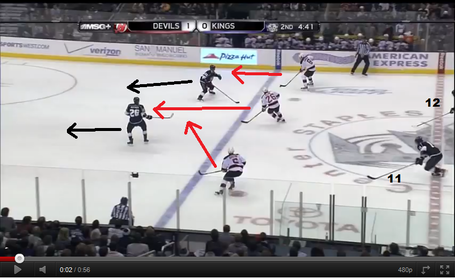 As the Devils enter the zone, both Mitchell and Voynov need to be conservative. They are trying their best to square up between the three Devils. Elias will rush between them and Greene will make the smart move to cut into the slot area. Mitchell has to skate back and block the pass lane to Elias. Notice that Voynov is looking at Zubrus and not the play, so he doesn't see Greene's initial move. Anze Kopitar (11) and Simon Gagne (12) also enter the picture and are skating back to join the play. 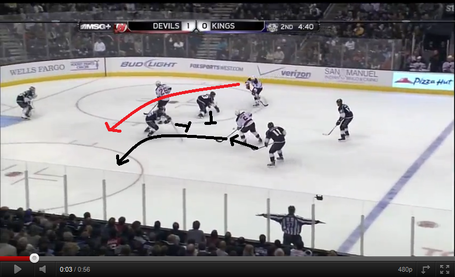 Zubrus feeds Greene and he is quickly gobbled up by three Kings. Mitchell went to play the block first. I think Voynov's reaction is important here as he just notices Greene and makes a nice poke-check. Kopitar gets the puck out of all of this and tries to start a Kings offensive rush. Something makes him just stop in the near circle, though. Zubrus continues to skate through the slot and realizes Kopitar is vulnerable. 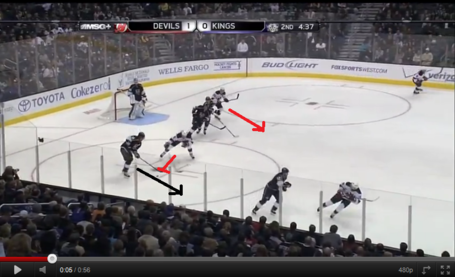 I don't know if Kopitar hit a rough spot on the ice or the puck was escaping his stick. Either way, Zubrus takes full advantage with his long reach and just straight up steals the puck. Voynov comes to aid Kopitar.  Gagne thinks all is alright (Sykora follows suit who enters the screen - bottom right). Greene heads back to the neutral zone. Elias also gets into a good position. 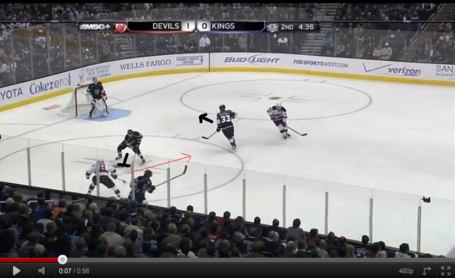 A number of players go off screen, thinking the play was in transition. Zubrus' forecheck pays off and he makes a swift move to obtain the puck and keep it away from Voynov. Mitchell makes a strange move and goes towards the net, leaving Elias open, who is now in a great position in between the circles. The light red line represents the pass from Zubrus to Elias. 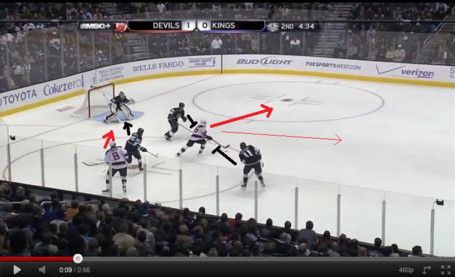 Elias has the puck now, Kopitar and Mitchell both engage him, and Zubrus and Voynov both head to the net. Elias has some great stick handling - and he calmly gets through both Kings. Both Greene and Sykora are about to enter the zone. Elias makes the pass up to set up what will be the goal. 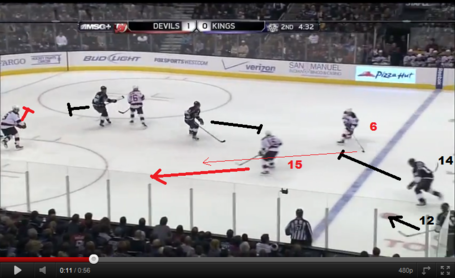 Greene accepts the pass and he will quickly be defended by both Kopitar and Justin Williams (14), who enters the view.  Gagne is also in the bottom right corner . Mitchell notices Zubrus is about to skate through the slot and is behind Voynov; thus, he sits back. This leaves Elias open in the far circle, who turns around quickly. Sykora is looking at Greene the whole time, he knows he'll be getting a pass soon. His stick is on the ice, too. This is a veteran move and shows some great hockey smarts. He will skate to the near circle, where there is a lot of space. Also, note that Elias and Zubrus are looking at the play/puck. 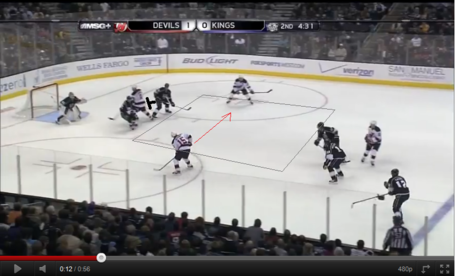 Since Kopitar went up ice to attack Greene, the area between the Kings defense and forwards is huge. Zubrus attracts both Mitchell and Voynov and this leaves Elias wide open. He's wound up and ready to receive the pass for a one-timer. What's even worse is that Mitchell thinks the pass is going to Zubrus and he lifts Zubie's stick in the process. The Devils were attacking the net all game up to this point and I think it got to his head. Voynov has Zubrus covered, so why leave Elias open? Probably because he's Willie Mitchell. 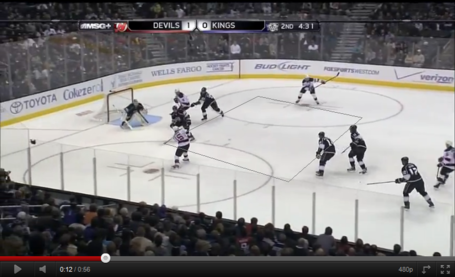 The puck is right in between the hash marks. Mitchell has a successful stick lift on the wrong player. Voynov also has that pass lane to Zubrus covered. In all of this, Jonathan Bernier is slightly more out of his net - he thought a shot would come from Sykora. We all know what happens next: 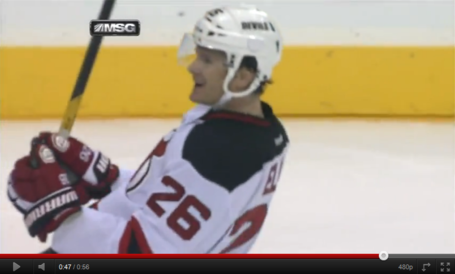 The Devils quickly got off to a great start in this play. They got the 3-on-2. They had the right idea. The Kings made a good defensive play and takeaway to negate it. Zubrus was a mad-man last night and his play to steal the puck from Kopitar was the play that created the goal. After the turnover, the Kings got a little frazzled. Two players go after the same puck holder (or player near the net) and this creates a lot of space. The puck handling from Zubrus and Elias to get the play back to the point was also key. Then it was Greene to Sykora to Elias - a great tic-tac-toe play.

So, what do you think about the goal? What did you notice in the video? They play the angle from the behind the net after Elias scores and it shows a little more than what I described. Thanks for reading.