Share All sharing options for: Devils Scoring Chance Summary for Game 7 vs the Los Angeles Kings

The Devils started strong against the Kings out chancing them 6-2 in the 1st and didn't let up for the rest of the game.  They out chanced their opponents all three periods and finished the game with a 17-7 advantage in chances.  The Kings even got out chanced on their one PP oppurtunity. The Devils did struggle slightly at getting their chances on goal. They missed 5 of their chances, 2 of those did hit the post though. In total the Devils scored on 3 of their 12 chances on goal.

The newly made 2nd line led among the forwards as they all finished the game at +3.  Elias, Zubrus and Sykora were all on the ice for 3 chances for and none against. Also all 3 of their chances resulted in goals.  Tedenby and Clarkson also ended up +3.  Henrique and Parise tied for the team lead in chances with 4 apiece but they both missed the net twice.  Parise also led the team with 3 chance assists and Kovalchuk led with 3 chances on goal.

Mark Fayne was separated from his usual defensive partner Tallinder but that didn't faze him.  He led the team at +8 and his new partner Andy Greene was +6.  The other new pair didn't have the same success as Larsson finished -2 and Tallinder was even. 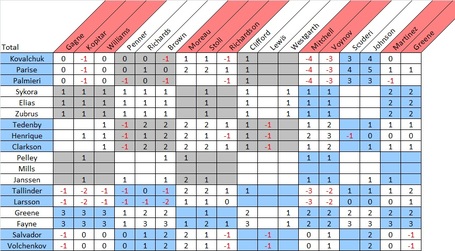