Share All sharing options for: Zubrus And Moose Power Devils to A 3-0 Win Over the LA Kings

After Saturday's stinker vs the Pens, the Devils had to regroup for the west coast swing. And boy, did they do that. While the Devils did have the luxury of not having to deal with Jonathan Quick as well as the injured Drew Doughty, the Devils put on a good performance against an early season favourite to make a statement. The Devils were great tonight, playing all 60 minutes as well as doing a lot of things right. More thoughts on the game after the jump, and game info and highlights in the morning.

For a viewpoint from the opposition, check Jewels from the Crown or The Royal Half for their thoughts on tonight's game.

The 'Berg is the Word

First off, I'd like to highlight Johan Hedberg's performance tonight. If it wasn't for Moose, the Devils would not have been in this game. He made 31 stops, and several huge stops on some of the Kings top offensive threats, namely one Anze Kopitar to prevent the Kings from getting some momentum.

Center of Attention... Well, not so much

Zach Parise was moved to center at practise and started the game at center, between Ilya Kovalchuk and Nick Palmieri on the top line. The results were pretty mixed- Parise was able to win his faceoffs (9/14) and got three shots, while Kovalchuk got 4 shots and almost scored on Bernier. Nick Palmieri often looked like a spectator and took a penalty on Dustin Brown (which kind of looked like a dive to me). The question is, does Palmieri get another chance or will he be demoted?

While Parise's line was kept off the scoresheet, the damage was done from the other lines. The Kings 3rd line was completely dominated by the line of Adam Henrique, Mattias Tedenby and David Clarkson. Despite not scoring a goal, they were consistent, bringing it all game. Henrique was everywhere, and Clarkson had a great game, almost scoring twice. The line with the scorers, the Dainius Zubrus-Patrik Elias-Petr Sykora line was somewhat invisible in the first, but came alive in the 2nd with all three of the Devils goals tonight. Zubrus drove hard to the net and scored the game winner, while Elias' first goal was incredible and Zubrus went top cheese for his second of the night. While they had to get a goal that involved getting dirty, the other two goals were awesome.

The Devils only took one penalty tonight- and while it was a somewhat questionable one in terms of the player drawing it, the Devils kept their emotions in check and played smart. Of course, look at how it affected some players. Clarkson was on top of his game tonight because he was more focused on getting the puck in the Kings net instead of trying to fight Ethan Moreau. 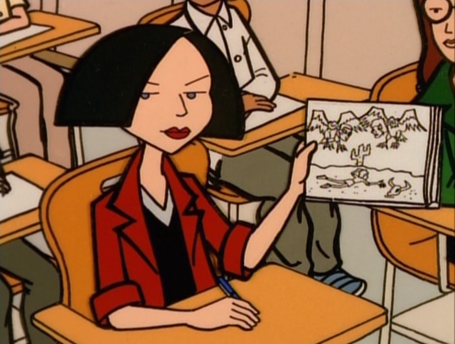 (Well, who else but the smuggest cartoon character I could think of, Jane Lane to headline this section)

Okay, so I talked about Bernier a few hours ago, and i'm going to do it again. He made 20 saves, gave up 3 goals, got bailed out by the post twice and got a goal against disallowed. He might have only given up 3 goals, but he let 6 past him. He's not worth an all star forward. Heck, trading Vladimir Zharkov for him would be an insult.

- The Switches on Defense worked quite well. Greene and Fayne were solid and Greene notched two assists. Larsson and Tallinder were solid, and while they didn't contribute offensively, they were able to do their job of shutting down the Kings top forwards.

- The Last time the Kings and Devils faced off, the Kings scored an early goal off a bad Devils line change. Late in the first period, the Kings almost did that, but Henrik Tallinder didn't change and instead thwarted a chance by a King driving to the net.

- The Devils did something they haven't done in the previous six games- play all 60 minutes. They were in the game from start to finish- they out chanced the Kings, they outscored the Kings and they beat the Kings on their own court.

- The Kings faithful decided to boo Ilya Kovalchuk tonight. While he didn't score on them, he can at least exit the Staples Center all smug because the Devils won.

- David Clarkson doesn't suck. There, I said it.

- The 4th line weren't that great, but they didn't suck when they were on the ice. They didn't make any mistakes, except for getting pinned in their own zone in the 2nd period.

- Patrik Elias: He's still got it.

- Adam Henrique impressed me alot tonight. He was everywhere and being physical. While he has limited experience at the NHL level, if he continues to play like this with Zajac and Josefson injured, he can potentially secure himself a roster spot like Fayne and Palmieri did last season.

- Boy, ti feels great actually winning by three goals for once. All these close nail-biters are annoying.

With that being said, what did you think of the Devils tonight. Do you think they can bring it like they did tonight against Phoenix and Dallas? Thanks for reading, and good night.