Devils Scoring Chance Summary for Game 6 vs the Pittsburgh Penguins

Share All sharing options for: Devils Scoring Chance Summary for Game 6 vs the Pittsburgh Penguins

Even though the Devils lost decisively to the Penguins 4-1 they still managed to out chance the Pens 9-7 at even strength.  The Devils PK was fairly successful, they did give up a goal but only allowed 5 chances in almost 7 minutes. They also had a chance and goal of their own. Overall it was a pretty bland game for the Devils.  They managed to stay fairly even with Pittsburgh but couldn't convert on their chances like their opponents.

Looking at the numbers Kovalchuk is really the only one that stands out.  He didn't have any scoring chances but set up 3 and finished at +4 at ES. Elias and Zubrus managed two chances a piece. Cam Janssen somehow ended up +2. I'd also like to point out the fact that Jordan Staal was involved in 8 of Pittsburgh's 12 chances. That is pretty impressive.

None of the defensemen really stood out this game. Larsson and Tallinder both managed a chance on goal. Mark Fayne led among the defense at +2.

Continue after the jump for all the table and graphs. 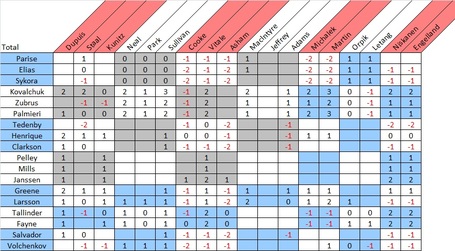