Share All sharing options for: Devils Scoring Chance Summary for Game 5 vs the San Jose Sharks

The Devils struggled to create scoring chances against the Sharks, only managing 4 total at even strength.  They didn't get their first ES chance until Palmieri put one off the post early in the second period.  The Devils also had trouble preventing scoring chances allowing the Sharks to get 11 at ES and 18 total.

The only bright spot on the Devils was David Clarkson.  He only finished the game at a +1 but he had 4 total chances and put 3 of them on net. Larsson, Greene, and Zubrus also managed to be +1.

Patrik Elias and Zach Parise had another rough night against a team's top line. They each got a -5 at ES. They did do well on special teams though. Elias put home a scoring chance on the the PP and Parise managed to earn a penalty shot while short handed.

The Volchenkov/Salvador pairing was the main victim of San Jose's wrath. Volchenkov was not only on the ice for 7 ES chances but also 6 of 7 short handed chances.  That means he was on the ice for 13 of the Sharks 18 total chances. 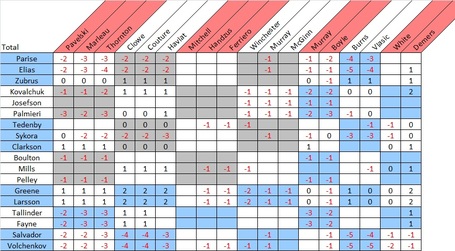