Share All sharing options for: Early Season Analysis of Time on Ice for the New Jersey Devils

It's a mere four games into the 82 game schedule and the Devils are already showing the hockey world that they won't be kept out of the playoffs two years in a row.  Although the season is young, there is much to talk about and analyze.  I was thinking about the quick start that Zach Parise and Ilya Kovalchuk are off to and wondered if this may be because of the ice time they are receiving over the other players, or if they really are starting the season in the zone.

Thanks to websites like www.behindthenet.ca and www.hockey-reference.com, hockey fanatics can make a few clicks and have a plethora of data available.  I'm going to take a look at who is spending the most time on the ice so far this season, and if they're making the most out of that time.

First off I will talk about a workhorse named Ilya Kovalchuk.  Kovalchuk is 13th in TOI/60, the next closest forward is Jarome Iginla at 38th.  I would be worried Kovalchuk is getting a little winded, but apparently that's not the case.  However, I believe his average ice time will drop as the season pushes forward if we want him to not fall asleep during 2nd period intermission.  That being said Kovalchuk has 1.68 points per game and has a relative corsi of about zero, which is OK with me because the Devils have only played four games this season. 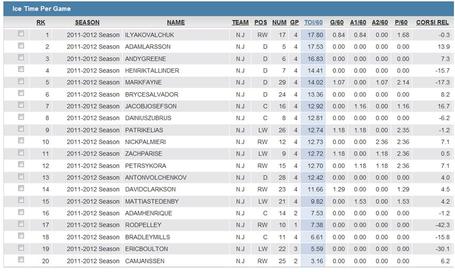 Looking at the chart above from behindthenet.ca we can see all the players at even strength, sorted by time on ice per game, from highest to lowest.  Coming in a close second to Kovy in ice time is Adam Larsson, who is actually 21st in the league in average ice time.  Larsson has yet to record his first NHL point, but he is putting up massive minutes and has a corsi of 13.9. That is not shabby for a rookie defenseman playing these kinds of minutes. It is early in the season and the sample size is small, so some of these corsi numbers will be exaggerated. The third man in TOI for the Devils is Andy Greene with about a minute less than Larsson, and a slightly lower corsi (7.3).  I expect Greene to start taking minutes from Larsson once we get into late November because he has proven he can handle those minutes.  The Devils also need to give Larsson a little time to develop before they run him ragged.

After the top three in ice time there is a decrease of about two minutes and then there is Henrik Tallinder and Mark Fayne, each with a corsi lower than -15, again these numbers could be over exaggerated due to the small number of minutes played in the season.  I can't say I don't agree with the numbers though, neither player has been consistent through four games.

The next set of forwards have all had around 12 minutes of ice time per game.   They are Josefson, Zubrus, Elias, Palmieri, Parise, and Sykora.  Only Zubrus and Elias had negative corsis for that group, while Josefson had the highest with a 16.7.

I'll include the 5v4 and 4v5 charts, but I don't think they are very conclusive given the small amount of total ice time on the power play and penalty kill. On the man advantage, Kovalchuk, Larsson, Parise, Elias, and Clarkson all have significant time and large corsis, mostly above 50.

On the penalty kill we see Bryce Salvador and Anton Volchenkov are the only players who average more than three or more minutes on the penalty kill.  The Devils have a penalty kill that has gone 1 and 17, with plenty of great defense from this pair.  One thing that sticks out on this chart is the corsi of Dainius Zubrus, -124, which is overstated, but still shows Zubrus is struggling a little early in the season.

The final chart is just for those who want to see the total time on ice so far and the average time on ice for each player, through four games.

In my opinion, the Devils are giving their best players most of the ice time.  Baring goalies, the top five skaters in time on ice were Kovalchuk, Larsson, Parise, Elias, and Greene. Greene and Larsson are having a good start to the season while Kovalchuk, Parise, and Elias are putting up early season points.

What do you think about the splits in ice time? Are the better players getting the right amount of ice time? Any players that you believe should be getting more ice time?