Share All sharing options for: A Look at Zone Starts and Finishes for the New Jersey Devils

Yesterday, Kevin took a look at David Clarkson's zone starts over the past few seasons. As the story came up, I laughed - since I too was working on zone start data for today. So I guess we have a nice little theme going on during the Devils five-day hiatus. Anyway...

I thought now would be a good time to look at the zone starts and zone finishes for the New Jersey Devils so far this season. Sure, it's only a few games into the season and there isn't much data, but with a new coach, new players, and new lines - it good to understand early in the season where players will be starting there shifts at a faceoff and where they end up at a stoppage. Combining this information can conclude a number of things: One, if a certain player is moving the puck in the right direction more than not. Two, If certain lines are starting is disadvantageous areas. Three, what lines and pairings are considered more defensive than some (and vice versa) under DeBoer.

I obtained the zone starts from timeonice.com. You can get shift charts, Corsi, Fenwick, and zone starts from them (all you need is the game number - zone start faceoffs example). I got the zone finishes from behindthenet.ca - they have tons of advanced statistics including zone starts. However, they only have information for the first three Devils games. When they get the 4th game in sometime today, I'll update it. Also, these are at 5-on-5.

[UPDATED: Behind the Net has the data up from last game...h/t Triumph44] 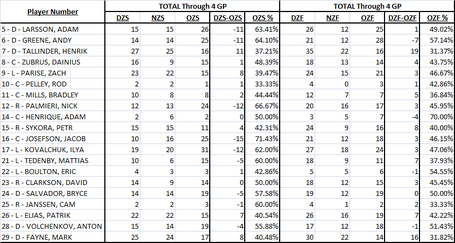 The Andy Greene and Adam Larsson pairing is getting a lot of offensive zone starts. Over 63%, or about 11 more starts in the offensive zone. This shouldn't surprise you since both are offensive minded players who can shoot and pass the puck. I had a good feeling when DeBoer put this and the rest of the pairings together. This gives the Devils offense some much needed help at the blue line yet at the same time, it protects Larsson. He's able to do what he does best in the best zone. As an 18 year old rookie, this is a very smart move by DeBoer.

They do get pushed back into their own zone however. My theory would be they are on longer than most forwards and a dump in is needed for a change, thus possession changing. Another is they get the opposing team's best players. What's good is Greene and Larsson have been very good in transition defense. Both players aren't slow at all and they have shown so far that they are smart. I've been keeping a close eye on Larsson during these situations and he's very good one-on-one when a player enters the zone. He uses his stick very well and always knows when to attack the puck handler. I guess this is my weekly pro-Larsson portion - let's hope we get used to it.

If you thought the Bryce Salvador and Anton Volchenkov pairing was the shutdown pair, well that may be right in a way. They actually start in the offensive zone more than not, each around 56%. What's even more strange is their zone finishes are even higher than that! They have the highest OZF% of any player who has played in every game. This pairing gets the 2nd best competition, yet the worst teammates. It's pretty astonishing they are able to move the puck in the right direction. That's just stellar defense. They have not been on the ice for a goal against at 5-on-5. Salvador has been getting more and more into his groove after missing last season. It's really nice to have him back.

The pairing that has been getting the roughest work is Mark Fayne and Henrik Tallinder. Each under 41% in offensive zone starts is not easy, and they get pushed back to under 30% offensive zone finish. What scares me a bit is they get the worst competition (only pair with negative QualComp), and fair teammates. Are the starts to blame? I would hope so. Tallinder hasn't showed me much this season - and that gaffe against Carolina still kind of bothers me (I know..get it over Matt). I would have thought that last year's arguably best pairing would be able to move the puck in up ice against such weak competition.

The Zach Parise, Patrik Elias and Petr Sykora line is best in terms of Corsi, yet they start in the offensive zone only around 40%. Both Parise and Elias are good defensively and hard working and that means Corsi machines and moving the puck in the right direction. They finish slightly more in the offensive zone (between 40% and 48%). Other teams have to worry about them, which is a great line to have. Sykora is a good compliment player for them as well and they protect him in a way (though that may not last too long). I don't know how I feel about moving Dainius Zubrus here. In the next paragraph, I explain.

The Ilya Kovalchuk, Jacob Josefson, Nick Palmieri line is heavily protected. They aren't the best defensive players and when they lose possession of the puck, the puck goes quickly the other way. This shouldn't surprise you since two players are coming off their rookie seasons and Kovalchuk is, well Kovalchuk. Their offensive zone finish drops to around 43%. Their Corsi numbers aren't very good either. I can see this being a problem against very deep teams. Hopefully Zajac's rehab is going well.

This is where Zubrus should be in my opinion. He can play better defense than Josefson and can help Kovy and Palms when possession is against them. Also, this would be a very big line - and the physicality in Zuburs and Palmieri can create more space for Kovy. It may lead DeBoer into giving the 2nd line less offensive zone starts (and giving the 3rd more, which would benefit Clarkson and Tedenby). This is where Zajac is heavily missed from a standpoint of zone starts.

Clarkson, Mattias Tedenby and Zubrus have mixed numbers. Tedenby is protected and getting 60% offensive zone starts. He's got the 4th best Corsi on the team (among real players), yet like the 2nd line, he gets pushed back to under 50% zone finish. Would he be better protected with players like Parise and Elias? Zubrus and Clarkson both have positive offensive zone finishes. Perhaps throwing Sykora on that line will hinder that? I'd rather this new line get a few more offensive zone starts.

As for the 4th line members, all except Cam Janssen have very low offensive start %. Adam Henrique move the puck up ice with a 70% zone finish % in his two games. I hope he comes back. Same goes for Eric Boulton. Just note, becuase most of these guys have played one or two games, there is much data here. DeBoer does trust these guys more than I thought considering Bradley Mills and Boulton start more in the defensive zone.

Overall, I think DeBoer has utilized his lines very well in terms in zone starts. He best line can start anywhere and make things happen, his 2nd line is strictly for offensive zone starts and his 3rd and 4th are mixed (yet their zone finishes suggest they are playing well). When Zajac returns, he may have two two lines that can start anywhere - which would the 3rd line more offensive starts and protect his 4th line a little more.

As for defense, his pairings are solid. They make sense logically (two offensive players, two defensive players, and two mixed) and it's worked out so far. I feel bad for Mark Fraser in a way, becuase at this rate, he'll never get a game in.

So what do you think about the zone starts and finishes so far this season? How has DeBoer utilized his pairings and lines in terms in zone starts? Thanks for reading.