As the college, junior and AHL schedules are in full season mode, which give us a lot of statistics to update and other items to discuss. After the jump I highlight some of the action from the past week, and talk about Keith Kinkaid's call-up, Jon Merrill's soap opera of a suspension, Reid Boucher's goal scoring and more! 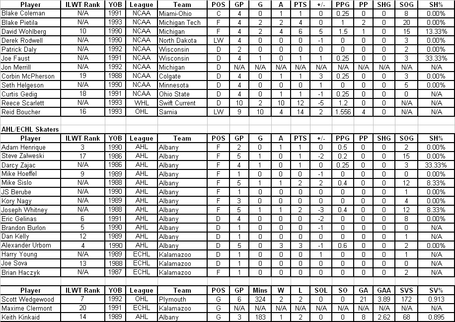 Albany suffered through another tough weekend, dropping two of three games to start the season at 1-4. The only notable occurrence of the past week was what looks like Keith Kinkaid's ascension to the '1A' role in Albany. Martin Brodeur's shoulder injury necessitated a call up and it was Kinkaid who was summoned to Nashville to backup Johan Hedberg on Saturday night, not Jeff Frazee.

Perhaps Kinkaid was called up just because Frazee was scheduled to start Saturday anyway. But after Frazee was torched for six goals on Saturday night against the Worcester Sharks, Kinkaid seems like he has quickly leapfrogged Frazee on the organization's goaltending depth chart.  Kinkaid is only two years younger than Frazee, so the fact that he is a technically a 'rookie' won't stop the organization from fast tracking his development.

With a long gap in the schedule, and the need to insert the likes of Eric Boulton and Cam Janssen into the lineup, the Devils sent forward Adam Henrique down to Albany to get some playing time as opposed to sitting in the press box.

Earlier in the week defensemen Joe Sova and Harry Young were assigned to Kalamazoo of the ECHL in order for them to get some playing time. I was surprised a bit by the assignments. Young is someone who will drop the gloves and provide some toughness which Albany currently lacks. Sova, who played in a few games last year after leaving college early to sign with the Devils, did have some developing to do in the AHL, but didn't seem to need any time in the ECHL. That said,   with Matt Corrrente, Matt Taormina, Jay Leach and Peter Harrold all occupying the Albany blue-line there was little opportunity for him to play right now. Injuries will likely bring him back to Albany sooner rather than later.

2011 4th round pick Reid Boucher is lighting up the OHL with 10 goals (two hat tricks). Before we all get ahead of ourselves it's important to note that he plays on a really good team and with his age and experience you shouldn't be surprised at his performance.  I am still not sold on the OHL being the best development path for Boucher (we knew he had a great shot, that wasn't a question) and hope the Devils get him some time in the AHL this year and next to help push his progress along.

It was a full slate of NCAA games this weekend and one player who stood out to me was 2011 5th round draft pick Blake Pietila. The Michigan Tech freshman didn't add any goals to his stat line this week, but he has put up 20 shots in his four games, a really good total for a true freshman in the WCHA. He has helped set-up a few goals for his teammates and the scouting report on him by Kirk Luedeke that he' brings a very high compete level and outstanding overall feel for the game', seems to be holding true.

Jon Merrill continues to sit out for the Michigan Wolverines while he serves his twelve game suspension. Over the past week, some ominous quotes from Red Bersenson about Merrill came up via Michael Spaeth from TheWolverine.com:

Sophomore defenseman Jon Merrill is eligible to return to practice this week after he was suspended for a violation of team rules Sept. 24. However, it doesn't sound like he will rejoin the team anytime soon.

"There is a point in the policy where he's allowed anytime after the first two weeks and right now we're debating that," said Berenson.

A 2010 second-round selection of the New Jersey Devils, Merrill was an all-conference second-team selection in 2011 after contributing seven goals and 18 assists with a plus/minus of plus-11.

As his suspension drags on, his potential as a flight risk escalates, but Berenson will not bow to that pressure just to reinstate him.

"I don't worry about it but it's part of the situation," he said. "Any time a kid is suspended or hurt or even benched, he can quit or if he's good enough he can leave and play junior hockey or sign a pro contract.

"Is that a possibility? Yeah. Do I think it will happen? No. But Jon is in a situation he has to get out of.

Adding more fuel to the fire about a potential departure to the OHL's Plymouth Whalers was a tweet over the weekend by BlueChipBulletin.com editor Thomas Wharry here that stated that Merrill was in attendance at a Plymouth game over the weekend.

It sounds more and more like Merrill may not return to the Wolverines.  If he does jump ship I will predict that Lou Lamoriello promptly trades him for $0.35 cents on the dollar.

Thanks for reading and sound off below on Merrill, Pietila or anything else prospect related.