Despite trailing most of the game the Devils did a good job of limiting Nashville's scoring chances.  They held them to 4 or less chances each period and less than 3 chances per period as even strength.  The Devils had a total of 17 scoring chances but thanks to Pekka Rinne only managed to score on one.  Nashville had 11 total chances and converted on 2.

Ilya Kovalchuk finished the night +4 at even strength, along with his linemates Josefson and Palmieri.  Kovalchuk had 3 chances on goal as well as 3 chance assists. Parise and Elias also had strong nights, even though they finished -2 and -1 respectively.  Parise led the team with 4 chances on goal and Elias set up 4 scoring chances.  David Clarkson was another forward who stood out.  He had 2 strong chances early in the 2nd and scored on a beautifully set up chance from Tedenby.

Mark Fayne and Henrik Tallinder led among the defensemen.  Not only did they each finish at +6 or higher but they also combined for 3 chances on goal.  I would also like to note the strong play of Nashville's top defensive pair Weber and Suter.  They did a good job of shutting down the Elias line and the Larsson-Greene pairing. 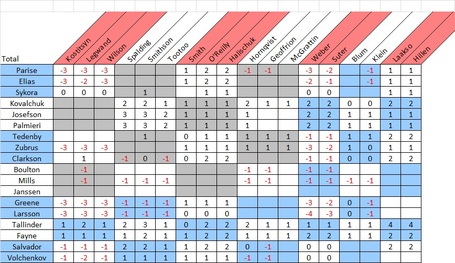