Do the New Jersey Devils Usually Play Fewer Games in October than Other NHL Teams?

Share All sharing options for: Do the New Jersey Devils Usually Play Fewer Games in October than Other NHL Teams?

The month of October began with the New Jersey Devils playing their final preseason game against Philadelphia and then waiting a full week before playing them in their regular season opener. After Saturday's game, the Devils will be idle until the following Friday against San Jose. After that, they'll visit Pittsburgh for their sole back-to-back game this month and then hit up the west with games against LA, Phoenix, and Dallas. The Devils will only play 9 regular season games in this first month of the season with plenty of time in between most of the games.

Every team has a different make up of games, but they will all play 82 by the end of the season. The Devils' light October schedule may be a benefit now; but it guarantees busier months later in the season for the team to catch up. The scheduling has led a few users here to wonder whether this is always the case. User Rory B. Bellows was irate about the scheduling. In response, here's what Triumph44 had to say:

to follow up on this, the rangers aren’t playing for 6 days.. twice. they also play 17 games in march. the flyers have one five day off stretch and a six day off stretch. last year was the anomaly – i feel like most years, NJ is behind the average team in games played.

The latter part piqued my interest. So did this response by user elesias:

It does seem that that is the case more years than not… that NJ plays less games earlier on and makes them up as the season wears on.

Random thought: I wonder if A) this perception is reality and B) it has any correlation with their slower starts in years past.

Naturally, I got interested in the topic and dug into past seasons. Do the Devils usually play shorter Octobers than other NHL teams? If so, how common is it? Could there be some correlation with a slow start to the season? After the jump, I attempt to answer all of those questions.

First, I want to highlight this comment by user Marty 4 Prez, who found out that the Devils do get a lengthy break (4+ days between games) in October in the 10 out of the last 11 seasons. Therefore, we can conclude that the upcoming 5-day gap in games should surprise no one given past schedules. Good work, Marty 4 Prez.

Moving on to the three questions, let's answer the title question first. Incidentally, I specifically highlighted the Devils' record in October and November since 1995-96 in this post. Let's use that same length of time to answer this question, which makes sense since the NHL has had an 82-game schedule in place since 95-96. I used the information from that post to count up the number of games the Devils played in October. Using ShrpSports, I sorted out the number of games played by each team by the end of October 31, the last day of the month.

The ranges of games played in October vary from season to season and from team to team. Given that the NHL season can start even a little over a week into the month or right at the beginning, there should be no surprise in the variation involved. What is a surprise is that the Devils have played more games than the average NHL team in October only once: the infamous 2010-11 season. Even then, the Devils never played as many games as the maximum among all 30 teams in October.

However, the Devils have been mostly around average when it comes to games played in October. Sure, 14 out of these 15 seasons show the Devils playing fewer games than average; but as indicated by it's value, the average isn't a feasible target to hit. An average NHL team either going to be right above or below it. In 9 out of these 14 seasons, the Devils are within a game of the league average. Only five times did they play at least one fewer game than the league average: 1996-97; 1997-98; 2000-01; 2001-02; and 2002-03. This current season could make it six.

Therefore, the real answer to the title question is really "sort of." I know that's a wishy-washy response. I definitely can't say "no." At the same time, while the Devils have been consistently below average; but usually it's within one game 9 times out of 14. That's not really enough difference to say the Devils noticeably play fewer games than other NHL teams, much less whether it "usually" happens or not. This season could count, but if it does, it would only be the first instance in over seven seasons. It's not that common of an occurrence compared to past schedules. Only once did the Devils get to play more games in October than the league average. Could the NHL schedule rectify this in the future? Given that they haven't yet, I wouldn't get my hopes up.

One question remains. Is there any correlation between the Devils having a slow start to the season and playing fewer games than average? Let's define what a slow start is first. Since the 1995-96 season, the Devils ended October outside of the East's top eight teams only six times. Yet, in only three of those seasons did the Devils earn less than a point per game for that month. Those seasons are 1996-97 (4-5-1); 2007-08 (4-6-1); and 2010-11 (3-8-1). I would classify such a rate as indicative of a slow start. In each of those three seasons, the Devils were below average in '96-'97; just about average in '07-'08; and actually above average in '10-'11. While slow starts haven't been too common for the Devils, it doesn't appear there is a correlation between a slow start and games played. (By the way, if you go by "outside of eighth by the end of October as a 'slow start'," there still isn't much of a correlation - the Devils were only below average in games played one additional time in '01-'02.)

One last point that is true: the Devils have been quite busy in November regardless of whether they played fewer games than the league average or just around it: 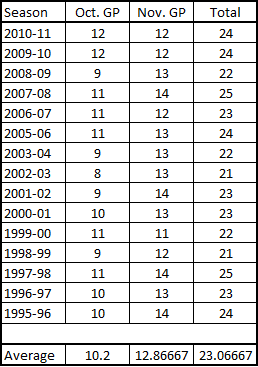 Only in 3 of the last 15 seasons did the Devils play as many games in November as they did in October. Elsewhere, the Devils have always had a lighter October compared to November. Given that the NHL runs through the entire month of November, it's a little understandable that there are more games to play. Still, it's a big jump in the schedule to play an additional 3 to 5 games between months. It'll happen this season, too. The Devils will play 9 games in October, and then 14 in November.

What do you think of the schedule this season knowing past seasons? Do you think the NHL will do something about it in the future? Please leave your answers and other thoughts about the Devils' schedule in the comments. Thanks to Rory B. Bellows, Triumph44, and elesias for the inspiration; thanks to Marty 4 Prez for finding out how common breaks were; and thank you for reading.