The Devils had a rough start against the Kings getting out chanced 7-1 in the first 13 minutes of the game.  Martin Broduer saw the first chance go by him but did some fantastic work stopping the others.  When Brodeur left after the first period the Devils where getting out chanced 7-5.  Johan Hedberg came in and didn't see his first chance against until about 7 minutes into the 3rd. Meanwhile the Devils had 9 chances in the last  two period and added 1 more in OT.

The top line against the Kings was Parise-Elias-Sykora.  Patrik Elias led the team with a +8 while Zach Parise and Petr Sykora each were at +7. The only other positive forward for the Devils was Kovalchuk at +1.  All four of those forwards tied for the team lead with 3 chances each. Elias and Kovalchuk put all 3 of their chances on net; Parise and Sykora got 2 on net.  Zach Parise also led the team with 5 chance assists.

The dominate defensive pair for the Devils was Greene-Larsson.  Adam Larsson finished the night at +7 while Andy Greene went +6.  Tallinder-Fayne struggled going -2, while the Salvador-Volchenkov pairing was able to finish the night at +1. 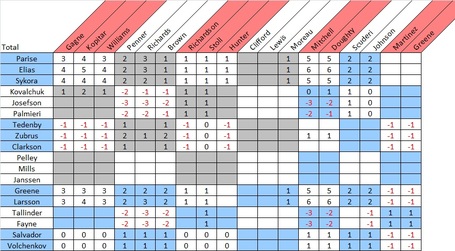