SB Nation and TiqIQ have been working together in promoting what the aftermarket has to offer in ticket sales for various sporting events. You may have seen their modules on other SBN blogs like Bloody Elbow, for example. Thanks to that partnership, there is a contest running across the SBN Hockey network where you can win two free tickets to a regular season game in December/January.  I repeat: you can win two free tickets to a New Jersey Devils game.  Entering the contest is free and all it requires is Twitter and some prognostication.  Here are the instructions on how to enter:

The following picture explains the same but also provides an example: 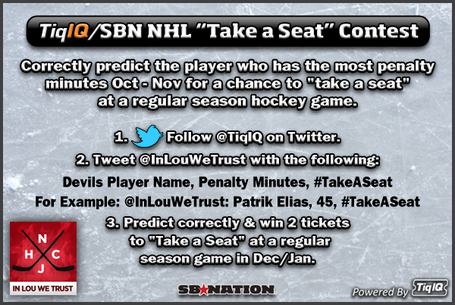