Yesterday, the Devils beat the Hurricanes 4-2 at home, clinching the team's first victory of the season. Three Devils also recorded their first goals of the season- Ilya Kovalchuk, Mark Fayne and Zach Parise. With this in mind, I plan on taking a look at Zach Parise's first goal of the season, as it was a very good example of how to score a goal. Plus, there are only four Devils goals anyways, and one was on an empty net. Review of the goal after the jump

Here's video of the goal via NHL.com, for those who did not see it.

Now that you've seen that, lets get to the review of the goal. The Canes on the Ice for the goal were Tuomo Ruutu, Jeff Skinner, Chad LaRose, Jay Harrison, Tomas Kaberle and Cam Ward. The Devils have Zach Parise, Patrik Elias, Petr Sykora, Adam Larsson and Andy Greene on the ice. 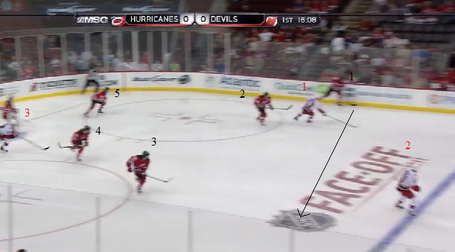 Here's the first frame- all the Devils players are numbered with black numbers, while the Canes are numbered with Red. Patrik Elias (1) currently has the puck and is getting ready to pass the puck to Sykora (3) on the right side. Jeff Skinner (1) is trying to block the passing lane. Elias will be able to get it past the young forward. The Canes defenseman, Tomas Kaberle (2) has to defend Sykora, while Chad LaRose (3) was behind the net fighting with Larsson (4) and Greene (5). The other two Hurricanes on the ice at the moment, Eric Staal and Jay Harrison are off the screen at the moment. 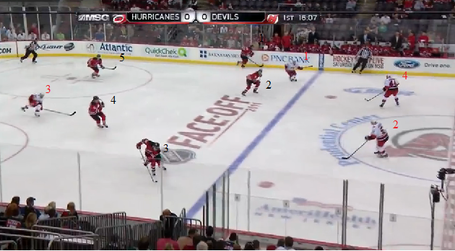 The newest Cane to appear on screen is Jay Harrison (4). Sykora (3) has the puck and will carry it into the neutral zone. Zach Parise (2) is heading towards center ice, and as we know, straight for the net. Harrison's job here is to stop that from happening. The other three Devils- Elias, Greene and Larsson are all heading up the ice while Larose (3) and Staal (off screen) are heading back. LaRose is trying his best to get back but Staal isn't. 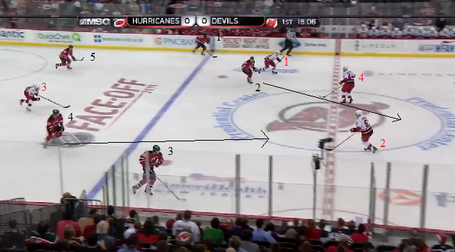 As you can see here, Skyora's got the puck into the neutral zone. Parise is still heading towards the net. Skinner (1) is trying his best to get back and help Harrison out with Parise, however, that turns out to be a bad idea in hindsight as Elias is lurking on the wing. Adam Larsson (4) is getting ready to jump into the play. Eric Staal is behind the play and still off-screen. 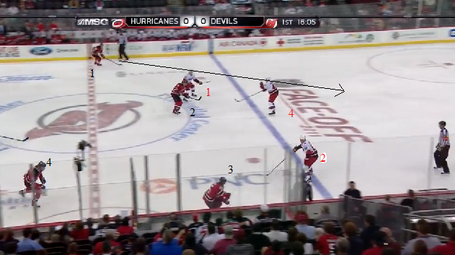 As you can see, Skyora has carried the puck up the ice and is ready to enter the neutral zone. Skinner is committed to Parise, and is completely unaware that Elias is still there. Larsson has joined in the fray and it looks like he's jumping in on the offense, while LaRose is still trying to get back into the fray (that's his stick, not Greene or Staal's). It also looks like Harrison's signaling to Skinner that he should do something about the impeding threat of Elias getting in the slot for a shot. However, Elias isn't going to head straight for the net. 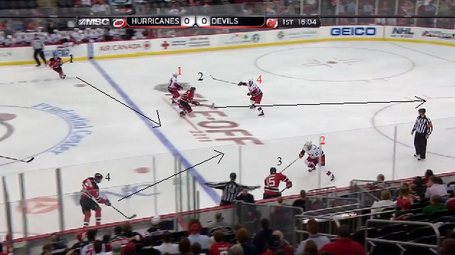 Instead, Elias decides to play sneaky and head across to center ice rather than going down the wing. Parise was able to stay on side, and continues straight to the net. Larsson jumps up into the play as well, and now the Canes are faced with a 4 on 3. Greene is staying back just in case Sykora gets picked off while it looks like Eric Staal is heading off for a change. Harrison is barking out orders and is trying to get Skinner to pay attention to Elias. 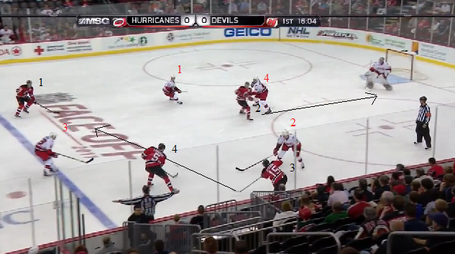 Skyora has just passed the puck. It's passed Larsson and is heading towards Elias, who is moving towards center ice. Parise keeps on heading towards the net, while Harrison tries to deal with Parise, who's crashing the net. Tomas Kaberle (2) can't do much to stop the puck from getting to Elias, while LaRose is a step behind and won't be able to do much in terms of stopping Elias from getting a shot. 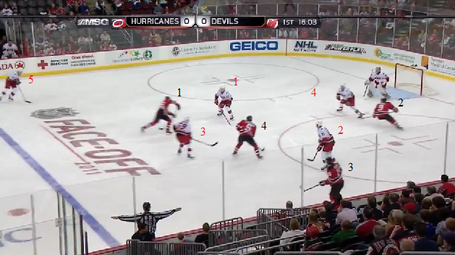 Elias is able to get his shot off. Skinner and Harrison provide a bit of a screen in front of Cam Ward. Skyora and Larsson aren't factors in this play anymore. However, just look at how disorganized the Canes are. Jeff Skinner can only watch as Elias unleashes a shot on Ward. LaRose can't do much either, and so can't Kaberle. Jay Harrison has left his man, Zach Parise, wide open. Tuomo Ruutu (5), just got on the ice and can't do much as he's way too far out of the play. 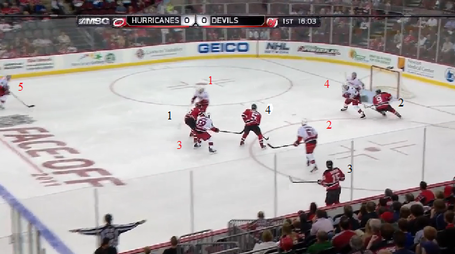 Elias has got his shot off, and as you can see, Harrison's let Parise get behind him. Ward makes the save but he's unable to control the puck and the rebound goes to Parise. Kaberle is nowhere near Ward and Harrison has no time to turn and stop Parise. The result? 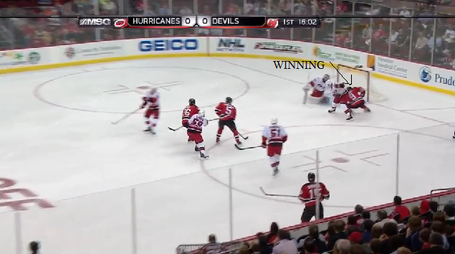 Who To Credit and Who to Blame

For the Devils, the credit has to go to the three forwards- Elias, Parise and Sykora. All three of them did a great job controlling and passing the puck. Parise did the right thing and kept going to the net, and as you can see, he was rewarded with a goal for his work.

For the Canes, the blame has to go to three people- Jay Harrison and Jeff Skinner.  Kaberle and LaRose did all they can- LaRose got back as fast as he could while Kaberle did all he could to stop Skyora from getting to the net. Skinner on the other hand, was too pre-occupied with Parise to realize that Patrik Elias was coming in from the sides. If he paid attention maybe Elias wouldn't have been able to get a shot on goal. Harrison did fine until he let Zach Parise skate by him. If he paid more attention to Parise than Elias the goal might have been prevented.

This goal is a good example of a very well executed play. The Devils passes were solid and they didn't take any bad shots. They also had someone go to the net and get dirty. On the other hand, the Canes didn't do that great a job defending. Two Canes lost their man and paid the price, leading to the Devils scoring their first goal of the 2011-2012 Campaign. So in conclusion- one team executed, while one team did not.